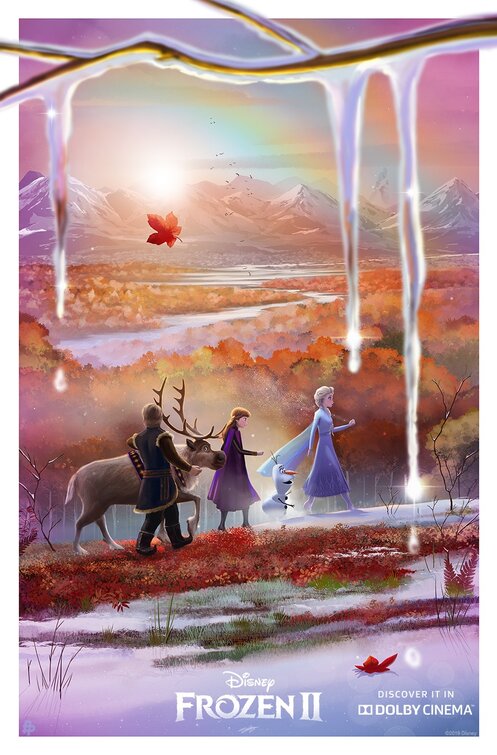 Step Into The Unknown

Set a few years after the events of Frozen, life in Arendelle is healthy and prosperous under the rule of Queen Elsa [Menzel], with her sister, Princess Anna [Bell] acting as counsel. But Elsa is troubled by a voice that calls on the wind which seemingly only she can hear. Torn between her duties as a ruler and the overwhelming pull to uncover its origin, Elsa accidentally (this is never exactly clear but I’ll come back to that) sends out a magical signal which throws Arendelle into chaos as elemental spirits attack the kingdom. In an effort to uncover both the origin of the queen’s powers and free the city from its curse, Elsa, Anna, Kristoff [Groff] and Olaf [Gad] set out to find an enchanted forest from the stories of their youth.

As with the first film, Frozen 2 delivers more lush Scandinavian world-building with detailed designs that are wonderfully evocative of their real-life counterpart and that’s before taking into account the sweeping vistas which offer truly breathtaking visuals. For all the natural flare on show, there is an equal effort put into animating the elemental effects and Elsa’s various magical abilities. Case in point, at one point in the story Elsa is trapped in a whirlwind which she disperses with an icy shockwave, leaving these half formed impressions that offer a really subtle but captivating visual. But I think a lot of the opportunity for these moments originates in the fact that Frozen 2 feels somewhat different to what has come before; less a contained palace melodrama, more a wide-reaching journey of discovery. Ultimately, the whole thing feels like a merging of the new wave of Disney’s show tune-heavy progressive tales and the darker adventure-driven tales that Ron Miller pushed for in the 1980s.

Anna and Elsa continue to be well grow as confident and driven heroines but there’s a decent balance ensuring that one doesn’t outweigh the other. It’s also refreshing that the film continues where the previous left off with a lack of a distinct and traditionally drawn adversary and that Elsa still doesn’t require a love element to function. I also appreciated the addition of Lt Destin Mattias, voiced by Sterling K Brown, and Kristoff’s subplot which, while incredibly rudimentary, was entertaining and didn’t feel the need to pull centre stage. However the really interesting point is OIaf and his maturity arc to mirror the ageing primary demographic (going so far to break the fourth wall to say “you all look a little older too”). Olaf continues to get the biggest laugh from the entire audience but there’s a pleasant sense of him slowly ageing and confronting darker themes with the same innocence.

Speaking of darker themes, there are plenty of them running throughout that address the problems that today’s kids are facing – whether they realise it or not. Having used Frozen to pick apart some of the classic Disney developments while still hitting all the classic tick-box tropes was an amusing bit of self reflection and mild hypocrisy. This remains present but the newer themes are much loftier, rather than being careful who you invest your feelings in, there are aspects of abandonment, depression, isolation, responsibility, climate change, colonialism (through the concept of a kingdom favourably dictating their history) and the responsibility on the youth to correct the mistakes of the past. Sure, a lot of this will go over the heads of the kids and many adult audience members will reject that they’re even there but for those that identify with these issues, the message will ring loud and clear and remarkably the majority of them are extremely well-handled.

Unfortunately, you can’t talk about a Frozen film without addressing the songs and holy crap there is an abundance of singing. Other than the prolific ear-worm “Let It Go,” Frozen’s songs weren’t as wide-ranging and well placed as the height of the 90s tracks but Disney have already refined this formula, as seen in Moana. But the very nature of “Let It Go” being so ingrained in the public consciousness means people will be unable not to make a comparison. It doesn’t help that the film’s songs feel like they follow the same pattern and styling of its predecessor; you only need to put Olaf’s 2013 and 2019 upbeat songs side-by-side to see that. Then there’s the direction of Kristoff’s song, with its cheesy 80s power ballad video homages that shouldn’t work but surprisingly do and feels very much a consolation for the adults who have been begrudgingly dragged to the cinema. But the real star of this entire show isn’t actually a single track but a simple haunting siren call leitmotif (penned by songwriting couple, the Lopez’s, returning from the first film) that I found both catchy, memorable and is incorporated beautifully throughout the entire score. Yes, the songs are what people talk about first but Christophe Beck’s deep and ominous score work continues to shine magnificently. I would also add, the disconnected title music from the first film is finally incorporated as a traditional song and it has now shifted from out-of-place oddity to greatly appreciated bit of foreshadowing.

I’m not the biggest fan of Frozen. I thought it was a fairly disappointing step after Tangled but appreciated the themes of sisterly love and the subversion of expectation. The sequel is no different and far from perfect but admittedly in different ways. Firstly, while I can spend hours praising the concept of a female-led family action adventure film, the film has a tough time getting the story rolling with a fairly clumsy opening scene. It probably doesn’t help that the actual opening scene (rather than the one I referenced in my synopsis) is a flashback with magic, sword fighting and overall portent. I would also add that there is a development between Anna and Kristoff that wasn’t as awful as it could have been but still felt incredibly forced and frustrating. On top of that, we have to contend with Elsa continuing to display infinite and unlimited deus ex machina powers that remain largely undefined to ensure they can be utilised as the plot requires them; blasts of ice? no problem, summoning CCTV-style memories from water? that’s a bit of a weird one. The twist of Queen Iduna’s identity was painfully obvious but thankfully the entire story didn’t rest upon the reveal, more the consequence of the actions she took, so we’ll skip over that. And finally, as much as I can happily laud this film for the important themes they weave into the narrative, I still have to look at Disney as a company and frown because of the sheer wealth of plastic merchandise the success of this movie will generate. I mean, keep it up, it’s important to discuss climate change in a way that our kids can understand it but maybe don’t simultaneously ensure that outcome becomes a reality?

A mere six years have passed since Frozen became the highest grossing animated film ever made (until it was dethroned this year by a fellow Disney title) but it will likely garner a Star Wars reception where nothing will ever surpass the feeling of familiarity that comes from watching a film on repeat several times per week for years on end. Subsequently it wouldn’t surprise me if audiences and critics mark this film down but have difficulty expressing why outside of “it doesn’t feel the same.” In many ways Frozen 2 is better than the first film, if only for its tight structuring and marrying of everything Disney is trying to put across as a company, but I doubt it will have the same lasting impact of the first one which, lets face it, no one saw coming. And while there will probably not be a third instalment, this outing offers a solid way to close Anna and Elsa’s story.

The Scene To Look Out For:
**spoilers in this section**
Anna is a very interesting character if only because she has no powers. She is not her sister and selflessly plays the role of the support throughout. When they are pushed away by Elsa, Anna and Olaf become lost and trapped in a cave surrounded by sleeping giants. This is a fairly bleak predicament but despair sets in for Anna when Elsa’s hubris causes her to be petrified and Olaf to – for lack of a better word – die. Everything about the imagery is dark but then we have the song “The Next Right Thing” which explains that while odds may seem insurmountable, you have to just focus on what’s in front of you, in over to put things right. Which anyone who has struggled with mental health will confirm, is essentially what every councillor would advise.

Notable Characters:
As stated before, Arendelle is caught in the grip of vengeful spirits that represent the four basic elements of earth, air, fire and water. Three of these spirits are individual characters – a gust of wind (usually represented by two leafs on a breeze) called Gale, a pink flamed salamander and a rather aggressive horse made of water. But the earth element isn’t an individual but in fact several giant rock monsters. I just found this a bit of an odd move.

Highlighted Quote:
“You don’t want me to follow you into fire? Then don’t walk into fire”

In A Few Words:
“More adventure focused, Frozen 2 will stand apart from Frozen but overall I feel it is in an improvement”