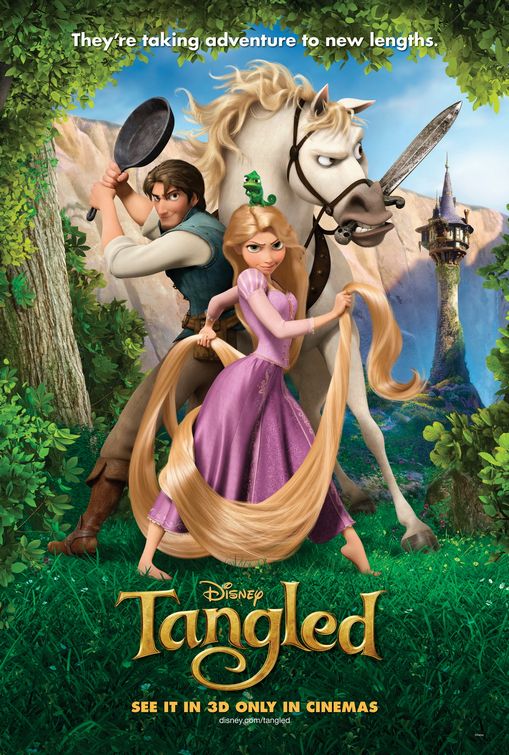 Around this time last year I reviewed The Princess And The Frog, Disney’s attempt to reclaim their place in the animated film market. I didn’t much care for it. It was a fairly enjoyable romp but they tripped over the classic Disney mistakes of subtle racism, stupid over-use of highly forgettable songs, ridiculous talking animals, etc. Having seen the trailers for Tangled, Disney’s take on Rapunzel and their 50th animated motion picture, my expectations were rather low. Thankfully, someone appears to have delivered the right message to the right people and for the first time since the 1990’s Disney have produced a lush, beautiful and exceptionally entertaining family film.

Setting the scene in typical Disney fashion, Flynn Rider [Levi] opens with a brief narration about a golden flower with magical healing properties that can replenish ones’ life when sung to. An old woman, Mother Gothel [Murphy], found the flower and selfishly kept it hidden, only using it for herself. Over the decades a kingdom rose in the area and after a time, the pregnant queen became ill. After a great search for the flower was undertaken, it was eventually located and fed to the queen. Subsequently she made a full recovery and gave birth to a baby girl, Rapunzel [Moore]. Seeking revenge, Mother Gothel seized the child and locked her in a high tower, visiting her only to renew her youthful appearance by singing the same song she sang to the flower. Forlorn and grief stricken over the loss of their daughter, the king and queen launched thousands of glowing lanterns each year on her birthday. Some fifteen years later, swashbuckling rogue and thief, Flynn takes part in a grand larceny before being chased by the palace guards. After evading his pursuers, he scales a solitary tower and hides himself, only to be assaulted by Rapunzel. Having been forbidden by her mother to ever leave the tower and fascinated by the glowing lights in the sky each year on her birthday, Rapunzel makes a deal with Flynn that she will return the item she stole from him if he agrees to take her to the lights and back. Naturally, Flynn agrees and off they set to the palace to witness the yearly festival, all the while followed by the covetous Mother Gothel.

Disney have had a rough track record of hits and misses and with Pixar failing to produce a bad film, they simply have to create more fine work of this calibre. It’s as if a check list of everything people love and hate about Disney has been created and keenly followed in order to produce something appealing to all ages: dashing hero, trapped princess, comical animal characters (that DO NOT talk), upbeat songs but not too many or too long, swashbuckling adventure, peril, danger, humour, romance, etc. both modern and traditional, it walks that fine line of decent family cinema. The 3D element was far from necessary (it’s a bloody gimmick that deserves to die a long and slow death!) but also in no way overbearing, merely adding depth to the canvas, as opposed to a gratuitous opportunity to fling things at the audience. Despite the impressive CGI, the pleasant script-work, extremely endearing characters and keenly crafted pace, there are still glaring flaws; the first being the songs. There are only fifteen Disney songs that I think are not only memorable but actually well composed, the rest is just fodder – and yet every Disney release has to contain at least five original songs. The ones used here weren’t nearly as bad as they could have been and at one point a musical dance routine was favoured over an actual song but if they’re going to bother they really need to craft something epic and original. Secondly we have the villain, Mother Gothel. She’s in no way evil, just incredibly selfish, which should make her a more realistic ‘bad guy’ but ultimately she just lacks the screen presence of past Disney villains.

Overall, this is a real return to form for Disney and if they can continue to raise the bar, they will be well on their way to producing quality work once more.

The Scene To Look Out For:
Shortly after Rapunzel’s first trip outside the tower (and the obligatory song, prattling on about it), Rapunzel has bi-polar moments of extreme joy and crushing depression. The scale of the indecisive escapee’s back-and-forth and the way in which it’s edited is such that it produces an incredibly amusing and memorable little scene. Either that or the festival of lights thingy.. simply for the fact that it’s visually gorgeous – far from groundbreaking but certainly easy on the eyes.

Notable Characters:
It’s rather hard to pick just one character. Rapunzel herself demonstrates immense naivety neatly combined with a feisty curiosity – much like The Little Mermaid’s Ariel. The two creature characters are also welcome additions, despite the fact that I turned around in the cinema and muttered, “Why the hell does she have a chameleon? How does that fit in?” Both Maximus and Pascal should be cliché and irritating but their antics are incredibly entertaining. But ultimately, Zachary Levi channelling Nathan Fillion is one of the highlights. If you have no idea who I’m talking about, Flynn is pretty much the embodiment of a rather talented TV actor (more aptly a combination between Fillion and Errol Flynn).

Highlighted Quote:
“Hey, can I ask you something? Is there any chance I’m going to get super strength in my hand? Because – I’m not going to lie – that would be stupendous”

In A Few Words:
“Charming, humorous, romantic and thoroughly entertaining, Tangled is a wonderful rebirth for Disney’s animation studios”