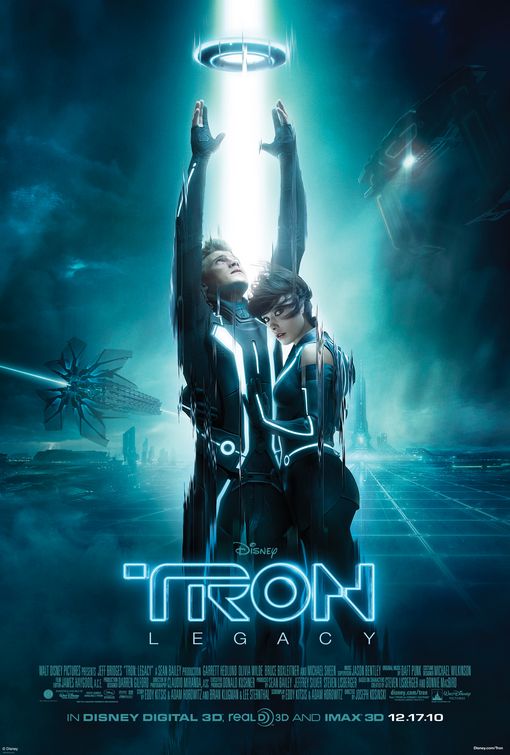 The Game Has Changed

I’m not sure which is more important, initial impression or reflective review. It’s a difficult point to consider and one I’ve never really been able to settle on. Strangely enough, Tron is one of the prime candidates for this argument. As a young boy, I recall watching Tron and other than the action sequences, I found it a little slow. Several years later, I readdressed the film and came to the same conclusion but felt a great deal more positive about the whole thing. Nearly thirty years later, Disney have finally managed to produce a sequel and it is my firm belief that this film is every bit as good/bad as the original Tron, same cutting-edge technology, same stunning visuals, same ropey story, same under-developed character arcs. The question is will the initial impressions or reflective thoughts prove to be more important to the success of this release?

Starting in the mid-eighties, software designer, Kevin Flynn [Jeff Bridges] disappears, leaving his IT empire (ENCOM) to his son, Sam. Several decades later Sam – played by Garrett Hedlund – is depicted as a reckless youngster, living in isolation, refusing to take responsibility of ENCOM. Following his yearly stunt (in this instance, uploading the latest ENCOM program online for free), Sam is confronted by Alan Bradley [Boxleitner], who explains he received a page from Kevin Flynn’s arcade – a number disconnected for over twenty years. Sam reluctantly agrees to investigate and upon arrival at the arcade discovers an underground workshop. Curious to learn what his father was working on, he begins tapping away at the active computer. Seconds later, Sam is transported into the computer and onto ‘the grid’. Ok, I’m just going to take a break for a moment. You’re all following me, right? I’m assuming you’ve all seen Tron and you get the concept? Good, ’cause trying to explain all this in detailed layman’s terms would be irritating. Where was I? Oh yes, Sam is now in the grid and forced to compete in the games, much like his father before him in the original film. After he proves himself, Sam is introduced to the individual in charge, who looks like a completely un-aged version of Kevin Flynn. It is quickly revealed that this is Flynn’s master program, Clu. Obsessed with creating the perfect world and worried of becoming obsolete, Clu turns on Flynn and exiles him. Sam is then saved from the games and brought to the real Kevin Flynn, now a great deal more aged and wizened, by the sprightly female program, Quorra [Wilde]. With the use of a great deal of expository discussions, Kevin reveals that Sam is now stuck as he was, for the only way to return to the real world is via a portal at the centre of the grid, which is heavily guarded by Clu.

As stated, this film is much like the original in the sense that it has copied across all its pros and cons. Visually speaking, this film is exquisite; granted the ‘young’ Jeff Bridges looks a tad shaky in places but overall, the combined effects, cinematography and overall look and feel are superb. In perfect sequel mentality, just enough nostalgia and revisited lines have been brought back to perfectly recreate this world for the fans, while introducing just the right combination of new elements to offer something different. Additionally, one of the more overlooked elements, sound design, is also exceptionally well executed and the whole sound editing process has been very well handled. Then there’s the score, presented by Daft Punk, which beautifully combines the epic scope of a thundering orchestral score whilst truly capturing a very distinctive electronic 80s sound. Ultimately, the most interesting part of this film is the philosophical, religious and technological subtexts that clearly influence both plot and character. The opportunity to analyse impermanence, godlessness, reason, existence, programming, etc, is certainly present (maybe more so than in the original) but never explored enough to annoy people – ie. The Matrix sequels. Given this, it’s entirely possible to sit down and give a complete translation of the film through philosophical and religious texts but never necessary.

Even with the original, acting and characters were never exactly the greatest foible and bar Jeff Bridges and David Warner, one could say that Tron was a little flat acting-wise. It’s no different here, Jeff Bridges is still the greatest thing going for this release while everyone around him attempts to catch up. Hedlund provides the typical 2D angry kid hero, Wilde plays the somewhat naïve warrior lady by the book and Michael Sheen goes a tad over the top as the entertainment program (but considering how vile the internet has become, we shouldn’t really be surprised by this extremely hedonistic manifestation) but everyone could have been a great deal worse. Curiously enough, while Tron slowed down considerably in the second act, Tron: Legacy wastes an ideal opportunity. After reuniting Sam with his father, they proceed to share a handful of stories, one after the other, which would have been far more interesting to actually watch. Sure, we get to witness a few brief frames of Clu’s betrayal and Tron’s demise but actually following these elements would have made for a much more engaging and entertaining story. But the biggest problem Tron: Legacy faces, is its predecessor: essentially, if you haven’t seen the original Tron there would be too many questions. Sure, I imagine you’d enjoy the film but this is a sequel and no amount of explanation, recaps or back-story is going to replace the experience of watching the first part of this story. Yet in Disney’s wisdom, they have decided to pull all copies from general retailers, meaning at this time, you’d be hard pressed to find a copy of Tron – and it is my opinion, that for this reason, Tron: Legacy will suffer at the cinema.

The Scene To Look Out For:
This whole film is a visual spectacle and as such, picking a dialogue-heavy scene seems a touch obscure. If anything I would go with either the light cycle battle or Clu investigating Flynn’s hideout. Obviously, the light cycles were the highlight of the first Tron film and they were always going to be a welcome return. Without wanting to give away or spoil too much, Clu manages to track down the location of Kevin Flynn’s secret .. house .. thing .. and examines the layout and intricate décor designed by his creator. It’s a pretty short scene but greatly entertaining nevertheless.

Notable Characters:
This could never be anything but a Jeff Bridges film. As a sequel this should be a launch pad for the ‘new hero’ with a heavy cameo or substantial supporting role for the previous star. But in this case, Mr. Bridges manages to play the aged, slightly warn out Kevin Flynn as well as the dastardly, energised Clu. The audience may spend so long watching the CGI face of the younger Bridges, looking for the imperfections that they may forget entirely that he is still acting credibly in both roles. There have been a few noted complaints about Big Lebowski comparisons but I honestly couldn’t give a toss about them. At the end of the day, this is supposed to be a man trapped in a system for twenty years, it’s very likely his mannerisms wouldn’t completely change and that his crazy lingo would sound dated and silly when spoken by an individual of senior years. Still, he gives two fine performances and if the Tron series progresses to a third film, he will be sorely missed.

Highlighted Quote:
“The thing about perfection is that it’s unknowable. It’s impossible, but it’s also right in front of you all the time. You wouldn’t know that because I didn’t, when I created you. I’m sorry”

In A Few Words:
“As with the original, Tron: Legacy is a sublimely beautiful example of effects-driven cinema but in dire need of better story and superior dialogue”