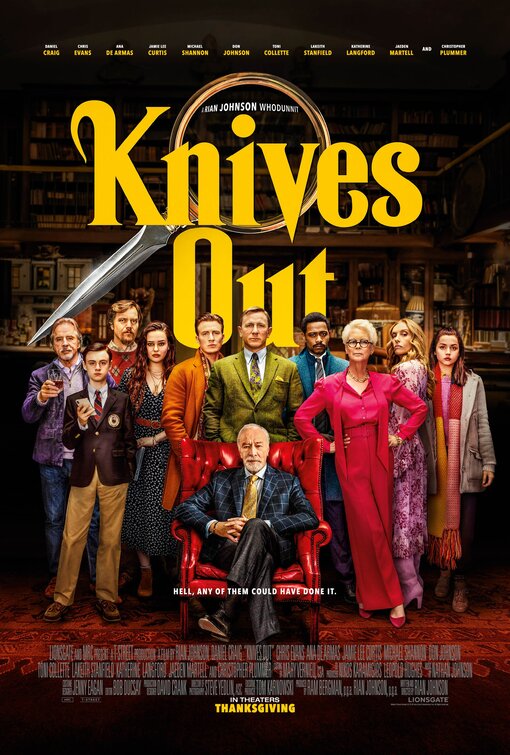 Hell, Any Of Them Could Have Done It

In the wake of the suicide of prolific crime writer, Harlan Thromby [Plummer], on the night of his 85th birthday, famed private detective Benoit Blanc [Craig] is hired to investigate the suspicious circumstances surrounding the death. Subsequently, Blanc has all of the family members present interviewed and we slowly uncover that everyone has a potential motive with something to gain from Thromby’s demise. All except his nurse, caretaker and friend Marta Cabrera [de Armas], who has a strange disposition of being unable to lie without violently vomiting. Because of this, Blanc decides to keep Marta close as a confident as he goes about his investigation and uncovers the various secrets the family members do not want explored.

Filled with Johnson’s characteristic whimsy and playing to his love of narratives based on Rashomon style character perceptions of shared events, Knives Out is a true breath of fresh air. It wastes absolutely no time, painting an intriguing picture with clues and foreshadowing masterfully laid out, ensuring the audience is hooked and drawn in by both the circumstances of the suicide but also the ridiculous characters brought to life by a truly magnificent ensemble cast. On top of that, apart from the end of the second act, where everything loses a little steam, this film has great energy and pacing with a surprising amount of political undertones and arguments that make this an oddly perfect Christmas/Thanksgiving film as well as contemporary social commentary.

In terms of direction and cinematography, this film is littered with references, nods and homages to decades of classic thrillers and the camera largely relies on static shots, glides, pans and dolly zooms. Thus it is a very noticeable shift when Marta leaves the house following an event (this review was so much longer but I decided to remain 100% spoiler free, so my apologies for the ambiguity) and the entire scene comes off the tripod and is shot almost handheld. As a representation of the chaos and discordance for both our lead and the story, it is a beautifully simple but effective piece of direction. Perfectly complimenting the dramatic thriller side of things, there is an extremely powerful vein of humour running from end to end and everyone has a genuinely memorable moment or line that highlights this perfectly. The whole thing is very reminiscent of something like Kind Hearts And Coronets and countless other Ealing Studios films.

Following up her standout performance from Blade Runner 2049, de Armas is a joy to watch and with Marta being so wonderfully pure, creates a sympathetic co-lead that we want to survive the viper pit of her duplicitous employers. I would also add this is the most enthusiastic and engrossed I’ve seen Daniel Craig in years. Full of personality and absurdity verging on caricature, he is clearly having an exceptional amount of fun with this role but manages to keep it grounded enough to ensure said caricature is never realised. A prime example of this takes place in the third act as Blanc is giving the classic final exposition, unravelling the entire case for the audience, manically rambling about doughnuts within doughnuts. It may sound odd but it’s fantastic. To save this becoming a bullet-pointed list of endless praise (which I could quite happily do), I will just summate that there isn’t a single dud performance. Every single actor brings a wealth of energy and talent to their role, no matter how small and makes for compelling viewing throughout.

In all fairness, Knives Out isn’t especially original or ground-breaking but by revisiting a long absent genre, it feels fresh and exciting. It also helps that Johnson has assembled a cast of extremely capable serious actors to indulge in devilishly wicked performances without a single ego getting in the way of telling a captivating, lively and wholly silly tale.

The Scene To Look Out For:
**spoilers – I know I said that I was trying to keep this 100% spoiler free but this is as close as I can get**
It is quite the novelty to solve the mystery extremely early on by showing the actual events. I had my initial concerns that by doing this, the film would become farcical or dull but by doing this it gives the audience an added element of tension while Blanc tries to solve the case, despite the fact that the viewers know when he is getting hot or cold. But then, just when we are lulled into a fall sense of security and complacency, the story twists again and we are given another level of mystery which becomes doubly intriguing for the very fact that we do not have this information to hand. It’s a marvellous example of a master director establishing the rules the film will follow and then surprising you by revealing that you too are a component in this game; mirroring the line Jamie Lee Curtis’ character says about her father playing games and communicating in code for those who know what to look for.

Notable Characters:
Absolutely every member of this cast is a treat to watch and highlight just one has been bloody difficult but as a source of constant comedy, with his fanboy glee is the supporting detective, Trooper Wagner played by Noah Segan. A subtle and simple portrayal but as one of Johnson’s regular players, he never disappoints.

Highlighted Quote:
“A strange case from the start, a story with a hole missing in the middle… a doughnut”

In A Few Words:
“Extraordinarily fun”