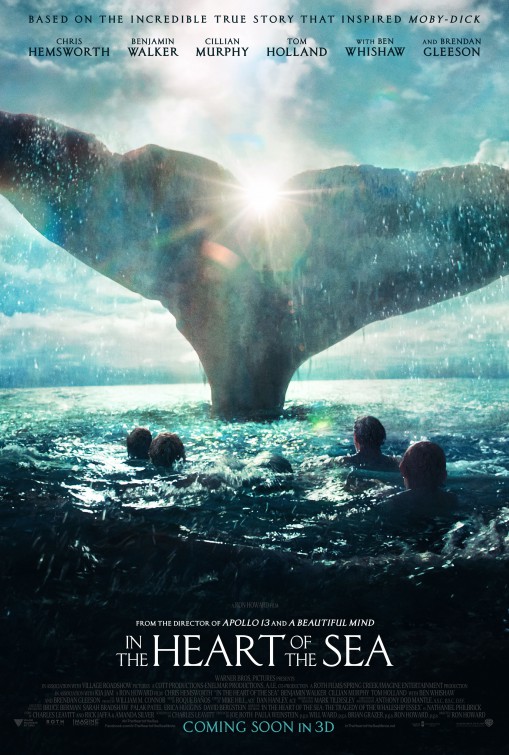 Based On The Incredible True Story That Inspired Moby Dick

Despite a crippling fear of whales (seriously) I have actually read Moby Dick and quite frankly it’s boring as hell; heavy with the trivialities of the whaling business. Subsequently, not a great starting point. But Moby Dick itself is based on true events and as is always the case, the real life story is more gripping and far-fetched than fiction.

In The Heart Of The Sea opens in 1850 with author Herman Melville [Whishaw] seeking out the last living survivor of a doomed whaling ship. Melville tracks down Thomas Nickerson [Gleeson] and pays him everything he has to hear the real story of the Essex’s fateful final voyage. Nickerson is hesitant but finally acquiesces. The story then shifts to 1820’s Nantucket (an island off the coast of mainland Massachusetts) and we are introduced to the very capable seaman Owen Chase [Hemsworth] as he is assigned the position of first officer under the inexperienced Captain George Pollard [Walker]. Friction between the two is immediately expressed as jibes about entitlement, lineage and achievement are exchanged. The Essex is put to sea and we meet Nickerson aged fourteen [Holland]. Not long after embarking, the crew encounter a squall and conflicting orders between Chase and Pollard leave the ship battered by the storm. After several months of sparse results, the officers hear a tale of a monstrously huge bull Sperm whale which protects a school of hundreds of unfished whales. Desperate for a good haul, the men set further to sea than is generally preferred and happen across their prize. However, as warned, the whales are protected by a battle-scarred alpha which dispatches one of the rowboats before targeting the ship itself. With lives lost and miles from any known shore, the crew’s nerves are shot and it isn’t long before supplies wane and alternative food sources need to be addressed. I’ve missed a huge section of the story there but this is just a synopsis of the key points, so you’ll have to forgive me.

So much works for this film, the production design is richly detailed from the costumes, hair and make-up to the living, breathing Nantucket port town. The cinematography also lends an extra layer with its cloudy lenses, vignetting and colour aberration to imitate 19th century photography. In fact, from a technical standpoint, the film is decently proficient. I’ve heard several complaints about the visual effects but if I’m honest they weren’t nearly as bad as they could have been and apart from a few fast-paced rowing sequences, everything looked acceptable. On top of all that, Roque Banos’ score is fitting, producing elation, tension and despair. But for a high budgeted period drama, these are the elements we sort of expect to succeed effortlessly and sure enough there are a few standout problems that effectively scuttle the entire release.

First of all, the acting is not bad. From all involved no one actor can be highlighted as a weak element. Having said that, no one actor conjures anything of merit to standout from the rest and for a film dealing with desperation, suffering, animal attack, cannibalism, death and survival, that simply isn’t good enough. A lack of supporting character development means that when the crewmembers start to perish and are later consumed, next to no connection has been made. Thusly, any empathy for these men is purely surface level and their strife is marked by the audience but not felt. This brings us down to five key roles: that of Chase, Pollard, young and old Nickerson and Melville. All five of them perform dutifully and as actors, I think each is incredibly talented but any truly memorable moments are only gleaned and each stumbles predictably through their character’s arc. Chase is steadfast from start to finish and his stoic nature can easily be misconstrued as underperforming from Hemsworth but I don’t think that’s the case. Benjamin Walker is an extremely underrated actor and while he holds himself well as the ill-fated captain, his stubbornness and misfortune is regrettably almost abandoned in the second half. Gleeson and Holland as Nickerson give admirable performances but as stated, nothing befitting the plight they are enduring/have endured and Ben Whishaw’s Melville is curiously keen but I didn’t believe his motivation enough; as the film wound to its conclusion I didn’t really care for the briefly touched upon home life or the fear that his work wouldn’t do the tale justice. But of course, all of this is irrelevant because for many audiences, the only real talking point is the accents. As stated earlier, Nantucket is an island off the state of Massachusetts and as such isn’t exactly a Boston accent as several have claimed it to be. I can’t attest with any authority that the accents I heard were accurate in any manner of speaking but they in no way impeded my enjoyment of the film. Once you aurally tune yourself to the unusual vowel usage you just adapt and watch the film – but for certain cinemagoers, this is not possible and they like to hear simple contemporary accents. Poor bastards.

In truth, it’s the pacing that utterly kills the film. Bound to the source material (except when it comes to the framing device which, to my understanding, is entirely fictional) In The Heart Of The Sea opens well, setting the tone and historical period for uninformed audiences, only to peter out for the second hour. Unfortunately, this is somewhat unavoidable as once the crew are without ship and stranded at sea there is little for them to do but survive with few day-to-day developments. But while we could be forgiving, this is Ron Howard we’re talking about. He’s effectively executed a very similar release in the form of Apollo 13 and that worked perfectly from start to end. On top of that Life Of Pi managed it but I think that’d be considerably unfair owing to the vastly superior source material. Even still, the film bolts out of the gate from the off but then loses both heading and speed, leaving us with a sort of listing affair that drifts aimlessly to an anti-climactically handled moral conclusion.

Interestingly, the whale hunting itself is handled quite tastefully, skilfully avoiding glorification and anachronistic self-doubt. I genuinely believe there’s no sense in rewriting our history just because we have evolved (to a degree) to understand this kind of act is wrong. But in addition to the split pacing, the film’s biggest downfall is that it doesn’t know whether it’s a heroic feat of human endurance or a warning of man’s petulance, arrogance and violent nature. Subsequently, I’m not sure if Ron Howard was the right director for this project. What this movie needed was someone who respects nature (without being a bleeding heart about it) and absolutely hates humans. Sure, it’s hard to root for the villains to survive but that’s essentially what we’re talking about here and with Howard’s favouring of straight forward emotionally driven stories, he doesn’t seem to get what this film could have been. In real life, the crew were doing a high demand job out of necessity but they were also miscreants – the script neatly omits a sequence wherein the real-life Essex crew started a fire as a prank and burned down an entire island. The whale should have been the personification of nature’s vengeance, a terror borne to bring balance. What I’m trying to say here is that this film should really have been Godzilla.. but about oil farming instead of nuclear weapons. In summation, while it’s not perfect, it’s pleasing enough and an average winter release but nowhere near worthy of the cast, crew or subject matter involved.

The Scene To Look Out For:
Everything about this film hinges on the whale attack. But this is very much a double-edged sword for after the blockbuster sequence the film has nothing left in its bag of tricks. There is a smattering of interesting scenes and encounters but overall the film is spent and audiences quickly feel the same fatigue.

Notable Characters:
As I said before, there is no one standout performance in this film and I genuinely stand by that. I can think of a performance that was agreeable or disagreeable. Or even that memorable if I’m honest. The only one who came close was Frank Dillane as Pollard’s cousin, the overly outspoken and entitled, Henry Coffin (in real life Owen Coffin but renamed to avoid confusion).

Highlighted Quote:
“The story of the Essex is the story of two men; Captain George Pollard and first mate Owen Chase”

In A Few Words:
“An acceptable nautical period film but lacking a clear message and steady pacing it suffers horribly” 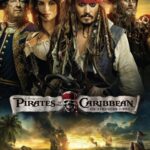 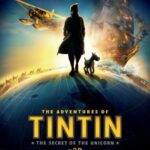 THE ADVENTURES OF TINTIN 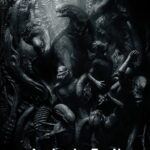