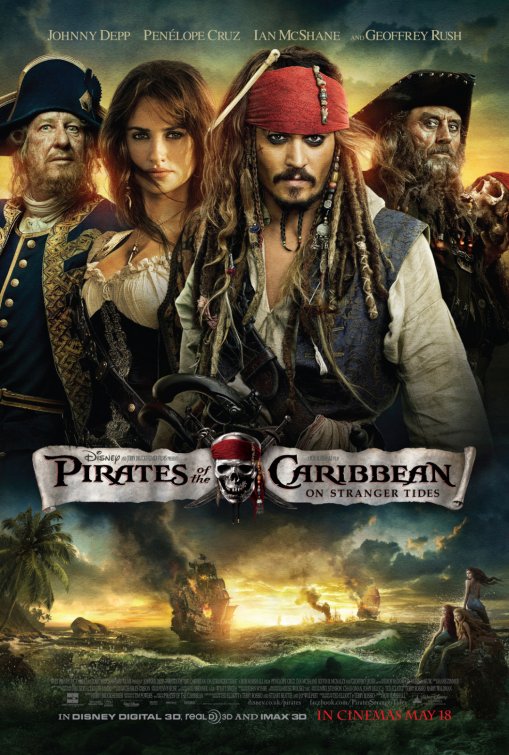 I think it’s safe to say, we all knew that Pirates Of The Caribbean was too big a franchise to leave at three parts. The question as to the series’ success was always down to whether the new direction would learn from the mistakes made in the two sequels: namely they tried to fit too much into a small space and introduced far too many convoluted plot devices, whilst leaving others to simply fall away unanswered. And despite being a loose adaptation of Tim Power’s novel, it would appear not a single lesson has been learned.

Opening in London, Gibbs [McNally] has been mistaken for Jack Sparrow and put on trial for crimes against the crown. During the court proceedings, Sparrow [Depp] himself poses as the judge and finds the defendant innocent of being Sparrow but charges him with life imprisonment. Escorting Gibbs supposedly to freedom, the two pirates discuss an imposter recruiting a crew to sail to the fountain of youth. Before they have a chance to investigate the matter, their carriage arrives at the tower of London and Sparrow is brought before King George II. Here we learn that the king wants to obtain the location of the fountain of youth before the Spanish; to ensure this happens, the king has enlisted the assistance of privateer, Captain Barbossa [Rush]. Jack refuses and once again manages to escape in a rather elaborate Rube Goldberg-esque series of events. Following a mediocre fight sequence, Jack finally discovers the identity of his imposter is in fact his former lover, Angelica .. er .. something or other [Cruz]. Her reason for recruiting a crew is a last-ditch attempt to save her father’s soul, her father being none other than notoriously feared pirate, Edward ‘Blackbeard’ Teach [McShane]. So, they all (Blackbeard, Barbossa, the Spanish) reluctantly set off to the fountain of youth, try to find two silver chalices, capture a mermaid, ship in a bottle, rum jokes, pig in the woods, blah-di-blah-di-blah.

First of all, there needs to be a clarification that this film is not nearly as bad as everyone is claiming. There are several foul elements but no worse than those previously utilised in Dead Man’s Chest or At World’s End. Taking a step away from the familiar elements of the series (namely reoccurring characters) was a wise decision but in trying to cover so much ground with so few characters, the script makes the fatal error of continually separating the crew. You see, one of the key elements to the success of the first film was getting these entertaining characters together, have them riff off one another as they’re stranded at port or on a ship and string it together with a reasonable story and praiseworthy action sequences. As with the last two Pirates films, rather than building a dynamic relationship between the leads, they’re forced off on their own random side-quests and personal agendas. Additionally, the race between the Spanish and the British was a nice touch of genuine historical rivalry but dismissively handled.

**Spoiler at end of paragraph**
The most common defence I’m hearing at the minute is the mermaids: ‘Oh, the mermaids were good’ ‘the mermaids were the best part’ ‘I really liked the bit with the mermaids’ yeah yeah yeah, they were very pretty and all but for one hundred and fifty million dollars they fucking should be! My problem is they looked great but no one knew what to do with them. Vicious mermaids serenading sailors before feasting upon their flesh is just the right level of macabre for a film of this nature but taking one ashore, who falls in love with a priest — that was just stupid. Moan about whatever you please but that was the worst factor. Forcing some pointless Twilight fish-lady love story would have been fine if it had been decently conceived and well structured. Instead all we got was a pair of actors who had little to work with other than filling the romance void left by Knightley and Bloom. Most frustratingly, their plot thread has no conclusion, they’re merely submerged for a ‘to be continued’ storyline in the next film – an act which is not nearly the clever plot device the writers believe it to be.

As stated, this film is not nearly as bad as people are making it out to be and there are several positive elements. First off, Hans Zimmer has started to enter renowned territory for his increasingly impressive scores. Combining the familiar themes and stings with a new eerier, darker element, the musical is not only complimentary to the on-screen developments but perfectly commendable as a stand alone composition. As with each film in the series, the costumes, sets and production values are flawless and everyone looks the part, despite the minor anachronisms. The casting is equally solid, with the inclusions of Ian McShane and Penelope Cruz fitting perfectly. My biggest complaint would be the random Judi Dench cameo in which her only line is “Was that it?” And then there’s Sparrow. The more you show of Jack, the more 2D he becomes – except for various outstanding moments (the “Oh, there’s nobody there” comes to mind), this seems to be a perfect case of too much of a good thing. I’m not saying any of he cast have done a particularly poor job because almost everyone does given thoroughly noteworthy performances, the problem lies with the scenarios and expeditions they are forced to undertake.

All-in-all, it’s a pleasing watch but if the series wants to continue, there needs to be a dramatic reassessment of direction, purpose and character drive – without that, we have little to look forward.

The Scene To Look Out For:
Of all the spiralling scenarios and undertakings, I’ve decided to highlight the most frustrating moment – granted, it’s a brief moment but one of vital importance. During Sparrow’s escape from the tower, one of the guards calls out for reinforcements then places a sword and musket on the table that Jack is hiding behind. With these arms he is able to vacate the premises and begin his stupid carriage chase through London – Bullshit, I say! Utter bullshit! Who in God’s name puts down a musket and sword when chasing a criminal? You give me a valid reason and I will bow to you as the greater celluloid analyst.

Notable Characters:
As with Rush’s portrayal of Barbossa, Ian McShane is finely cast as the ruthless and terrifying Blackbeard. As much as I enjoy Depp’s performance, it’s these two individuals who actually feel like genuine, cutthroat, I’m-a-rape-ye-daughter-ya-scabby-landlubber pirates.

Highlighted Quote:
“If I don’t kill a man every now and then, they forget who I am”

In A Few Words:
“Frustratingly typical sequel fare littered with a handful of pleasing moments” 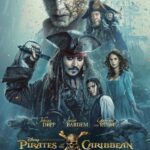 PIRATES OF THE CARIBBEAN: SALAZAR’S REVENGE 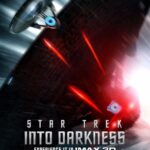 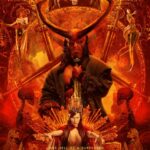