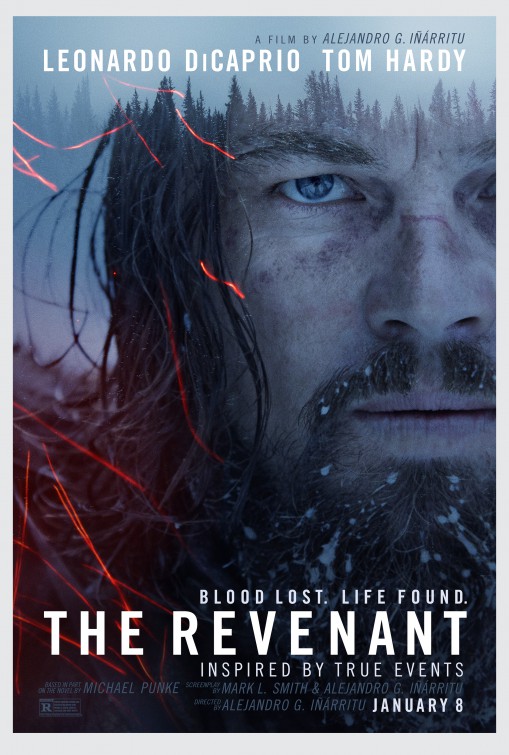 The Revenant is a very simple linear series of events following a group of trappers in the vast Territory of Missouri during the 1820s. The group are led by Captain Andrew Henry [Gleeson] who does his best to govern his men like a military outfit in their pursuit for profitable trade of furs. Unfortunately, the territory is also home to the native Arikara Indians, who set upon the group almost immediately, reducing the party from forty strong to barely ten. Feeling they are still being hunted, Henry’s men debate their best course of action. The half-scalped John Fitzgerald [Hardy] recommends recovering as many of the pelts as possible to ensure maximum profit but Hugh Glass [DiCaprio], the group’s guide accompanied by his teenage half-Powhatan son, recommends trekking the difficult terrain on foot and returning for the pelts later. Shortly after this, Glass is alone and accidentally stumbles across two bear cubs, the mother isn’t far away and brutally shreds the potential threat. Glass manages to get a shot off and finish the bear with his knife but his wounds and the limited medical care available mean his outlook is bleak. Fitzgerald, seeing the opportunity to make a little cash and keep the party moving, volunteers to stay behind and bury Glass when the time comes. But it’s not long before Fitzgerald attempts to suffocate Glass, only to be caught in the act by Hawk, whom Fitzgerald murders. After being abandoned, Glass slowly recovers his strength and crawls his way back to civilisation and revenge.

**Spoiler in the final two sentences**
Perfectly executed cinema is about immersion. Things like misheard lines, continuity issues, plot holes and visual effects can be entirely dismissed if you are immersed and believe the imagery presented to you is real. I genuinely believe The Revenant is a visceral truly immersive experience and as such I am utterly amazed nobody died making this movie. In a way, it felt reminiscent of films set during the Vietnam War; the concept of being constantly surrounded and continually hunted in a harsh unforgiving environment. With that in mind, it also has a bit of an Aguirre quality to it too. Narratively speaking, there’s a nice parallel between this release and Chan-wook Park’s Vengeance trilogy, which deals with the nature and futility of revenge. A clear example of this is the fact that through flashback we witness Glass killing the men who killed his wife but he is still haunted by her image. In the same way, even as the film draws to a close, visions of Glass’ wife still come to him, cementing Fitzgerald’s words that no amount of vengeance will bring his family back.

I’ll save my thoughts on DiCaprio’s performance for later in this review and for the time being focus on the supporting roles. One of the criticisms Black Hawk Down faced was the inability to distinguish the various characters. The Revenant has a similar issue, with little time devoted to humanising or exploring the swathe of beardy, fur-clad men it’s rather tricky to highlight standout individuals. Having said that, four clear supporting roles are afforded development. The first is Tom Hardy as the unscrupulous, self-serving Fitzgerald. He essentially represents everything pragmatic and heartless about humanity. Again, to draw on an example made earlier, he feels like that Vietnam commander who’s gone off the deep end and no longer sees the enemy, his men or his surroundings as real-life, operating under a personal code of conduct rather than one of collective moral and legal standing. Hardy performs admirably elevating Fitzgerald from complete villain to almost relatable, misguided victim. Secondly we have a commanding performance from Domhnall Gleeson, who is continuing to shine as his career quickly blossoms. Then we have Will Poulter who I didn’t even realise was in this film. Poulter plays American mountain legend Jim Bridger. Rather than being the standard whiney inexperienced rookie (both in terms of character and actor), Poulter proves himself alongside his towering colleagues and gives a very honest and decent performance. Finally there’s Hawk, Glass’ son played by newcomer Forrest Goodluck. Goodluck has the thankless task of embodying a character disliked by his colleagues, warded closely by his father and then killed off before the halfway mark but in that time he makes a commendable lasting impression.

It’s been something like two decades since Ryuichi Sakamoto has produced a score for a widely released western film and this effort is just spectacular. Teamed with Carsten Nicolai and Bryce Dessner, Sakamoto sculpts haunting and terrifying themes which really capture the essence of what the baron wilderness is. Which one would think would be wholly gratuitous considering the absolutely masterful and breath-taking cinematography capturing precisely that. Lubezki builds on the lush forest imagery he managed to capture in The New World and achieves so much in two and a half hours. If you asked me who the greatest living cinematographer was, I would reply Roger Deakins before you could finish speaking but looking back over Lubezki’s already amazing career, I’m now given pause for thought. The camera moves almost impossibly through the scene, regardless of character path or topographical obstruction and the images that are captured are simply astounding. Shot on a 6.5k camera utilising only natural lighting, The Revenant has a very unique and ethereal visual quality, which is only heightened when paired with the wondrous aforementioned score.

**Another spoiler in the middle of this paragraph**
As a critic, I have to distance myself from being marvelled and at least acknowledge the broad appeal and frankly The Revenant lacks that. Abrasive in nature, this film openly spurns the mainstream masses with its Malick-esque pacing, exceptionally bloody and frank treatment of both violence and basic survival and its minimalist treatment of dialogue and exposition. Does this mean it’s a bad film? Not at all, it just might not be a popular one. Furthermore, I will admit that just after the two hour mark, audience fatigue briefly seemed to set in. Having been pushed so much and witnessed the mounting ordeal to that point, people waned a touch when it came to yet another horrific encounter with man or nature. But this quickly passed. There’s also the fairly neglected subplot about the Arikara Native Americans and their search for the Chief’s daughter, Powaqa. It’s later revealed that the French trappers who had previously been assisting the Arikara had actually been the culprits responsible and while this was moderately-well revealed it still meant that we were treated to four or five cutaways of Chief Elk Dog saying, “We must find Powaqa” which eventually felt rather obligatory and forced. I could also argue that without the central performance much of the film’s simple narrative would fall apart but this is a tale of survival, you could say the same of 127 Hours or Cast Away but I think that would be an immense disservice to the film as an exercise in straightforward story-telling.

All-in-all a fantastic cinematic achievement and a testament to the dedication and commitment to the acting craft. Technically brilliant, artistically bold but admittedly narratively plain.

The Scene To Look Out For:
There are so many standout moments but two in particular stayed with me long after the film. The first and most obvious is the bear attack itself. It’s savage and unrelenting but has a distinct air of realism to it as the bear keeps retreating to check on its cubs. The CGI and practical performances blend wonderfully and the camera placement ensures you can’t escape the gruesome nature of this attack. Secondly, highlighting the more subtle side of DiCaprio’s performance and the overwhelming presence of the score, Glass is lying by the freezing lakeside when he hears something over the ridge. Scaling the trench he witnesses wildly stampeding bison and watches as one is taken down by a pack of wolves. Very simple but extremely powerful.

Notable Characters:
I worry about Leonardo DiCaprio. I think the man is an absolute marvel who rarely puts a foot wrong but in his quest to immerse himself in a role (some would say his quest for an Oscar) he’s going to get himself killed one day. The things he does for this film walk that fine line between phenomenal and fucking stupid. The man is a vegetarian but chowed down on raw bison liver, he subjected himself to temperatures that killed his character in Titanic and put himself through a literal hell for the sake of celluloid. The finished film and we as audience members benefit infinitely from this and his performance is undeniably captivating but just give him an Oscar before he acts his way into an early grave.

Highlighted Quote:
“Turns out God, he’s a squirrel. Big ol’ juicy one … I shot and ate that son-bitch”

In A Few Words:
“Beautiful filmmaking combined with an excellent central performance to produce a truly gripping, gritty, gruesome release”