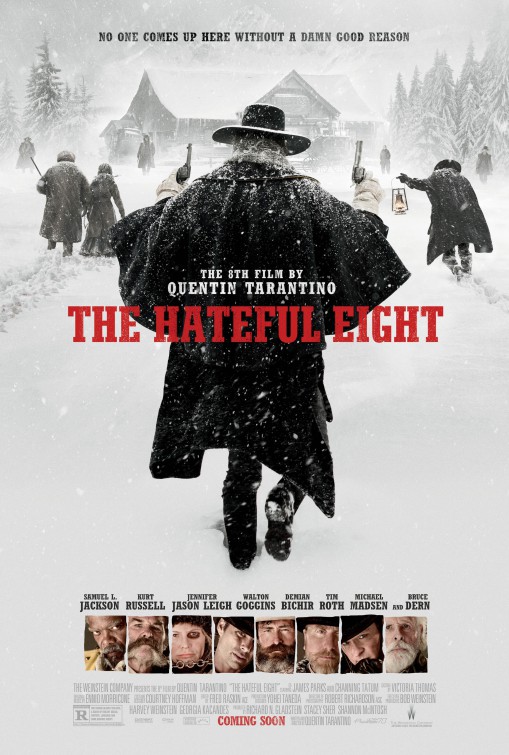 No One To Trust, Everyone To Hate

In 2004 Tarantino wrote, “If you’re gonna compare a Hanzo sword, you compare it to every other sword ever made that wasn’t made by Hattori Hanzo.” In my opinion, to analyse the body of work by Quentin Tarantino, one must do the exact opposite. You can only compare a Tarantino film to a Tarantino film, specifically because they are amalgams of so much inspirational source material that they exist in their own universe, where different laws of physics and narrative structure apply. Anyone who imitates him gets shot down and those he imitates are of such a niche, they’re just happy to be thought of. Either that or they’re dead. With this in mind, The Hateful Eight is Tarantino’s sixth best film. By no means a bad film and certainly superior to several things being released of late but overall a step backward for an otherwise powerfully commanding director.

The film opens on a stagecoach racing ahead of an impending blizzard; its cargo is a bounty hunter named John Ruth [Russell] and his prize, Daisy Domergue [Leigh]. They happen across fellow stranded bounty hunter (and former Civil War officer) Major Marquis Warren [Jackson], who has no interest in Domergue and only wants a ride into town to claim his own bounty. En route the group also intercept the youngest son of a notorious Confederate sympathiser, who continued the fight after the war was declared over. This individual, Chris Mannix [Goggins] announces he will be the new sheriff of the town they are riding to and to abandon him will be murder. The group arrive at half-way house Minnie’s Haberdashery to find it sans owners and sporting four individuals similarly resting before continuing on their way: Mexican hired-hand Bob [Bichir], gentleman hangman Oswaldo Mobray [Roth], cowboy Joe Gage [Madsen] and Confederate General Sanford Smithers [Dern]. Immediately suspicious of the newcomers and the owner’s absence, both Ruth and Warren state that one or maybe all of the current individuals could be formulating a plan to spring Daisy and that until the storm passes they had best keep one eye open at all times.

First thing to note is that for a whodunit, it’s not especially clever. In truth, Tarantino’s plots aren’t ever particularly clever but they are revealed in a clever and novel way, choosing to unfold developments at a time which will surprise the audience. The unfortunate thing here is that the reveal isn’t especially pleasing or surprising, meaning the whole film feels somewhat flat and unsatisfactory. Subsequently, I have absolutely no idea how rewatchable this film is. On top of that, from start to finish almost every character treats Daisy as a subhuman creature, no doubt because of her heinous acts. Unfortunately, Tarantino makes a rookie mistake and rather than showing us how spectacularly villainous Miss Domergue is, we’re just told. And to make matters worse, we’re not even told very well as Daisy’s crimes are never explicitly laid out, so the audience are unable to determine whether the bounty on her head is just. Similarly, for all the crimes that are attributed to Tuco in The Good, The Bad & The Ugly, I never felt he deserved the treatment he received from every passing character. Now, one could argue this is intentional, maybe even an homage to Tuco’s lot in life but I doubt it.

As stated above, this is by no means a bad film. The cinematography is beautiful but if I’m honest, his choice to shoot in 70mm is an entirely indulgent one and aside from the opening shots of sprawling vistas, doesn’t really seem to benefit the film other than to make the small haberdashery appear much larger than it actually is. The editing is also skilfully handled, while some may whine that the film drags on in places or feels boring, I would posit that it paces itself decently enough throughout. On top of that, the most obvious commendable point is the high levels of production design, from the costumes to the props and sets, everything is rich with detail. Despite my issues with the plotting and lack of character development, the acting is enthralling – even if certain characters are neglected. Then there’s Ennio Morricone’s score. One of Tarantino’s steadfast gripes is that to surrender a film to a composer is to allow them to shape how the audience experiences your film, hence his use of songs rather than a heavy original score. Having said that, the man clearly loves Morricone’s work (what’s not to love) and The Hateful Eight stands out from its cinematic siblings for having a mature yet very distinctive original theme, rather than relying so heavily on aping already existing material. I will also praise Tarantino’s refusal to alter history to avoid shocking audiences (yes, I know he shot Hitler in the face, humour me). As harsh as the language can be, the use of racial slurs is historically accurate and depicts the hostile environment free black men inhabited; one could argue that the nature of the blizzard itself represents these conditions. I also like that nobody is above their station. Should the script conjure a situation which calls for an individual to lose their temper and murder someone, they get murdered. It doesn’t matter how much screen time that actor has enjoyed or if they’re an A-Lister or otherwise.

Frustratingly, every time the man gets close to achieving exceptional cinema he falls back on his beloved grindhouse schlock and we get these bright hideous fonts and random unnecessary narration because that’s how it was done in a highly-stylised version of the art form. Right or wrong, Tarantino’s imitation of seventies gumpf will always hold him back as a filmmaker and while this is an acceptable release it is well below his original and more formative bottle release: Reservoir Dogs.

The Scene To Look Out For:
**spoiler**
For all the hollowness of this film, every now and again the script has something genuine to say. The first point is detailed below in my highlighted quote section. Another is the nature of the Lincoln letter. Early on it is established that Warren is in possession of a letter from former President Abraham Lincoln, wherein he speaks fondly to and about him. This, paired with his officer’s uniform, immediately grants Warren a degree of respect from the common white citizen. It isn’t long before Warren is called out on the authenticity of the letter but rather than defend the plagiarism, he simply chuckles and explains that without it, people wouldn’t give him the time of day. This produces different reactions from different characters and acts as a prominent point about the cheap nature of respect, specifically when it’s assigned by someone for whom you yourself hold respect.

Notable Characters:
I love Kurt Russell. To me, the man is the embodiment of a consummate professional. His range may not be spectacular but he turns up, does his job with extreme verve and holds your attention whenever he’s on screen. Even here, his character displays more depth and hard-edged anti-heroism than the script really affords, making his character largely detestable but also strangely respectable. A man of principle, even if that principle is accompanied by violent and callous outbursts.

Highlighted Quote:
“The man who pulls the lever that breaks your neck will be a dispassionate man. And that dispassion is the very essence of justice; for Justice delivered without dispassion is always in danger of not being justice”

In A Few Words:
“Too weak to love, too good to hate”