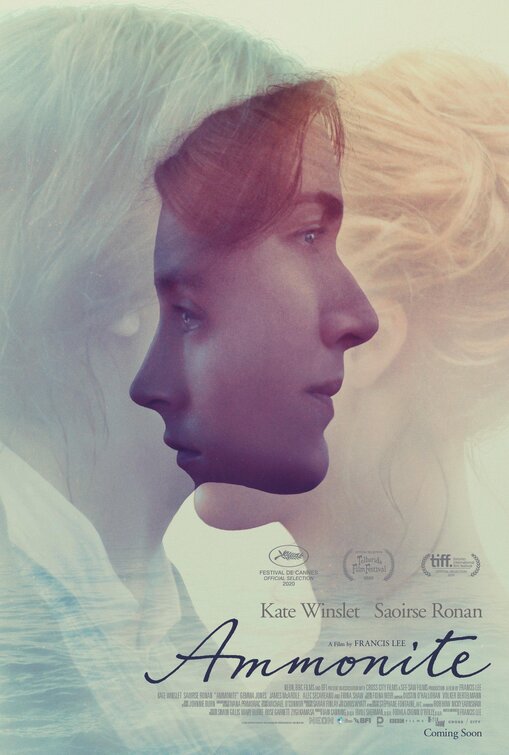 In the early 1800s, Britain saw a rise in independent excavations of fossils. One particularly talented and prolific palaeontologist was Mary Anning [Winslet], who unearthed several important findings which altered how the scientific community assessed prehistoric life. Ammonite is the story of Anning’s later years, her major finds behind her, struggling to makes ends meet by selling paltry common fossils to tourists. The work is hard and the environment unforgiving but the abrasive Anning’s misery and toil is lifted when she is asked to chaperone Charlotte [Ronan] the wife of a rich aspiring geologist. Despite being from different worlds, the two find a kinship through shared strife and a relationship blossoms.

Ammonite is nothing if not magnificently constructed, with Lee continuing his flare for capturing what it actually looks like to live in a place and extends that to an entirely different century with ease. The washed out colours perfectly capture the bleak landscape and unforgiving life of someone so shut out by a hostile society of male academics. On top of this, the absence of a score for the majority of the film heightens both the uncomfortable pauses and the realism of it all.

Both leads respectively bring something fantastic to the screen. Winslet is caustic and short-tempered but it’s a roughness that has been borne out of mistreatment and neglect by her peers. So many lingering pauses and glances that say so very much without having to resort to overt dialogue, allowing her backstory and inner monologue to be pieced together by the audience from the fragments of telling looks and fleeting softness that shines through.

Similarly, Charlotte is introduced with eyes raw from tears an affixed expression of sorrow. With her husband unable to process the depression that comes with the loss of a child, Charlotte is painted as little more than a burden. In this way, there is a quiet isolation to Ronan’s performance; this is represented extremely well by her initial fear of the sea and the abject terror of being wheeled out to it in a wooden shed, only to be confronted then battered about by an angry tide.

But frustratingly, while these two incredible actors offer marvellous performances, they run parallel to each other rather than interweaving. It would be very easy to say this is down to a lack of chemistry and I think there’s definitely some validity to that but I think it’s more that Ammonite is a solid character study but not an especially good love story. There’s an inevitability to the romance, one which is arrived at as a result of formal hesitation, rather than one of passion and desire.

There is a fair amount of talk about the “historical accuracy” of the events portrayed, regarding Mary’s sexuality, but that doesn’t necessarily matter if the story is well portrayed and well acted. My immediate, and admittedly unfair, comparison was with something like Portrait Of A Lady On Fire which performs similarly but with a vastly superior outcome due to its heavier focus on melodrama and transcendent passion. Again, I don’t necessarily think that’s entirely negative, just a different perspective. While Portrait Of A Lady On Fire is bold and exciting and impassioned, Ammonite is repressed, distant yet deeply emotional and ..entirely English.

For so many positive qualities, I would definitely say Ammonite is worth the watch and for the latter scenes where Mary is credited for her findings with something as simple as a sticker over the name of the man who purchased one of her finds, the message resonates.

The Scene To Look Out For:
The scene when Mary and Charlotte excavate their first sizeable fossil together is presented differently from anything else in the film. The score starts to take centre stage, the cuts are quick and the shots largely handheld, it feels altogether different to mark its significance but oddly enough this means it just feels out of place, somehow rushed and given more direct attention than the climactic love scene.

Notable Characters:
All the men are wonderfully pathetic. On the one hand we have Roderick Murchison [James McArdle] with his eloquence and manners but complete lack of empathy and availability for his wife. There’s also Dr Lieberson (played by Alec Secareanu) who is progressive in the sense that he believes the rehabilitative methods prescribed to Charlotte are little more than archaic water torture but still believes a woman’s place is “to care for her fellow sister” and sees Mary as a simple opportunity for marriage than a person.

Highlighted Quote:
“I’m pleased my rock was worth the work”