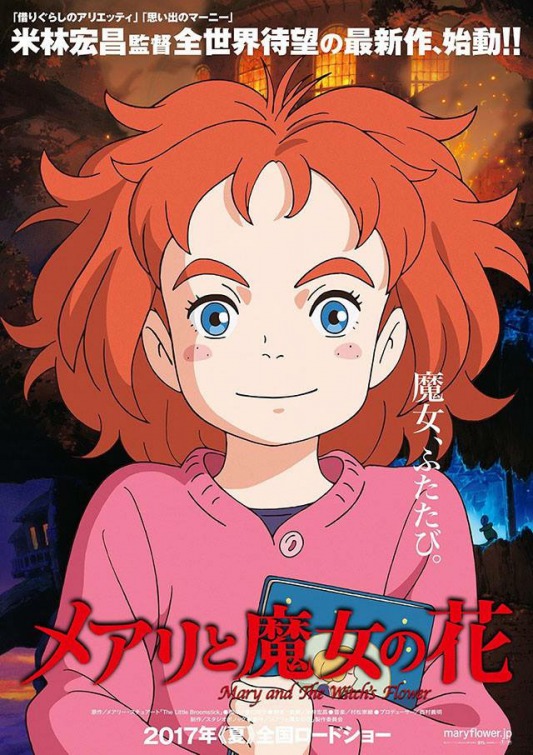 Set in the English countryside, young Mary Smith [Sugisaki] has moved in with her great Aunt Charlotte. Bored by her simple surroundings, Mary finds herself wondering the woods, having followed a pair of cats named Tib and Gib. Deep in the forest she comes across a small blue flower. Back at home she learns that the flower is called “fly by night” and is very rare; she also learns that the two cats belong to a precocious young boy in the village named Peter [Kamiki]. Unbeknownst to Mary, the picking of the flower generates a dense mist and again, she follows the cat into the woods, finding an old broomstick covered in vines. When the bud of the flower bursts in her hand, she absorbs the fluid and is imbued with magical powers and immediately transported to the fantastical Endor College, overseen by Headmistress Madam Mumblechook [Amami] and the outlandish Doctor Dee [Kohinata]. But with the college’s number one rule being “trespassers will be transformed” will she be discovered and suffer the consequences?

Separate from the merits of the film itself, Mary And The Witch’s Flower’s biggest point of note will be the fact it is the first film in Studio Ponoc’s future catalogue. With Ponoc being an offshoot of Studio Ghibli, avoiding any comparison between the two studios is nigh on impossible. I have no doubt that over the coming years Ponoc will forge its own identity but everything from the stylistic design and the music to the animators and chosen story, feels like a Ghibli release; and with so many veteran Ghibli creatives working on this release, the presence of this very recognisable aesthetic is hardly surprising. Having said that, this feature feels similar to Tales From Earthsea, Arrietty and When Marnie Was There in that it’s a very high quality feature but doesn’t feel as good as Ghibli’s upper tier releases. Yet I remain hopeful that standing will improve as soon as they release an original property rather than an adaptation.

Like all hand-drawn animation, in this age of cheap, plasticy computer generated imagery, there is a distinct nostalgia-infused beauty to the visuals. Admittedly, cinema magnifies flaws and quite a few scenes were presented with some rushed or elementary animation but even at its weakest moments, the craft involved feels imbued with more care and attention to detail than most mainstream releases. As with something like Porco Rosso or The Wind Rises, there is a dreamlike quality to the setting, a mixture of reality and expectation. Which isn’t exactly surprising given that producer Yoshiaki Nishimura stated the artists visited rural England for research but were encouraged to draw from what they remembered rather than direct references like photos, that way they would capture the personality and impression of the place. Adding to this dreamlike quality is the fantastic score, by Takatsugu Muramatsu, with its plinky elements and impressive use of a dulcimer to give an otherworldly ambience. Equally, the sound design is wonderful and immersive, creating atmospheric realm of magic and intrigue.

Before I get on to discussing the performances, I should highlight that I will be expressly referring to the original language recording. Having only sampled the dub version, it sounds over-boiled and grating, so I can only imagine it had a detrimental impact. In terms of delivery, personality and character, there isn’t a single weak component present; each main character is eccentric enough to be recognisable without slipping into over-the-top absurdity. And yet, in its simplicity, there is a slight hollowness to Mary and her adventure. Specifically that she doesn’t seem to have changed much at all; so much so that the final shot of the film could quite easily have been dubbed with a triumphant, “I learned.. NOTHING! Yay!” It’s not that Mary is a bad character, she merely lacks fleshing out in terms of consequence and proactivity. In fact, I would go further and say the films lacks dimensionality all over but I think that may be more the fault of the source material than this particular interpretation. On top of that, it would be easy enough to draw a comparison between Mary And The Witch’s Flower and something like Alice In Wonderland – a similarly dreamlike fantasy that doesn’t explore the lasting fallout of its bizarre adventure.

Aside from the main character, the supports hint at an interesting universe but only scratch the surface. In the most obvious example, Endor College is really only gleaned but additionally, there are so many random subplots that are alluded to but go nowhere. The film opens on a pending funeral for the town’s mayor. There doesn’t seem to be any significance or connection to the story and other than a line or two of dialogue and someone dressed in black, it bears no relevance to the story. We also have a lot of fog surrounding Peter’s mother. He seems highly motivated to return home to take care of her, even saying he would want magical powers and to grow older in order to take care of her but, again, no explanation as to why. There’s also the functionality of the school during and after the oversight of Doctor Dee and Madam Mumblechook, we see there are other teachers but anything peripheral to Mary’s actions are non-existent, to the degree that if I was to discover the other pupils at the school were an illusion, it would be entirely plausible.

While it may not be the most engaging or praiseworthy example of an animated adventure, it succeeds where other huge family targeted blockbusters fail. We are given a passionate female lead, the story never talks down to children, there are zero burp or fart jokes that feel the need to crop up for a cheap laugh and the narrative is clear and easy to follow. All in all, Mary And The Witch’s Flower is a perfectly commendable release but like a lot of things released in early 2018, with the talent involved, they were capable of much more.

The Scene To Look Out For:
**spoilers**
In one scene, we experience a semblance of humanising for the villains and suddenly the antagonist themes fell into doubt. As the story progresses, we learn that the flower that Mary discovered was stolen from the college decades ago and both Doctor Dee and Madam Mumblechook have been experimenting on animals. Obviously this is typical bad guy stuff and we immediately want to see them bested. But when it comes to experimenting on humans, we learn that their end goal is to further magical studies and gift everyone with magical powers. Suddenly their motives are seemingly quite noble, trying to establish a state of equality. I appreciate the methods are questionable but it’s a curious turn. Equally, in other fictional representations, magic is usually depicted as a natural source of power and one in harmony with nature. While there are elements of that present here, there seems to be a distinct presence of balance and the idea that the expansion (or abuse) of magic being in direct violation with nature – a theme usually reserved for the advancement of technology and industry over rustic living.

Notable Characters:
The first faculty member that Mary encounters is an anthropomorphic fox named Flanagan (voiced by Jiro Sato) who used to teach broomstick flying but is currently in charge of the grounds. Flanagan is as one dimensional as a lot of the story and other characters but remains a comic relief and welcome personality all the same; even if he was a bit of an oblivious, constantly occurring ex machina.

Highlighted Quote:
“You never know what kids are up to”

In A Few Words:
“A delightfully presented if simplistic fantasy story” 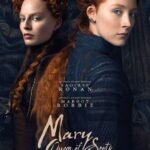 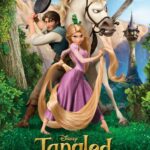 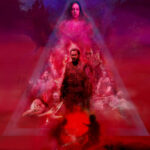