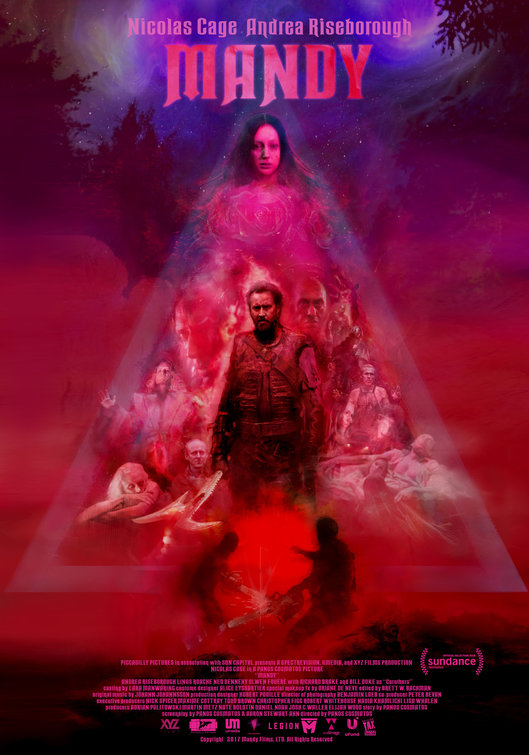 Red [Cage] and Mandy [Riseborough] are a couple living in the Californian Shadow Mountains. An artist and a lumberjack, they lead a quiet and simple life with little to no contact with others. While out walking Mandy is seen by cult leader Jeremiah Sand [Roache] as his van drives by her and he becomes fascinated by her. Inconsolable, he orders his followers to contact a sadomasochistic biker gang named the Black Skulls and retrieve her for him. The cult and the gang enter Red and Mandy’s home and this results in a long, painful and violent quest of revenge for Red.

At its core, Mandy is an extravagant and extremely well-constructed but wholly unironic, earnest grindhouse release. Unlike the standard fare, this is a schlocky film that is assembled and shot with keen precision and vision, following a Mad Max formula and pacing, starting with a long, drawn-out establishment before ramping up to a manic bloody tale of vengeance. But for all its late seventies wild-eyed mania, Mad Max is very much an approachable narrative that a mainstream audience could get behind. Mandy goes out of its way to be the opposite, it knows what it wants to be and the kind of audience it will attract and directs itself, full throttle, to that niche group. As an effect of this, Mandy is a very unique release, unabashed with only limited sources for comparison. Case in point, the animated almost chaptered segments, reminded me of Southland Tales whereas the LSD revenge trip felt eerily reminiscent of Only God Forgives and the rich, vibrancy of the visuals and intentional disorientation of the narrative gives a Suspiria vibe. Yet it doesn’t really feel like any of the films I’ve just listed.

From a technical standpoint, there is a lot that is masterfully done but, again, with that very exclusionary attitude. The cinematography is a thing of hideous beauty, with its mix of deep, rich saturation and excessively grainy shots as well as clearly lit moments that feel separate from the bulk of the dreamlike state. This is mirrored by the aural pairing of Johann Johannsson’s guttural score and the animalistic sound design (especially with the “black skulls”) giving a subhuman demonesque tone to the whole nightmarish ordeal. Finally, the production design takes the setting of the early 80s and runs with it to a degree of fantasy and otherworldliness that explains to the audience that certain very realistic elements are taking place outside of the realms of normality as we understand them. As mentioned earlier, this is a very competent and well-made grindhouse release and usually with this type of release one of the three key points is extremely budget or ineffective but all three are working in such unified harmony that it makes the film a technical marvel; but these are the aspects to a film that most people initially absorb or appreciate, they are things that ferment and linger with time.

Which brings us to the immediate, kneejerk observations – specifically the acting. Linus Roache is a great embodiment of the Charles Manson-esque cult leader, an unhinged but enigmatic individual with delusions of grandeur. It would be all too easy to veer into the absurd but Jeremiah is a terrifyingly grounded and insecure individual who wields an uncomfortable amount of power and influence. On top of that, as eccentric as he is, it is a very difficult challenge to go up against the eccentricities of someone like Nicolas Cage and not appear like you’re competing too much or underperforming but Roache strikes a happy medium. Then there’s Riseborough whose portrayal as Mandy is deep and nuanced, giving her a haunting, almost ethereal quality. Throughout the whole film there is a feeling that there’s something unusual about her, something different, which is purposefully designed to allow the audience to see a glimpse of what Jeremiah sees in her.

But the real point of discussion will be Nicolas Cage himself. In truth, without him, I don’t feel Mandy would have gained half of the momentum and praise it has garnered. Many will talk about the performance being quintessential Cage, the wide-eyed, untamed, screaming energy that people have come to either love or hate. In truth, I think it’s actually a much more restrained and layered performance than some may be expecting; if we take something like his role in Face/Off, the levels of manic zeal are far more wild and reeling but the difference here is that every aspect of this movie is operating on the same level, allowing Cage to merely inhabit the world without his style feeling out of place. As an interesting comparison, Nicolas Cage recently appeared in the generic Season Of The Witch, a fairly big-budget medieval story with high-fantasy elements but while that movie couldn’t utilise Cage’s talents to the degree it wanted, here we have a similar medieval fable that exists in such a heightened reality that it can be told effectively. So we have all the fairytale story beats without the familiar surroundings: the wronged knight who ventures out, killing orcs then reaching a tower, consulting a wizard with a magical animal, descending into a dungeon or cave and killing the dragon inside. Even the cross above the altar in the cultist’s church is presented with a sword in the stone aesthetic.

Ultimately I had a very difficult time deciding on how to rate this movie. It has to be acknowledged that without Cage, this film wouldn’t have the platform or prominence that it received but are we then in danger of simply assigning merit based on name, a case of hype breeding acceptance. I personally really enjoyed this film but is it necessarily good? On more than one occasion it roams wildly into the ridiculous without care or apology, often delving into (possibly) accidental comedy while brazenly committed to the central vision. I feel this sheer force of will and personality will enthral critics but ostracise audiences. I can tell the sum of this movie’s parts are magnificent but being more indulgent than Beyond The Black Rainbow, is it a good narrative? Is this just an example of style over substance or is the execution such that we accept this as a positive for the very fact that it’s done so well? Hard to say but I would argue that a little less strobing and probably trimming and refining a good twenty minutes of content would have made this an incredibly lean and spectacular release rather than a mix-toned one. Reviewing anything dispassionately and without bias is as good as impossible but I am fairly confident that this is a case of analytical thinking and emotive impressions aligning and assuring me that this film is good, it just happens to be incredibly weird and rejects the concept of being liked or approachable because it’s on a mission and I can’t help but respect that.

The Scene To Look Out For:
As I mentioned earlier, I really enjoyed the animated sequences and segmented titling of the story. In one such hallucinatory experience, Red sees the vision of a radio tower, wherein, he meets with the chemist producing the extremely potent drugs used by both the cult and the gang. This whole scene is peak Mandy. The location is bizarre, there’s a caged tiger, Red says nothing and maintains the same pained expression, the music is pulsing, the dialogue is incoherent and the camera is carving an intense yet mucky image. Yet it works to not only sell us on this underworld but furthers Red’s journey and moves the story along; a key example of the surreal being used in a way that most blockbusters tend to miss.

Notable Characters:
One of the supporting roles is played by Bill Duke; a man named Caruthers who is an old friend of Red’s who has been housing a crossbow named “the reaper.” So little is touched on as to the past these two share but it is clearly an interesting one and Caruthers acts like the last sane face that Red sees before his world descends into genuine madness.

In A Few Words:
“A unique and powerful vision that will immediately divide audiences straight down the middle but a clear work of a powerfully driven director nonetheless” 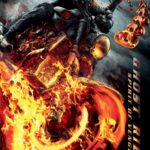