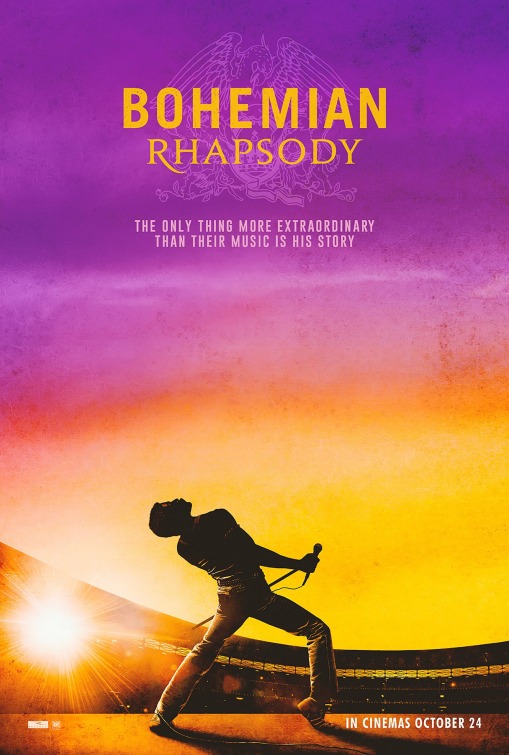 Opening with a hint of the worldwide broadcast of the Live Aid concert in 1985, we quickly flashback to 1970 and are introduced to Farrokh Bulsara [Malek], and follow him as he attends a university gig, meeting fellow student Mary Austin [Boynton] and jumping in as replacement singer for Brian May [Lee] and Roger Taylor’s [Hardy] band. With the addition of bass guitarist John Deacon [Mazzello], Queen is formed. The group gain fame and success but are unruly, continually wanting to change their style and Freddie himself struggles with his excessive lifestyle of alcohol and drugs while coming to terms with his own sexuality.

Despite depicting people’s lives, there is a distinct formula to success and excess. We see the unassuming but talented youth struggling before getting a big break or two, their conflict with those from their life before fame and those during it, the hedonistic lifestyles, the bickering between authoritative figures and the artist and finally a redemption arc before one final performance and a series of photos and title cards detailing the individual’s fate. Like suits of a different cut and colour, they are unique creations but they but still share the same structural components and often present difficulties for creatives to pen something fresh that will appeal to those outside the established fan-base. A bi-product of this is having the accuracy and timeline of events re-worked and manipulated to fit the film’s pacing and structure rather than reflecting reality. There is also the occupational hazard of squeezing in the inception of all the hits, which leads us to arguments or conversations broken up by a musical beat or melody rising over the top before everyone unites to create the song (which is almost never how songs are written). But this is a point of parody that was perfectly lampooned in Walk Hard: The Dewey Cox Story when he is arguing with his wife before the title character stares off and she threatens him by saying “you better not be having an inspirational moment for a new song” to which he replies that he is and the song is then performed.

No matter how well any other aspect of this film works, none of it would succeed without a believable lead and in Malek, we have been given a truly terrific Freddie Mercury. Admittedly, you will never believe this actor is the man, obviously, but as an exercise in mimicry, it’s marvellous. And that goes for the other members in the group as well who are spectacularly spot-on. Although, having seen interviews with the cast outside of the film, it is so very apparent that the costuming, hair and make-up and production design all play a crucial part in the illusion. Iconic looks, performances and moves are recreated magnificently throughout. With the spotlight shining so intensely on centre stage (i.e. Mercury), the supporting roles leave much to be desired but this is another of those aforementioned unavoidable clichés. A great example of this is that of Freddie’s former girlfriend Mary Austin, portrayed by Lucy Boynton. She is an incredibly complex individual with a fantastic interaction where she wants to lash out at Freddie but can’t because she understands his sexuality isn’t his fault and their love is something very different. But in spite of this, she isn’t given much else, merely shuffled in and out of obscurity as-and-when the story requires her. One could argue this is merely telling the story from Mercury’s perspective but it feels more like an undeveloped character.

Another central aspect is the music itself which is presented with enough bombast to create a wholly thrilling experience but as with all musical biopics, this will largely depend on your personal love of the music itself. If you are a fan of the songs, you will love the CGI-charged lip-synching performances and happily welcome the film’s final scene; on the other hand, if you’re not a fan of the band, this could play out like an incredibly painful, never-ending exercise in peacocking. In my opinion, the entire Live Aid section is an exceptionally indulgent but arguably necessary sequence. I feel that it played out the hits people wanted to hear and celebratorily revelled in one of the major peaks of the band’s career. But it also serves to highlight one of the major flaws with this movie which is the overall lack of complexity to the issues that initially drove the band apart, everything is watered down and implied rather than explicitly explored. Admittedly, this will be seen as both a positive and a negative. Some may feel we are only gleaning partial truths, settling for a simplified version but others will see it as a jubilant honouring of the group’s heyday. What has been left out (things that would probably have been included in Sacha Baron Cohen’s version before he departed the project) will frustrate and irritate those already familiar with the story but for those who have a surface level understanding of the history of the band, these elements won’t be nearly as important and won’t be overly missed. But more than that, the legacy is never challenged, giving us a rather sterile analysis of Queen and what made them a success in the first place.

But in truth, all of this is probably quite irrelevant. The movie explores the release of Bohemian Rhapsody with on-screen quotes denouncing the song as a mediocre mess. The irony being it is one of the most well-known and anthemic songs of the last century and the band left EMI because of it and were vilified by the court of public opinion. Much like its namesake, this iteration of Bohemian Rhapsody will no doubt rise above the critical analyses solely because it gave the people what most of them wanted: an unchallenging, nostalgic romp chock full of great songs.

The Scene To Look Out For:
As a supporting role, Tom Hollander’s appearance as the band’s lawyer-cum-manager, Jim Beach, is a surprisingly sweet one. His involvement and impact on the story is limited but he acts as a supportive voice of reason who genuinely seems to have the band’s best interests at heart.

Notable Characters:
Before Freddie announces his solo contract, the band are discussing the reaction to the music video for “I Want To Break Free” in the US, specifically that the press’ assumption that it was all Mercury’s idea, despite the fact that John Deacon wrote the song and the cross-dressing concept was instigated by Roger Taylor. This fight is reasonably filmed but escalates a little quickly and cleanly (another example of conflating several conversations and encounters into one bust-up) but highlights that Freddie’s grandiose personality not only took the spotlight but also acted as the band’s bulletproof vest.

In A Few Words:
“In trying to be a celebration of the band and its greatest hits, it succeeds, despite the glaring flaws”