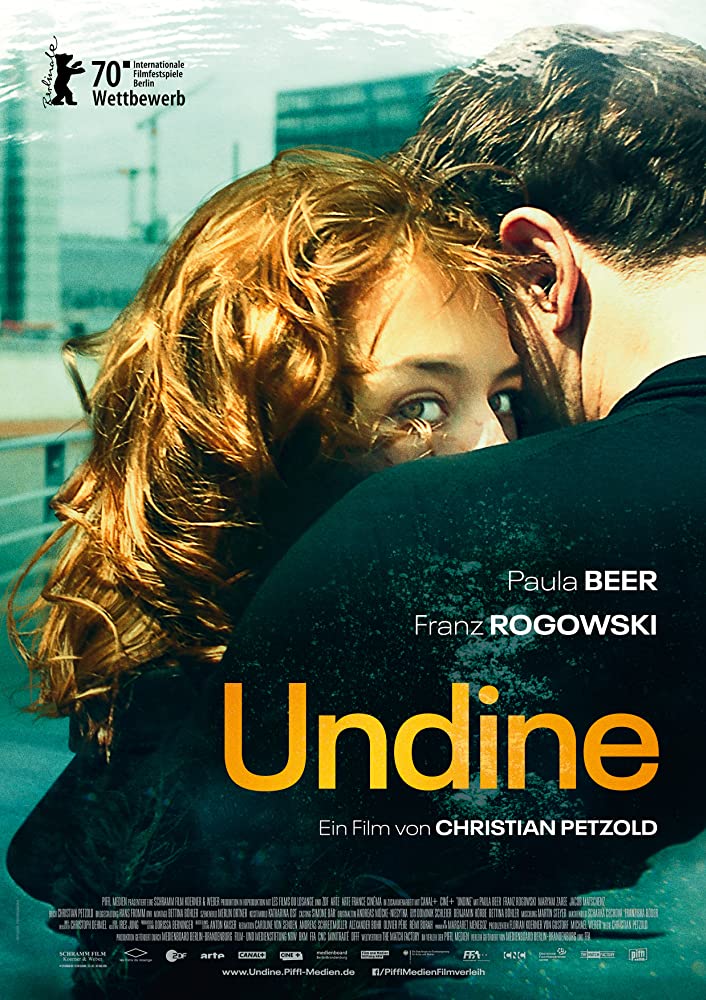 The film opens with an introduction to Berlin historian Undine [Beer] as her boyfriend Johannes [Matschenz] is breaking up with her. Despite this, she rushes to work and gives a talk on the history of the city’s urban development for international groups at the Senatsverwaltung für Stadtentwicklung und Wohnen. Rushing back to the cafe to talk with her ex-partner, Undine is followed by Christoph [Rogowski], one of the group who politely commends her talk and asks her out but awkwardly stumbles shattering a fish-tank. Undine pulls the young man to safety and the two embark on a relationship together. As the narrative progresses, Christoph takes Undine on a dive to show her his work in the Rhineland, only for the film to veer into the obscure.

As a contemporary reimagining of Friedrich de la Motte Fouqué’s fairy tale novella, there is something of a battle for prominence between romance and fantasy. What starts off as a very unambiguous romantic drama, takes a diversion to the subtly supernatural and leads the audience down a path they didn’t realise they were on. Punctuated with stunningly shot underwater scenes and captivating, almost dreamlike qualities, there is a disconnect between the leads and the rest of the world, ensuring your focus fixates on them. This, of course, would be impossible if the performances were in any way lacking.

A fair portion of the runtime is devoted to lectures on the development of Berlin pre and post reunification and what should be monumentally dull and dry material is given life by Beer. Not only that, she draws a quiet intensity to the character of Undine that makes the still moments natural and the eerie moments somewhat unsettling. Furthermore, the deeper we dive into Undine as a person, the more we see how disconnected she is from the world, living in temporary lodgings, holding a freelance position as a historian and how few people seem to know her at all; more than that, her only connection seems to be these two men and a boss who is largely indifferent to her existence.

Then we have the two men in Undine’s life. The caddish Johannes, a confident and self-serving man of wealth and success who never seems to express any real emotion to Undine outside of his base drives. And the rustic and courteous Christoph who is simply overflowing with emotion and tenderness while being a very grounded and thoughtful soul. These diametrically opposed suitors represent – at least on a very simplistic fairy tale level – the standard male archetypes with the stark contrast between confrontations with Johannes in the city and the quiet with Christoph in the countryside.. The bounder and the gentleman. And both are performed compellingly by Matschenz and Rogowski respectively.

To my mind, this is a perfectly structured release replete with plenty of symmetry and repetition. Distinctly turning at the start of the third act, the supernatural element manifests ever so faintly, almost as if not to spook the audience, and suddenly all the foreshadowing of whispered voices, the broken diver statue and the averted drowning scene take on an entirely different meaning. All the while aided by the sombre, ethereal tones of Bach over an original score. In this way, the film remains overtly unpredictable.

But it’s not perfect. Personally, as much as I love the use of water in several forms to highlight her true nature as a water spirit, I would have preferred if Petzold leaned further into the fey aspect, giving us something akin to Under The Skin because as it currently stands, a fair amount goes unexplained – especially if you’re unfamiliar with the source material – and these unanswered questions may frustrate audiences.

Having said that, I feel it’s ultimately part of the story’s charm. A question of how well we know those in our lives and the lingering effects of the people we meet; a literal haunting. In that sense, Undine excels.

The Scene To Look Out For:
Watching this movie, I was struck by the question, “What makes a film compelling?” It’s extremely difficult to quantify but talent is undeniably apparent most notably when nothing is happening. The film opens on a wonderful contemplative stillness. As viewers we are patiently waiting for the prologue to end but it keeps going, merging into a surprisingly compelling guide to the architectural history and planning of Berlin. Yet all the while, in the back of your mind, you’re waiting for something – something catastrophic like a breakdown or some simple time jump to take us out of this moment and transition to another scene. Yet it continues unabated. It’s only when looking down on the city model that she sees the exact spot she was sat at and we are confronted with the very image in Undine’s head that she has tried to push to the background. It’s fantastic

Notable Characters:
**fairly mild spoilers**
At the exact halfway point, Undine sees Johannes again. In an example of that aforementioned repetition, we watch her walk away from the cafe, give the exact same talk and then return to her conversation. The film replays a lot of the same shot formation as the opening act, only this time free from the apprehension she was previously racked with. Following her conversation, we are treated to another long unknowable stare and a certain power to her smiling slightly then confidently walking away. For me this is the reason Beer commands this entire film.

Highlighted Quote:
“If you leave me, I’ll have to kill you. You know that”

In A Few Words:
“An altogether thoughtful and spellbinding tale”