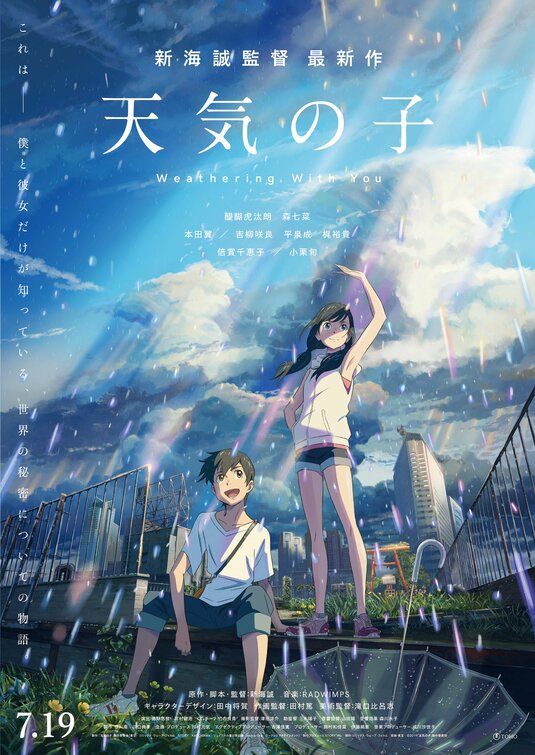 The film opens with a prologue introducing us to Hina Amano [Mori], a young student whose mother is at death’s door. On a rainy day she notices a single crepuscular ray shining down on a shrine atop a rundown Tokyo building. Making her way to the shrine, she prays and steps through the gate, finding herself in a land of the clouds, surrounded by rain droplets in the shape of fish and clouds that resemble dragons. We are then introduced to sixteen year old Hodaka Morishima [Daigo] who has run away from his home to start a new life in Tokyo. On the ferry over, he encounters a freak storm and almost goes overboard but is saved by a suave quasi-antihero named Suga [Oguri]. Being a minor, Hodaka encounters a lot of difficulty getting his Tokyo life started but eventually seeks out Suga, who he learns runs a trashy conspiracy theory magazine. Suga hires the teen and sends him out to research a young woman who can supposedly control the weather dubbed the sunshine girl.

Despite the aforementioned synopsis, the folktale fantasy element is largely subdued, aside from a few bookended developments. The majority of the story presents some fairly adult themes, almost akin to something Isao Takahata would produce.. at least on the surface. Rather than just a kid’s story, this film covers all manner of things from opportunistic adults praying on young women, the bureaucratic nature of social services that are unsympathetic to the human element of each case, the responsibilities thrust upon young adults and indeed adults themselves and, of all things, the rise in Japanese gun crime. Subsequently, it feels like two films are desperately at odds with one another and both suffer slightly for it.

One thing that is absolutely flawless, however, is the technical achievements on display. As with Shinkai’s previous film, Your Name, Weathering With You is visually stunning with an incredible level of animation detail that is truly evocative of contemporary Tokyo. This is partly aided by the real-world product placement and accurate shop fronts/landmarks, to the degree that they may have created the best Big Mac ever constructed. The sound design is also fantastic, from the hum of the city to the ethereal wails of the cloud-based creatures. As far as the score goes, it can be broken down into three simple forms; it takes on a digitised (sometimes reversed) quality during moments of peak stress, soaring strings when joyous and light melancholy solo piano work when sombre or sincere. This is of course very reminiscent of radwimps’ work on Your Name and in truth, is very much in keeping with anime scores of the last decade but still very pleasing throughout.

**spoilers at the culmination of this paragraph**
The entire focus on weather is a curious one. Being British, I’m obviously able to relate to frustrations with the weather but one would assume a film about endless uncharacteristic rain would have quite a strong message about climate change but the biggest surprise Weathering With You has to offer is that it almost doesn’t. For the most part, the film looks back at old-held traditions and the inexorable ebb and flow of nature. More specifically it states that human sacrifice has kept nature in check but in the face of human happiness, why should we suffer – which is kind of a climate change denier’s fantasy narrative. Yet the film delves deeper than mere implication, it takes confident strides into baffling territory with its conclusion. Hodaka manages to save Hina from the ethereal cumulonimbus world that all sacrificed weather maidens go to and faces the consequences of his actions (for the most part and entirely off-screen). We then learn that Tokyo has become completely submerged due to the constant year-round rain, which is an incredibly bold move, but rather than challenging the audience with this flooded dystopia, the movie settles for an upbeat romantic close with a sort of “fuck it, we can’t change the inevitable” tone that didn’t really gel. This, for me, was the weakest element. No strong moral conviction, no satisfactory resolution and no emotional gut-punch; what should have been a tremendous storm of change and defiance in the teenage heart and soul peters out to little more than a light drizzle.

Ultimately, apart from the animation, everything seems just out of reach. The danger is never truly felt, the fantasy world-building often comes off as Ghibli-lite and I didn’t feel the – for lack of a better word – painful longing for our leads to come together. It’s not that Weathering With You is a bad story, it’s just not a particularly strong one considering how easily a few slight alternations could have transformed it into another animated classic of the 2010s, as Shinkai’s last feature is. But as much as this movie stumbles, it is still performing well above the average animated release, as well as a great many live-action narratives aimed at teens, and that should always be commended.

The Scene To Look Out For:
Given his first assignment, Hodaka has to meet several potential sunshine girls. This montage segment is where the film starts to pick-up speed and we get more of a playful side than the fairly despondent, dour tone of a down-on-his-luck adolescent runaway.

Notable Characters:
Hodaka is a bit of an oddity. Daigo does a marvellous job with the role but we know so little about this man. We never learn what the home life he was so desperate to escape was like, other than it was apparently a bit dull. He is reckless and impetuous, as most teenagers are, but everything seemingly works out in his favour to the degree that even discharging a weapon at a (presumably) yakuza club owner is met with little lasting consequence. I understand the notion of the blank slate shonen that audiences can project themselves onto but this is a prime example of an element that could have benefited from just a little more nurturing and development.

Highlighted Quote:
“The weather changes on a whim, regardless of human needs”

In A Few Words:
“Technically marvellous but narratively lacking”