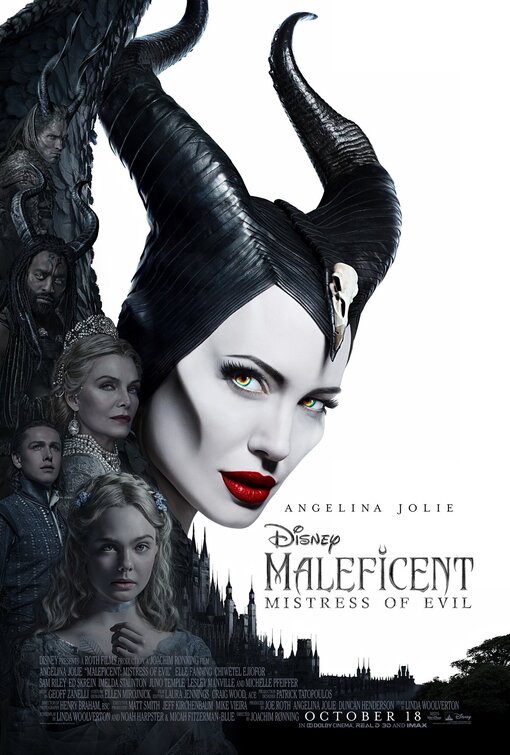 The Truth Will Come Out

Set several years after the events of Maleficent, the events of the spinning wheel and Princess Aurora [Fanning] have quickly turned to gossip and legend with Maleficent [Jolie] positioned as feared villain once again. Because of this, relations between the human world and the kingdom of the fairies known as the Moors are fraught, with raids and deaths on both sides. Meanwhile, the young Prince Phillip proposes to Aurora and the disapproving Maleficent must visit his family’s kingdom of Ulstead, where the townsfolk’s exclamations and quaking guards illustrate she is far from welcome. During the feast in UIstead castle, the conversation becomes heated and the King falls ill, supposedly cursed. Queen Ingrith [Pfeiffer] accuses her guests and Maleficent escapes without Aurora, who seemingly cannot trust her godmother. However, while fleeing, Maleficent is struck with an iron pellet and is washed out to sea, where she is rescued by a man bearing similar horns and wings.

Despite lukewarm critical reception, Maleficent went on to earn an incredibly vast sum of money and immediately won audiences over. Subsequently, there doesn’t appear to have been any notetaking or points to improve on and the majority of the problems, frustrations and flaws of the first film are still present in this sequel. The tone rapidly shifts from incredibly dark to irksome slapstickery, the acting is largely hammy and over the top and the plot is incredibly straightforward and formulaic. Sticking with that final point for a moment, the story is painfully transparent from the start. With the first outing being a reimagining of a familiar fairy tale, it at least attempted to hide its conclusion – albeit fairly predictably – Mistress Of Evil, on the other hand, is completely devoid of mystery and makes little effort to mask character alignment and the plot’s trajectory. One could argue this is perfectly acceptable for a film based on a fairy tale but as this iteration has purposefully set out to subvert expectations of tropes and archetypes, it feels remarkably lazy.

There is also the divide in quality between the practical and digital. On the one hand, the production design is absolutely spectacular, the sets and costumes are layered with such incredible detail. In truth, I would go further than that, I would go so far as to claim that everything physically crafted for use on-screen is the strongest thing about this entire film. But such high calibre production only serves to juxtapose against the plasticy artificial CGI that was used for similar projects such as The Nutcracker And The Four Realms and Oz The Great And Powerful. For every positive real-world element, there is a bland CGI counterpart. It’s not that the digital effects are poorly crafted to the degree that they do not function, it is more the inability for anything to feel remotely photorealistic or believable. Another prime example was Jack The Giant Slayer which had very ugly CGI that looked immediately dated, despite a big budget behind it. It didn’t help, of course, that the general cinematography faltered. There were a handful of scenes with extremely strong piercing crepuscular rays and haze-covered sets to accentuate this but the majority of the movie felt either too dark and difficult to follow or overexposed (not in the literal/technical sense), highlighting the limitations of the visual effects.

Once again, Angelina Jolie continues her very commanding performance. Not only does she clearly enjoy the part she’s playing but the control, presence and quiet mirth she brings to the character are frankly striking, to the degree that she leaves everyone behind and dominates the entire feature. The only individual who comes remotely close is Michelle Pfeiffer, who plays the sneering, moustache-twirling villain credibly and competently but the character as written on the page is incredibly one-dimensional and gives very little room for her to bring much else to the role. I also felt the inclusion of Warwick Davis was a nice touch and he does well with what he is given. Part of the story introduces us to the other living dark fey and while their introductory scene is quite interesting, showing off a range of diverse actors and subtle alterations in make-up, none of them really stood out or brought much to the proceedings; which, considering some of the individuals cast, was a massive waste.

In the same way 2014’s Maleficent utilises subtext and layering ranging from preconceptions and rape, this instalment injects an amount of similar themes surrounding prejudice, motherhood, manipulation and controlling people through state-circulated mass lies. But regrettably, as much as these elements are present, they feel too much like a reset from the close of the first film for the sole purpose of generating conflict in a continuation. It also doesn’t help that this reset gives audience a lot of mixed messages. It would seem the intended focus is primarily for younger audiences but while the film actively states Maleficent is neither scary nor malicious, we often only see her being just that, which is likely quite confusing for said demographic (not to mention the fact that subtitle of this movie is Mistress Of Evil, which is rather misleading). This isn’t to say we can’t portray individuals with nuance just because it’s family film but for the purposes of pushing the narrative forward, Maleficent abandons Aurora with extreme ease before meeting up with her fellow fey. It strikes as a betrayal of established character, going against what we know to be true purely to facilitate a very thin second and third act.

I will give the first film credit for not simply making a straight shot-for-shot live action adaptation of Sleeping Beauty but it most definitely did not warrant a second go around and I would be extremely surprised to see a third instalment – but I imagine that will entirely depend on how Mistress Of Evil performs at the box office.

The Scene To Look Out For:
The seemingly interminable final battle boils down to a series of messy close-ups and superfluous single-word commands (Withdraw! Attack! Divide! Ignite!) that never really inspires. While the general action is mercifully easy to follow, its execution is acutely inefficient and falls into several banal cinematic pitfalls. Having said that, the culmination with the phoenix visuals – while extremely heavily signposted – were admittedly very impressive and had the desired impact.

Notable Characters:
As much as the script tries, Aurora is given no real agency and remains easily manipulated. This version has never exactly been her story but she bounces around for the majority of the film before offering a glimpse of actual ingenuity and capability in the final act. For the most part, Fanning pushes through this but never escapes the trappings of bland damsel in distress that everyone is fighting so passionately over for some mysterious reason.

Highlighted Quote:
“What’s this? Nobody’s allowed in here but me and I’m already here. Go away!”

In A Few Words:
“Another largely trite jaunt into the fairy tale world of Maleficent, mostly saved by the weight behind the central performance”