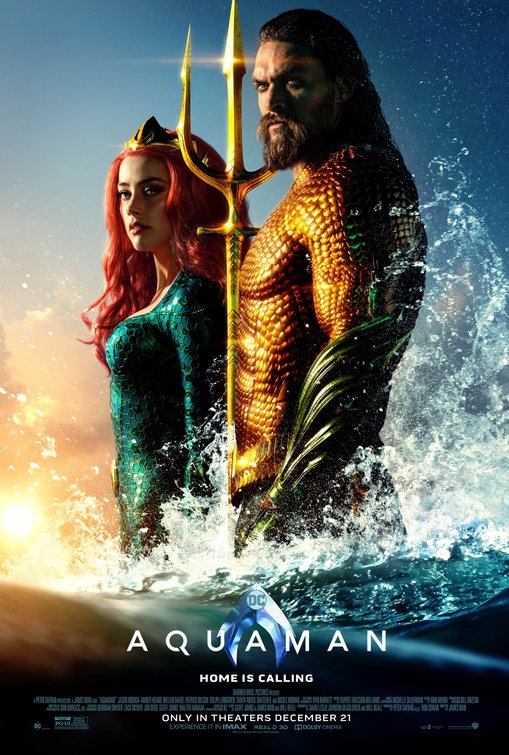 The film opens with a healthy dose of backstory, detailing the origin of Arthur Curry [Momoa], also known as Aquaman. As a son of a lighthouse keeper and the queen of an underwater kingdom, named Atlantis, he has specific powers and abilities. One year after the events in Justice League, Arthur stops a group of pirates hijacking a Russian nuclear submarine. Well, he doesn’t exactly stop them but that’s a whole different review. Soon after King Orm [Wilson] meets with fellow monarch to discuss uniting the ocean for a fight against the surface when they are attacked, cementing the alliance. Meanwhile Princess Mera [Heard], Orm’s fiancée, contacts Arthur and sets him on a quest to discover the ancient Atlantean king’s trident and stop the impending war.

The first thing that is immediately obvious is that this film stands out from the other DCEU films. Each release has had a very distinct directorial vision, which has admittedly led to a bit of a lack of continuity in character portrayal, but Wan unabashedly leaning into the fantasy elements is one of this movie’s strongest spokes. Much like Marvel’s Thor or Guardians Of The Galaxy movies, the unique production design and colour palate not only offers audiences something new but takes a nice step away from the dour, desaturated self-importance of the other features. But coming from a horror background, Wan has limited experience filming direction and this often leads to unfortunate repetition. Case in point, all the major fight sequences suffer from an overuse of a spinning one-shot in a single box location, which breeds familiarity and tedium. The fights themselves are nicely choreographed and well performed, with the CGI largely holding up but it leaves everything feeling a touch uninventive. Having said that, there’s a very strong visual presence at work here, offering up some truly impressive shots. One that stands out (and was used in the trailer, so is hardly a spoiler) is the semi-submerged cross-section as Arthur and Mera dive into the depths of the ocean as a storm rages overhead. Almost everything is pitch black bar the penetrative light from the flare in Arthur’s hand, revealing the swarms of snarling beasts of the trench that are descending upon them. It’s genuinely art; the kind of splash panel one sees in a comic and immediately floors you with its sense of scale and severity of the situation. But regrettably, most of the CGI will age horribly due to the cartoonish lack of realism, veering into full-on video game cut-scene territory. Stepping away from the visuals for a second, the sound design is fantastic, creating an interesting underwater soundscape but the score is an altogether different beast. The music used throughout is a curious mix of the kind of themes set up by Hans Zimmer – riffing guitars and soaring strings – and digital synths, like a mix between Blade Runner and Mass Effect. Being Rupert Gregson-Williams, one of Zimmer’s many protégé’s this is hardly surprising.

From the very get-go it is evident that this movie is incredibly self-aware. They know very little is known about the Aquaman lore, they realise that fish people are a hard sell and they know all too well what this film needs to achieve and its star is. After a fairly large helping of flashback exposition, have the scene aboard the submarine, re-introducing us to the adult Momoa. If you’ve seen the trailer, you’ve no doubt seen this shot. Arthur drops down, facing away from the camera, flicks his hair back before rippling his muscles and sultrily grunting “Permission to come aboard.” And the thing is, it works because in my screening a lady three-or-so rows back was unable to contain herself and let out a disturbingly primal, “Oh.. yes!” Which, if you’ve ever watched a film with a British audience, you will know is pretty unorthodox. But unlike his appearance in Justice League, the bro machismo has been toned down, or somewhat refined at least. The abrasive, obnoxiousness has been traded out for a more subtle confidence and the conflicting motivational drive feels earned rather than simply petulant. As odd as it will sound (and I am fully prepared for blowback on this), it almost feels like Momoa is trying to channel Brandon Lee. For those who don’t know, Lee’s most well-known feature is The Crow, the production that he died on due to an on-set accident. But if we strip away the broody goth nature of that vengeance tale and simply focus on the wise-cracking bravado and arrogance of The Crow’s action scenes, the persona is very similar to how Arthur Curry is portrayed here. Unfortunately, every other character has the fairly daunting task of selling underwater fish people as a serious conceit. Acting as Aquaman’s side kick is Princess Mera, with Amber Heard returning to the role. In all honesty, there’s very little to the character, she has a bit of agency (more so than Arthur who is far from proactive) but her character is rather two dimensional and boils down to essentially the fish-out-of-water tropes – I’m not even going to acknowledge the pun there. The central opposition is King Orm and while I respect Wilson’s dedication to the craft and commitment to the performance, his character is very generic. As the lead’s half-brother, hell bent on conquest with a prejudice to the “surface world” inherited by his father and the knowledge that his mother died because of his half-breed half-brother, he’s pretty standard bad-guy fodder. But amidst the moustache-twirling, posturing and incessant yelling, Wilson manages to salvage a sizeable amount of credibility.

As energetic and fun as the direction is and as over the top and enjoyable as the performances are, the script is a particularly flat component. Sure, the main treasure hunt story is perfectly serviceable and the warlike machinations of the reigning king are somewhat interesting but the dialogue is just abysmal and the story follows a very predictable beat-by-beat formula. A prime example is the love story between Arthur and Mera which is painfully sophomoric in its execution. And yet while the starting point and the final destination are exactly where one would expect, the pleasing morsels along the way make the journey feel oddly worth it.

The Scene To Look Out For:
Far too many recent superhero films stride into a third act conflict with their lead villain opening a portal (preferably blue) above a city and fighting waves of disposable infantry. Aquaman defies expectations by doing things a little differently. When discussing Orm’s motivation, the film a people furious with the pollution of the ocean by mankind. Such an eco-message could come off as campy and a bit Captain Planet but owing to how it is handled and the fact that we are under constant threat from climate change, this works as decent motivation and generates point of sympathy toward the Atlanteans. All of which builds to an all-out Lord Of The Rings style battle which is genuinely quite a stunning sight to behold. Either that or there’s a scene with an octopus playing drums! That’s some Little Mermaid shit right there and this movie has zero qualms including it front-and-centre.

Notable Characters:
I don’t think it would be entirely fair to say that Aquaman suffers from too many villains but a lot of the characters do feel underdeveloped. Black Manta is a tricky one as there is both too much and too little of him. He has his origin in the first act, he squares off against Arthur in the second and reappears mid-credits to set up a sequel but he never really poses much of a threat to Aquaman and feels like a bit of an afterthought whose quest for conflict with Arthur is an unrequited one.

Highlighted Quote:
“A king fights only for his nation. You fight for everyone”