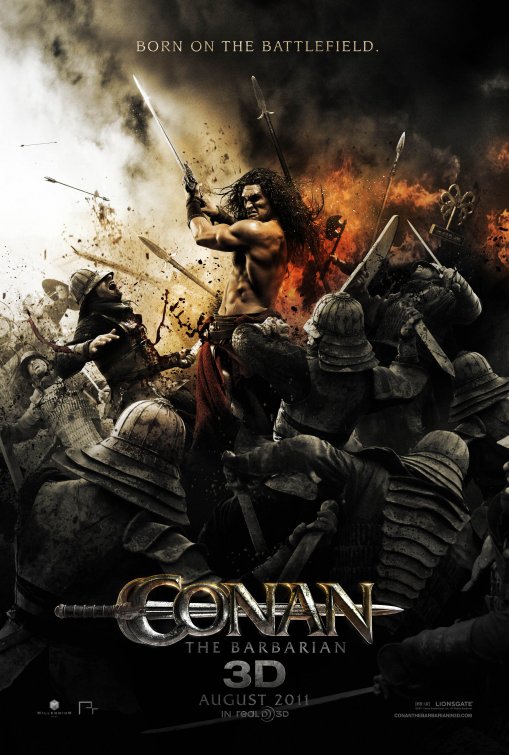 Enter An Age Undreamed Of

Conan’s a hard one to gauge. For all its flaws and disregard for the original R.E. Howard stories, the 1982 Conan The Barbarian is an enjoyable fantasy and one that has a loyal cult following. With this reboot, Howard fans were given a glimpse of hope that an extremely loyal, graphically violent adaptation would be filmed – not dissimilar to HBO’s treatment of Game Of Thrones. Unfortunately, this is far from the case. I left the cinema feeling relatively positive, happy to award this film a middle-of-the-road five out of ten but as the sheer wealth of inadequacies really soaked in, my opinion altered significantly.

Set in the fantasy realm of.. wait, no, it’s an age, right? Whatever, in the Hyborian era/place, a young barbarian is born on a battlefield, through a rushed caesarean. Before dying, his mother names him Conan and his father raises him aloft and cries out, “Myahhhhhh!” Which probably signifies something. Years later, the impetuous Conan displays more grace, skill and talent than other children several years older than him; this is highlighted when the boys are given a task, only to be ambushed midway through (kind of like boy scouts getting mobbed by zombie Nazis). While the others flea, Conan runs head first into battle and dispatches the seasoned warriors before proudly returning their heads to his village. Recognising the child has skill (or just happens to be a vicious nutbag), his father [Perlman] teaches Conan the ways of steel, the only thing their tribe truly worships. Before he can complete his training, the village is ambushed by the warlord, Khalar Zym [Lang], who is searching for the last piece of a mask that will enable him to control the world. Conan and his father are left to die (*spoiler* Conan survives, his dad doesn’t) while Zym rides off with the completed mask. Only it’s not complete. Apparently, it needs the blood of the last surviving heir to some bloodline to activate it. So, the narrative jumps a good ten or fifteen years forward by way of a black screen and Morgan Freeman basically saying “Then Conan did some stuff but we don’t have the time or the budget to show you”. It would seem Conan’s [Momoa] been travelling, looking for those responsible for the death of his people and Zym’s been looking for the ‘pureblood’, neither of whom appear to be doing a good job about it, even though the answers seem obvious: evil guy killed everyone in your village? That’ll be the evil king then. Airy-fairy virgin pureblood? She’ll be at that airy-fairy virgin monastery. Anyway, Conan meets up with pureblood girl [Nichols] and uses her to get to Zym and his crazy half-human half-witch daughter [McGowan].

Despite the flak he will no doubt receive, I thought Jason Momoa did a reasonably decent job of portraying Conan – if only because Conan is a really easy character to portray. Granted, he was better as Khal Drogo and his guttural mumblings were often indecipherable but at least he acted the part. Additionally, Stephen Lang’s venomous performance (Col. Quaritch with different scars) as Zym was pretty on the mark. Everyone else? Campy as hell. An unbearable sea of gurning faces and pointlessly exposed breasts – this coming from the guy who tweeted the live #GameOfThronesBoobCount is saying something. At times the CGI is fairly impressive, largely when dealing with the fantastical back-drops and landscapes, as was the production value on things like sets and costumes. Despite this, the whole thing lacks the truly epic scale it so desperately needs.

But the biggest flaw holding this entire film back is the hideously sloppy editing. I don’t know if Ken Blackwell didn’t know what he was doing or if there was footage missing but it’s genuinely impossible to follow at times. If the shaky-cam, erratic fight sequences aren’t disorientating enough, the action leaps ahead, feeling like you’ve missed a few strikes or shots – God help you if you watch this in 3D. For example, during the ‘Dweller’ scene, some aquatic beastie reaches it’s tentacles through the grated floor and wildly attacks anyone and anything; except Conan. The dude is standing in the centre of the room, seemingly unable to tell what’s going on, just ducking and waving his arms around but not really attacking anything, simply observing the events. Additionally, there’s no real development for any of the characters, nothing driving them bar vengeance and ‘someone told me to’. This isn’t helped by the fact that the entire population are seemingly incapable of expressing anything outside of the terrible terrible terrible one-liners. In the ’82 version, the dialogue was fine but Arnie’s delivery made it hilarious, here it’s absurd and accent or not, it conveys nothing. Finally, there’s the typically horrific, forced score from the typically mercurial Tyler Bates and the abysmally anti-climactic writing; every conflict, every plot thread seemingly goes nowhere. Prime example, the big (what you would presume to be magic-filled) finale, Zym has the completed mask and the blood, about to release unlimited power and all he does is try to summon his dead wife – the mask literally does nothing! There’s a half-arsed fight but that’s it! Painful!

There are worse films and all-in-all, I managed to sit through the entire thing without grumbling too much but ultimately, it’s just a waste and upon discovery that the entire thing was made for around ninety million dollars, my heart sank a little. That’s just depressing.

The Scene To Look Out For:
There are a handful of standout moments that actually surprise you – probably because they are watered-down elements of Howard’s original stories. Whilst interrogating the high priest or head monk or whatever, Zym enquires why they refuse to answer. The monk replies that they value life and so cannot assist a man who would destroy it. Zym calmly explains that the monk is mistaken, that his wife was hunted down and persecuted before he watched her burn to death, someone who truly values life would be incapable of such an act. It’s actually a moment of sole poignancy in a mess of swords and blood, which proves had more of this been injected, we’d have an all together stronger story.

Notable Characters:
Aside from the annoying, easily dispatched lieutenants and the impish friends Conan makes along the way, few annoyed me more than Rachel Nichols as Tamara. As an actress, I find her boring, as a character, I found her role despicably cliché and as a plot device, she was serviceable only as the surprisingly ballsy warrior chick who Conan uses to find Zym. Oh, and the sex scene. God damn I hated that. I really do hate sex scenes on film. People moan about unrealistic action or humorous setups that go too far, well for me, sex scenes are the worst offender. They’re the laziest developments and usually the worst filmed section of the film, primarily because they’re completely ridiculous. Yeah, you heard. Unless you’re making a genuine statement with it, sex scenes are ridiculous – knock it off.

Highlighted Quote:
“I live, I love, I slay and I am content”

In A Few Words:
“An uninspired cross between Game Of Thrones and The Scorpion King let down most by atrocious editing a thoroughly messy script”