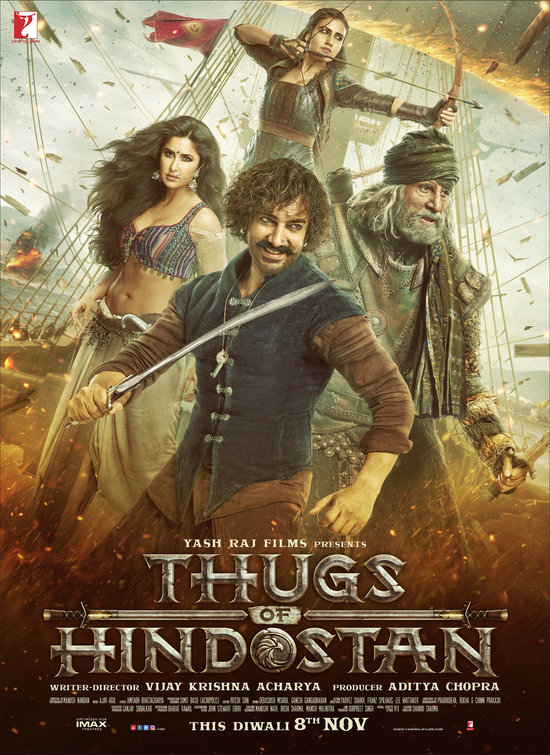 Years after her family were killed by British officer, John Clive [Owen], Princess Zafira Baig [Shaikh] and her loyal general Khudabaksh [Bachchan] roam the high seas, striking at British operations in the hope of one day liberating their country and restoring native rule. Playing both sides is the roguish Firangi Mallah [Khan] who sells out Indian thugs to the British for reward in the hope of one day emigrating to Great Britain. Firangi is charged with delivering Azaad (Khudabaksh’s alias) to Clive in exchange for a handsome reward but despite his cowardice and treachery, Firangi is conflicted by both the cause and Zafira.

I respect Bollywood runtimes. Too many features are cut down to appease contemporary audiences but with all the slow motion and musical numbers, three hours feels like a standard given. Having said that, the intermissions helps no end and I always walk away from these movies feeling the western trend of splitting one long film split into two parts could take note from this format. But I digress. Unlike most Bollywood films, this feels like a real hybrid of both traditional Indian cinema and big budget American films but by inheriting the overall flaws and tropes of both, the outcome is probably not what anyone involved was hoping for and for the most expensive Bollywood film produced to date, there isn’t a great deal to show for it.

One of the main appeals of this release is the opportunity to watch Khan and Bachchan as co-leads for the first time and this highlights one of the movie’s truly shining qualities: the wealth of charm and charisma in the central performances which are strong enough to hold the whole thing together. Khan is delightfully cheeky and clowns wonderfully, giving a performance that commands a great deal of presence but is far from the best performances of his younger years. The exact same can be said for Bachchan who never breaks from his angry-man persona and grumps his way through the film without ever really being challenged as a performer – except for dancing but I’ll come back to that later. But as positive as the male roles are, the female roles leave a great deal to be desired and in truth, Thugs Of Hindostan has chosen the wrong character to make its lead. From the promotional material, one would be forgiven for believing this was a high-seas romp about two male pirates at odds with each other but it should be the story of a princess reclaiming her kingdom. Subsequently, Fatima Sana Shaikh’s role is completely diminished and her conflict with Lloyd Owens character would feel more personal (as is attempted) but in trying to replicate the Pirates Of The Caribbean format, they have committed the same error of making the joker the lead. Suraiyya Jaan (played by Katrina Kaif) is even more underdeveloped as a character. I think Kaif had about three scenes and the last one at the end of the film, wherein she stows away with Firangi to partner up with him – is incredibly dumb and out of place. On the other hand, we have the villainous Lloyd Owen whose sneering hits all the beats one would expect but his goals, motives and hierarchy are never explored; he’s just a dick because he’s a dick. But it’s always masochistically amusing to watch an international period film that serves as a reminder that, to a great deal of the world, British people are oppressors and the source of a great deal of misery. And Owen admittedly delivers the requisite level of condescending arrogant bastardry that audiences need from a bad guy.

If I’m being perfectly honest, this movie is a lot of fun at times and is easily better than the last 2 Pirates Of The Caribbean outings. All the practical scope and scale give a sense of old Hollywood spectacle to the world building and dance sequences, highlighting something that is lost in CGI-dependant releases. Equally, the production design is genuinely fantastic, with an exceptional amount of detail and craft going into the costumes and sets – but in truth, like many blockbusters, the contents will appeal to the untrained eye but with so many vastly superior South Asian films, this initially fun and well-constructed release is far from representative of the quality of its peers. Nowhere is this more apparent than the script, direction and editing; all of which do not have the weight to back up the sizeable budget. A lot of this stems from the simplicity of the story and the fact that so many obstacles are overlooked or side-stepped with minimal effort. Case in point, the thugs are continually accepting of Firangi despite his open treachery, there is a complete lack of suspense or surprise and the whole story unfolds in a painfully obvious and predictable manner. Paired with lazy sound effects – every single shot of Khudabaksh’s eagle has to be accompanied by the exact same copy-and-paste sound effect, executed as if under legal obligation and the general musical themes and motifs are a little unforgettable and repetitive.

When compared to two of the highest grossing films in India, Baahubali: The Beginning and Baahubali 2: The Conclusion, Thugs Of Hindostan lacks the stakes, emotional core, glitz and flare of those fantasy epics. What’s more, it is severely lacking in any form of subtlety or restraint, offering a self-aware irreverent romp that ultimately feels like a wasted opportunity.

The Scene To Look Out For:
As stated, this film should have made Zafira’s story the central focus and with so many other Bollywood films with powerful female roles, this feels like a completely avoidable issue that could have been addressed in the scripting phase; especially because Fatima Sana Shaikh feels largely wasted but when she is given something to do, shines.

Notable Characters:
As an example of everything this film is and could have been, the song/dance sequence in the middle of the film tells the story of the Thugs celebrating in their hideout with a big boozy bash. At times, it’s a feast for the eyes with some great musical moments and impressive dancing. At other times it feels surprisingly uninventive and limited in its execution and direction with Bachchan’s singing unparalleled but his dancing leaving so much to be desired – and I’m not blaming an old man for not being as quick on his feet, I’m blaming the director for making me notice.

Highlighted Quote:
“This wound will heal in a few days but don’t allow the wound inside you to ever heal”

In A Few Words:
“An entertaining and serviceable enough outing but hardly worthy of the calibre of the sum of its parts”