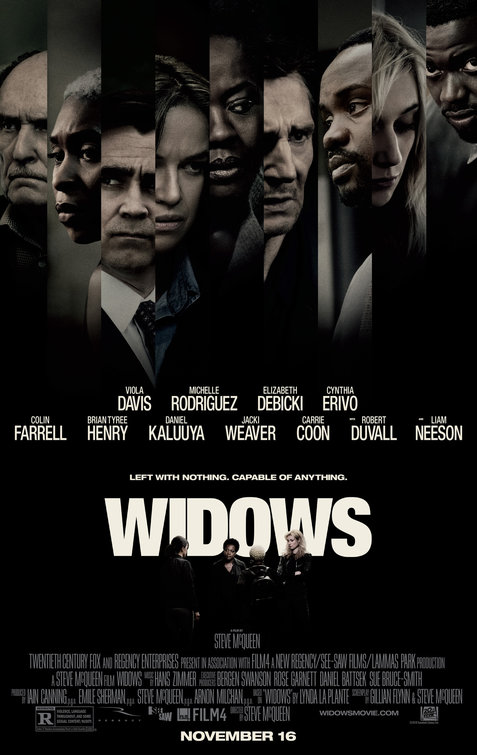 Left With Nothing. Capable Of Anything.

After a heist goes wrong, four criminals are cornered by the police and killed. It later transpires that the man they were robbing was gangster-turned-political-candidate Jamal Manning (played by Brian Tyree Henry). While trying to keep himself semi-distanced from his criminal background, he expects the robber’s widows to repay the debt of two million dollars. Desperate and fearing for her life, Veronica Rawlins [Davis] comes into possession of her late husband’s journal and unites the crew’s partners to pull off his next planned job which would clear the debt and give them enough money to buy them a new life.

On the surface, Widows is a fairly disposable heist film. In truth, on paper, it could quite easily be a Saturday evening mini-series on TV or a straight to DVD feature. The difference here comes down to the brilliant writing, razor-sharp performances and the jaw-dropping direction. It may not sound like much but one of the reasons Christopher Nolan is a great director is that he plays to his strengths and creates films that seem a lot smarter than they are while delivering a digestible story that seduces the audience through flattery. McQueen’s films to date are not that, each feature is prime independent cinema but either the subject matter or the presentation ostracises many. With Widows, McQueen boils down all these creative components and delivers them to an unsuspecting audience who don’t even realise they are watching something that is so incredibly layered. This is where you go from a great director like Nolan to a truly phenomenal one like David Fincher and McQueen has proved himself more than capable of drawing such a comparison. From the amazing long-running tracking one-shots to the subtle directorial nods like the multiple uses of reflections, so many beautiful directorial and cinematographic flourishes have been utilised, injecting elements of high art into a straightforward action crime thriller for the mainstream to comfortably process. Essentially, surreptitiously elevating the audience without them realising. As a little aside, I was rather surprised that Hans Zimmer composed the score. In retrospect it shouldn’t have come as a big surprise as Zimmer also scored 12 Years A Slave and his contemporary signature is all over the music but the score itself is actually quite a restrained and subdued turn for a man we now associate with big, bombastic musical presence. Instead, we have a great and thoroughly tense score that pairs itself magnificently with the pacing.

The entire first act is utilised to really ground this world. With elements of a criminal underworld and corrupt political officials, the stage is set to both highlight how distant these women are from their husband’s work and establish how unpleasant said men are. Granted, this could have been terribly mishandled, really beating audiences about the head with it but this simple glimpse tells us everything we need to know: these men have created a problem and now those who are associated, whether complicit or unaware, are paying the price. But the truth is, the more you tug on these threads and look for character patterns, the sheer complexity of the writing comes to the fore. This is a film about generational differences, legacies, separation from mistakes of the past, betrayal, loyalty, background, commonalities and the nature of alliances. But on the surface, this is a celebration of endurance and willpower; forced through circumstance to take action and refusing to be pigeon-holed, written off or walked over, the performances reflect the same unfair verdict delivered to women from different ethnicities and walks of life. In a strange way, it’s worth drawing a comparison with something like Ocean’s 8 which, although I still enjoy, feels like a sterile assembly, whereas this heist drama offers real people in an all-too relatable compromised situation – and it’s only at that point that you realise that nothing about this film is relatable, we simply want these criminals to succeed because the initial onus of responsibility wasn’t on them and that feeling of bailing out guilty culprits, for better or worse, really resonates with a modern audience.

**spoilers discussed within this paragraph**
As much as this movie is a fantastic thriller, it isn’t without its flaws. Most notably, some of the characters and threads trail off a little but the nature of the semi open-ended conclusion is one that means a lot of these questions do not necessarily require answer. For some this will be satisfactory, for others it will feel unresolved, leaving them without closure. On top of that, some of the events are incredibly predictable. While the details themselves are never clearly laid out for the audience, the way the opening heist is shot blatantly sets up a third act return from one or all of the male criminals. That being said, the finer details were nice to watch unfold and subsequently, you almost don’t care that the signposting felt so overt.

Taking something familiar and reworking it against the expected trend is worthy of commendation. More than that, this film is set up with so many memorable interactions and vignettes that it takes on an insidious quality, working its way into your mind, leaving you pondering the events long after its release.

The Scene To Look Out For:
Without meaning to spoil too much, the title is a touch misleading. As seen in the marketing, one of the crew’s widows is not involved in the preparations for the heist. There are reasons I won’t go into, as they are spoilery, but it was unfortunate because the role in question was played by Carrie Coon, who I rate exceptionally highly and was very disappointed that her arc never really went anywhere and was one of the aforementioned loose threads that could have had a better conclusion.

Notable Characters:
There are a great many scenes that play out like tense character building exercises. Some of these don’t necessarily give us any further detail or insight into the events of the story itself but the kind of person a specific character is; from their temperament to the lengths they will go to in order to achieve their goals. One such example is Daniel Kaluuya’s character, Manning’s brother, punishing the guys who let Harry Rawlins get away with the money. In one way, it doesn’t really move the story along at all, the entire sequence offers little to no plot points or narrative boosters, it merely to serves how ruthless Jatemme is and the whole thing is shot and performed superbly.

In A Few Words:
“A film with a point to prove and does so outstandingly with zero substandard elements” 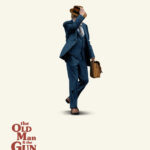 THE OLD MAN & THE GUN 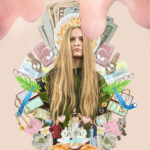 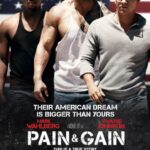