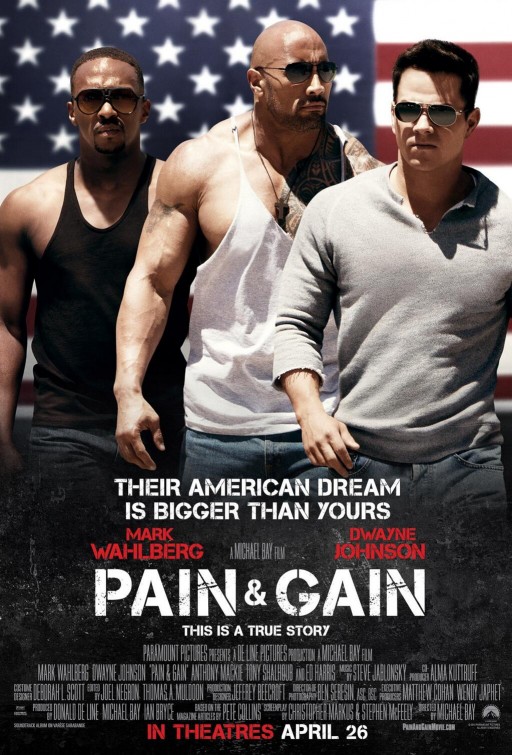 Do You Even Lift, Bro?

Based on real events in 90’s Miami, the story introduces us to Daniel Lugo [Wahlberg], a rather simple individual with a love for weight gain and muscle toning. He seems harmless enough but operates under the simple delusion that he is entitled to more. Working as a personal trainer in the Sun Gym, Lugo meets businessman Victor Kershaw [Shalhoub], whom he believes to be a criminal and therefore not entitled to the life and wealth that Lugo so desperately covets. With the assistance of Adrian Doorbal (Mackie playing Lugo’s steroid-using friend with impotence issues) and Patrick Doyle (Johnson as a cocaine addicted convict who has found both Jesus and sobriety in prison), Lugo stages a snatch-and-grab heist to extort Kershaw of his money and finally live his idea of the American dream. After several bumbling attempts, the trio finally manage to snag Mr. Kershaw and begin torturing him for his earnings. Eventually he relents and the three fitness obsessives live large, falling into bad habits and a false sense of security.

**Spoiler in the last sentence**
Pain And Gain is no doubt one of Michael Bay’s most experimental, restrained and thought provoking releases to date but for the very fact that he made it, it’s still a ridiculous movie. Despite any attempts at unique camera work, sporadic freeze frames and pop-up text, it boils down to the same Michael Bay formula, slathered in homophobia, racism, arrogance, stupidity and sexism. The real difference is that he’s not trying to hide it under layers of teen-friendly shit. From the outset, it’s evident that Bay was simply the inappropriate choice for this film. The real-life events that the narrative portrays weren’t funny but the sheer bungling nature of both the criminals and the police department could work in a black comedy; in the hands of a better writer and director. A good example would be Fargo. Fargo is brutal and grim in its execution but the unreliability and incompetence of the criminal element (not to mention a likeable lead in Frances McDormand) make for entertaining and amusing viewing. Having said that, it only claimed to be based on actual events. Outwardly trying to make this story a comedy was a mistake. Simply illustrating their actions and allowing the audience to make up their own minds would have been sufficient. Subsequently, what we end up with at the end of the film is an incredibly shocking resolution because the acts of torture and murder are undercut by humour. So when Lugo and Doorbal are sentenced to death you can’t help but raise an eyebrow and ponder “Really?” before slapping yourself and saying, “Kidnap, extortion, torture, mutilation and murder? In a southern US state in 1995? Of course death sentence. Stupid.”

Setting aside the real-life comparison, let’s just analyse this movie as a standalone release. The various cuts to simple lens cameras and saturated graphics were actually fairly interesting and kept the film fresh and visually pleasing. The weird plot holes, excessive focusing on muscles/tits and constant bloody slow motion sequences were not. Another curious factor was the insane amount of voiceover work; to the degree that almost every character became a narrator at one point or another. There are two simple schools of thought when it comes to voiceover: either it’s a timeless staple of classic cinema (utilised specifically in Film Noir) or it’s a completely shallow use of exposition to compensate for a weak script and mediocre acting. Personally, I believe it depends on the film/story in question. While it was extremely excessive here, it sort of went hand-in-hand with the on-screen madness. If any of the visual eccentricities were toned down, the voiceovers would have been disorientating and a major source of irritation but when used in conjunction with rapidly escalating chaos and tremendously silly acting, it actually worked. Having said that, the manic melting pot did produce a rather grinding effect and after the first 40-50 minutes, all pacing went completely out the window. It reminded me of Tony Scott’s Domino, which took a really brilliant post-production style (as used in the spectacular Man On Fire), injected copious amounts of adrenaline and infused it into a rather tedious bio tale, just to see what would happen. On a more positive note, the score didn’t disappoint. I like Steve Jablonsky. You could knock him for building on what Harry Gregson-Williams has been doing since the 90’s but he brings a fair amount of memorability into what could be a considerably bland score.

With shows like Jersey Shore, Geordie Shore and The Valleys enjoying years of resounding success, a film of this nature – highlighting the utter stupidity of meatheaded shit-sacks and their weird ‘roided-out sense of self entitlement – is long overdue. But not in the hands of a meatheaded shit-sack director with a weird ‘roided-out sense of self entitlement! Bay fans won’t get it, Americans will feel insulted by it and international audiences won’t care. All-in-all, this film will probably fall into obscurity in the shadow of next year’s upcoming Bay release: a fourth Transformers flick. I guess you can’t blame the man for trying something different.

The Scene To Look Out For:
Having frittered away his cut of the money on drugs and his stripper girlfriend, Doyle is forced to rob an armoured car. Although he manages to get away with two bags of cash (one of which is revealed to be full of coins), a dye pack explodes in his face and he is forced to evade his pursuers half-blinded and covered in neon green paint. Midway through the chase, his toe is shot off, which he quickly pockets and deliriously makes his way to Doorbal’s new home.

Notable Characters:
Dwayne Johnson is undeniably the highlight of this film. I’ve always held Johnson’s acting ability in high regard but here he really gets a chance to stretch his acting muscles – not a terrible pun, honest. Undoubtedly, certain audience members will be offended by his flippant interchanging between worshipping religion and worshipping cocaine but a lot of addicts/convicts tend to bounce back-and-forth like that. Both amusing and entertaining as well as unnerving, Johnson’s character strikes a pretty interesting chord.

Highlighted Quote:
“Why’d you make me do that to you, Victor? I have responsibilities! Jesus Christ himself blessed me with many gifts. One of them is knocking someone the fuck out!”

In A Few Words:
“For a Michael Bay film, it’s challenging, edgy and interesting. As a narrative piece of cinema, it’s just mediocre formulaic nonsense”