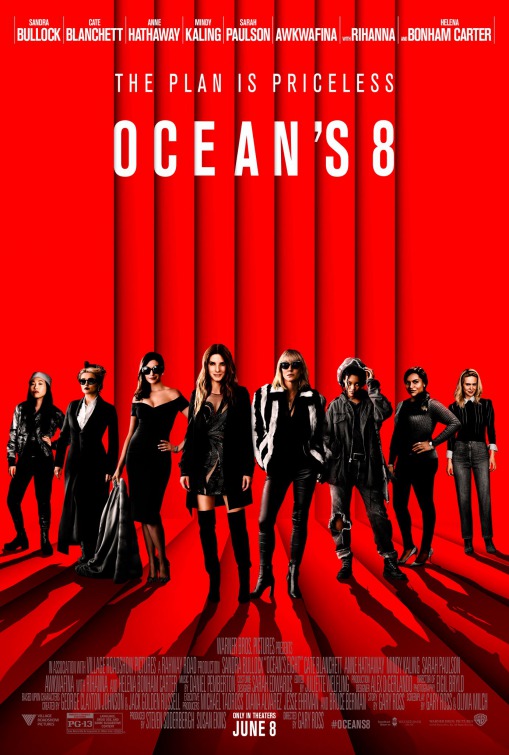 Every Con Has Its Pros

The film opens by introducing us to Debbie Ocean [Bullock], the younger sister of notorious conman Danny Ocean (lead character in the 2001 remake Ocean’s Eleven). Having spent five years in prison, she has finally been released and is ready to pull off an extremely ambitious jewellery heist but she figures it will only require a seven person team and a starting capital of $20,000. Debbie recruits long-time partner Lou [Blanchett] to help run the mechanics of the scam, including conscripting individuals with a very particular set of skills. It is then revealed that Ocean’s plan went from a bank heist to multiple bank heists before settling on something extremely challenging: convincing Cartier to release a one hundred and fifty million dollar diamond necklace to be worn by actress Daphne Kluger [Hathaway] at the star-studded New York Met gala.. then steal it.

One of the first things that stands out about this release is the visual separation from the first trilogy. Soderbergh’s films were very slick but very of their time, with deep saturation and high contrast throughout – as much of the early 2000s tended to be with the rise of digital filmmaking. Ocean’s 8 moves away from this and pays simple homage to heist films of the 60s and 70s with tracking pans and zooms that have long fallen out of fashion. This helps not only forge a new identity for this release but also offers a pleasingly simple associative aesthetic. This is accentuated by Daniel Pemberton’s score which bleeds contemporary elements with the bouncing jazzy rhythms of features like The Thomas Crown Affair and The Pink Panther.

While the cast from the first gelled really well and were a formidable ensemble of the time, I would posit that the group gathered here are superior, owing to the fact they are fewer in number, meaning less small-bit tertiary characters to juggle and there isn’t a single weak component among the group. Now, that will be contested but I genuinely feel that everyone’s strengths are largely capitalised on and the streamlining of the assembled team means more of a connection for the audience and less time is taken establishing the characters abilities and skills. The group can be easily broken down into two separate tiers: the veteran actors and the younger wave. On the one hand we have Sandra Bullock being smooth, confident and in control and while that works, I feel her exceptional comic timing is often neglected (but that’s hardly something that needs to be present in every release), there’s also Cate Blanchett who seems to be having more fun than should be allowed, getting away with it devilishly well, Sarah Paulson as the somewhat cautious “I’m out of this life” character that appears in all these releases but proves she is more than capable and Helena Bonham Carter who should be irritating but comes off as a genuinely endearing part of the group. On the other end of the scale we have Awkwafina bringing a youthful energy and cynicism, complimented by a similar dismissive attitude from Rihanna’s character, Mindy Kaling gives a confident performance highlighting her character’s knowledge and expertise and while Anne Hathaway’s performance is initially hyper to the point of cliché, it pivots nicely and rounds out rather well by the film’s close. There are a few subtle legacy cameos that genuinely play out nicely but the less than subtle celebrity cameos ranged from interesting to painfully obvious and, for lack of a better word, cloying.

For a lot of audience members and critics, a sticking point will be the story – entirely centring on its simplicity. For some this will be a neat, slick jaunt that focuses as much on the characters as it does the sleight of hand, while others will find it too simplistic and devoid of complexity. Personally, I am of the former and while I will happily acknowledge the film somewhat suffers from being a touch straightforward and not exactly doing anything new, it is a simple proof of concept, greatly executed with solid twists and decent bread-crumbing while being conscious of new grounded technology. The only problem is that Ocean’s 8 is lacking an element of crescendo and suspense; Bullock’s character feels so in charge and we trust her so implicitly, that at no point is there much in the way of peril or concern that the plan will not be a roaring success. This may sound like a minor point but for me, it’s the film’s biggest flaw. Having said that, any supposed criticisms present here could quite easily be placed at the feet of 2001’s Ocean’s 11, so it could be said that this is merely par for the course and a hazard of sticking to the original formula so succinctly.

Overall, Ocean’s 8 is a smart, funny, entertaining release and, if one can suspend expectations of intricacy and innovation, it embodies everything this kind of blockbuster should be.

The Scene To Look Out For:
**paragraph full of spoilers**
A heavy amount of the third act rides on an insurance investigator, played by James Corden, dismissing the truth for results; and I take issue with that. After the necklace is revealed to be missing, John Frazier, an independent investigator is assigned to the case and seems aware of the Ocean family’s criminal history, having direct dealings with them in the past. As the film is winding down, we are left wondering if and how they will get away with the fencing of the diamonds. Regrettably, Corden’s part of the story wraps things up a little too quickly and conveniently, with the character himself stating that he doesn’t care about who is responsible, as long as he can get the necklace back. In a film that is genuinely pleasing, this is a particular convenient bugbear that resolves itself far too neatly and jeopardises the suspension of disbelief.

Notable Characters:
As stated earlier, I was truly impressed by the entire ensemble and believe the chemistry between them worked favourably. Having said that, Cate Blanchett really stood out as this film’s forerunner; slick, cool, in charge, playful, stunning wardrobe, she is the embodiment of everything these films aspire to and more. But in truth, is anyone surprised by that?

Highlighted Quote:
“A him gets noticed, a her gets ignored and for once I want to be ignored”

In A Few Words:
“A simple competent heist film that entertains effortlessly and easily proves itself the best Oceans sequel”