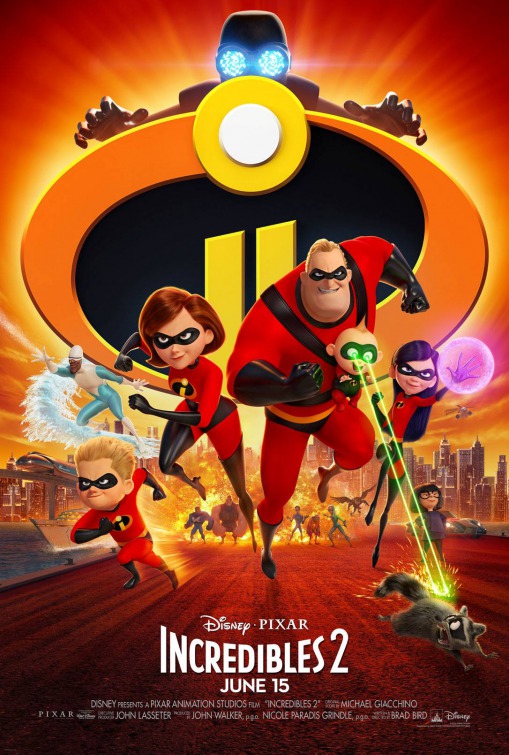 Set immediately after the events of 2004’s The Incredibles, we follow the Parr family (Bob [Nelson] Helen [Hunter] Violet [Vowell] Dash [Milner] and Jack-Jack) as they combat nefarious villain, the Underminer. Despite their best efforts, the bank robber gets away with the money and the family are arrested. With superhero acts still illegal, they are chastised and sent to stay in a motel. Witnessing the battle, tycoon Winston Deavor [Bob Odenkirk] asks fellow hero Frozone [Samuel L Jackson] to reach out and liaise with the Parrs on his behalf. Helen and Bob, realising they have a limited window to find a job in the private sector, agree to meet Winston. All three learn that Winston is an avid fan of heroes, as was his father and wants to change public perception in order to make them legal once more. In order to do this, Winston introduces his sister, Evelyn [Catherine Keener] who can rig tiny cameras into the suits to show the public the good work that is done. Bob immediately assumes he will be the frontrunner for this campaign but the Deavors believe that Helen’s Elastigirl persona would be the ideal re-introductory opportunity; leaving Bob to look after the children – something he has little solo experience with.

If we are being perfectly honest with ourselves, I think it would be fair to say that Pixar’s track record with sequels (outside of Toy Story) is not exactly great. On the one hand they have created some of the most heart-wrenching and beautiful original stories, only to have their follow-ups feel lacklustre or straight-up awful (looking at you Cars 2). Incredibles 2 picks up exactly where the last film left off and that, for me, is the first problem. The definition of a good sequel should be a justified continuation of a story or character’s journey that warrants telling but also forges new ground. I would have assumed a time-skip to age the characters with the audience, showing us Helen and Bob dealing with being grandparents, would be great fodder but I can appreciate that doing so would mean a lot of world-building and altering the visual style to fit the new decade; which could have hurt the film. Having said all that, the biggest issue with this continuation is the effective character arc reset. By the close of the first film, Violet is more confident, Dash has learned some restraint and Bob and Helen have a stronger, more communicative relationship. But in order to create conflict for this film, Bob goes back to hiding things from his wife, Helen takes on Bob’s role from the first film and the kids effectively revert back to how they were, albeit with a higher focus on Jack-Jack. And that’s not to say these aren’t pleasing performances because they’re really great, it’s just a shame.

One thing that is abundantly clear is the progression of the technology over the last 14 years. While the character designs remain unaltered, the level of detail is gorgeous. On top of that the cinematography and lighting are stunning, creating static images that silhouette and glow beautifully. Up until printing this review, I wanted to list my favourite scene as Bob and Helen sitting next to the motel pool, just for the glow of the under-lit water and the luminescent neon signs. It’s also really satisfying to see the return of the masterful pairing of high-octane action scenes with a captivating, nostalgic score. In this way, Michael Giacchino reminds us why he is such a formidable force in the world of cinematic music, destined to go down as one of the absolute greats.

But when you move away from the technical marvel and sit down to analyse the story and themes throughout, a few noticeable cracks begin to form. When this film was first advertised, I rolled my eyes at the prospect of telling a story about a father having to look after his children. I worried that it would feel poorly timed and would pull central focus. Thankfully that wasn’t the case and we ended up with a charming tale of a father trying to get to know his kids (rather than control them), analysing the shift from the archetypal and antiquated “male household role” to a more progressive and modern mindset. But the truly wonderful thing is that this is a subplot, the main driving story is Helen’s mission. Having said that, I would argue that Bob doesn’t learn very much because he still gets what he wants in the end but we’ll step over that for now. In addition to the subtle but welcome gender politics questions there are also some very bold issues about following the law even if the law is wrong, the idea of accountability and oversight of the judicial process and the existence of superheroes keeping mankind weak and sedate (the Lex Luthor argument). It’s very apparent that these conversations seem geared towards adults more than kids but their presence in this film is far from negative, as it means younger audiences aren’t being talked down to and being surreptitiously presented with powerful core values regarding authority and power.

**major spoilers at the end of the paragrpah**
In order to address the flaws, we must first address the production. Incredibles 2 was initially slated for a 2019 release but after work on Toy Story 4 fell behind, the dates were switched and this film was brought forward, meaning an entire year’s worth of development was lost. While what we’ve ended up is fantastic, I can’t help but feel a degree of refining and gestation could have ironed out any present issues. Issues such as the fact that this film is disappointingly predictable; from the story to the character progression, I was not at all surprised by any of the developments. On top of that, a lot of the story was too much of a retread of the first one with a role reversal for Bob and Helen. But before we get dragged into the “how original can a superhero story be” argument, I’ll just quickly touch on the villain. What exactly is Evelyn’s plan? At the start of the film, superheroes are already illegal and while the return of these supers has caused a modicum of public interest, the general message from politicians and the media is that any likelihood or rescinding this is slim to non-existent. Why work with her brother to make legitimise legal superhero activity only to make them illegal again? Again, the argument for replacing a locked door for an improved locked door is fine but this film never really gets around to it, so what we end up with is a solid motivation but flawed logical planning; which is unfortunate.

As stated at the start of this review, I genuinely feel this is one of Pixar’s better follow-ups but that’s really not saying much. Incredibles 2 is a fun, exhilarating and entertaining ride but cannot exceed or truly compete with its predecessor. With the amount of open-ended threads and a few underdeveloped elements, I wouldn’t be surprised if an Incredibles 3 was on the table, whether it will take another fourteen years to produce, remains to be seen.

The Scene To Look Out For:
In a film that deals with so many lofty subjects about justice and responsibility, it’s a genuine welcome treat to see that simple comedy has not been neglected. Nowhere is that more prevalent than Jack-Jack’s backyard fight with the racoon, while discovering many of his newly formed superpowers. It’s silly, pretty, inventive, extremely well designed from a sound point of view and very funny.

Notable Characters:
My highlighted character is Frozone but not for the reasons one might assume. Frozone was a criminally underused cameo role in the first film and even more so in this feature. The only thing I can tell you about the character is that he looks, sounds and acts like Samuel L Jackson, has ice powers and has an off-screen wife who gets a line or two of dialogue per film for comedic effect. The only thing Incredibles 2 adds to that is that he has a theme song. In a film that could have branched out with the supports more, this was very disappointing.

In A Few Words:
“An absolutely fantastic follow-up to one of Pixar’s finest works mired only by a handful of frustrating failings”