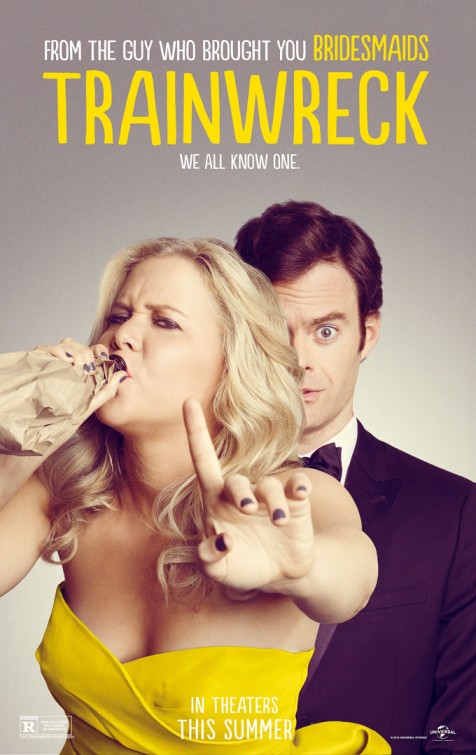 We All Know One

Trainwreck opens with a flashback scene wherein a father explains to his daughters the reason their parents are getting divorced. Suffice it to say, both girls take the advice differently. Amy [Schumer] grows up into a rather successful late-twenties/early thirties writer for a men’s magazine but has taken her father’s mantra “monogamy is not realistic” to heart. She is the ultimate ladette with no intention of settling down or living life any way other than what feels right to her. After a mumbled comment in a pitch meeting turns into a mini-rant about her detest of sports and sports fans, her horrific boss, Dianna [Swinton] assigns her to conduct an interview with leading sports doctor, Aaron Conners [Hader]. The two don’t exactly gel immediately but Amy is inexplicably drawn to Aaron’s company, outside of simple sexual encounters. Running parallel to this is Amy’s relationship with her married sister, Kim [Larson] and her father, Gordon [Colin Quinn] who is suffering from MS and living in a care facility. The more time Amy spends with Aaron, the more she worries that he will eventually find the deal-breaker line and break her heart. As such she sees every fight as an exit and every conflict as an insurmountable obstacle.

This film is, in essence, a role reversal piece. Rather than having the layabout guy who just needs to find the right woman to make him grow up and settle down, it’s a gender swap. I kinda hate that. Apatow did it for 40 Year Old Virgin and Knocked Up as well and I wholly resented the fact that the overall moral message seemed to be change everything about yourself or no one will like you. Is Amy perfect? Of course not, she’s a flawed human being and every now-and-then she’s actually an interesting character but the entire slog of the narrative is so predictable that you just can’t care for her dilemma. What’s worse, there’s nothing especially new about anything on offer here. The jokes feel recycled from the 90’s and I swear that cervix-lodged condom thing is a gag that’s already been done in Sex And The City. And for a comedy that you’d think would be cutting edge or risqué, it’s really quite trite and boring. It never feels like Schumer is actively holding back or being watered down but the film around her simply doesn’t seem to take her to the places that she can stretch her legs and push the envelope. I really want to support this film but in good conscience I can’t. It’s sort of like Bridesmaids all over again (although, admittedly, Bridesmaids was better). A female comedian that I like has penned a feature and while it is pleasantly tender and honest it’s not above puerile sophomoric humour. But the problem is, it’s surprisingly safe and formulaic. You can’t have a line of dialogue defending gay people and then make a load of baseline gay jokes, it’s hypocritical and sends mixed messages. Equally, openly mocking cheerleaders for the titillating exploitation they are (can’t get behind the idea of cheerleaders, just don’t understand it) but then becoming one of them to impress your lover!? Surely that flies in the face of what’s gone before it. Because then the joke is no longer “look at these women, they are extremely talented but all they’re required to do is thrust and gyrate at a braying audience” it’s now “Shit, I can’t keep up with these girls. Look how silly and out-of-shape I am. Ah well, I tried.” As my friend pointed out, it’s like the ending of Grease, just change who you are (or say you will try) and you can fly off in the magic car into the sky. Aww. But I will admit that this is exactly how relationships work, sometimes you do change dramatically when you meet that special someone but the way that scenario is presented here just comes off as false and forced.

Part of the above problem may be down to the fact that there is absolutely no chemistry between Schumer and Hader. Yes, they’re both exceptionally talented comedians and as such are capable of working together and riffing off of one another with great finesse but at no point do I believe these characters feel a thing for each other, other than bemusement. And the more I start thinking about either character, the more it reminds me of the same issues I have with the aforementioned Sex And The City. These aren’t star crossed lovers and they’re not struggling individuals, they’re rich white people. On the one hand we have a woman who lives in a nice New York apartment and is a feature writer for a major magazine. In a time when people are working three jobs just to get by, she’s technically considered rich. But what about the gentleman? Is he from a different world, is there a barrier separating this would-be perfect pairing? Nope, he’s a stupidly rich white doctor who also lives in New York. Oh. Well, what about her lifestyle? He says he’s trying to be ok with her past, stating that the past is in the past and he loves her. Pursuits, interests? Any conflict there? Hmm.. well he is a sports doctor and she doesn’t like sports so I guess you could say that’s their greatest hurdle. So rich white lady with a mountain of independence meets rich understanding white dude. My God the drama, how ever will these two be united? And while there is a tiny line of dialogue implying that Aaron went out drinking with Amy (but as he’s not much of a drinker, he couldn’t keep up) the primary focus is fitting Amy into the socially acceptable view of how an adult acts and behaves. In other words, “Single ladies, change your ways. Achieve life’s true goals of getting a job with an internationally known respectable magazine and compromising who you are so you can settle down with a white guy.. who’s rich.. and has a stable job.. and is good with your family.. and a nice guy.” Ergh.

I very rarely get to comment on the technical side of comedies because the nature of how they’re shot simply doesn’t allow for it. A straight forward comedy is cleanly shot with largely uninventive cinematography or editing; bright and simple stuff, in case any improv’d action or dialogue are missed. And yet Trainwreck makes a handful of faux pas that really need to be highlighted. First of all, they needed to fire their focus puller. A frankly unacceptable amount of shots look and feel completely out of focus and I’m not referring to tracking stuff but locked-off, one person framed stationary stuff that has no business being anything other than completely crisp. It’s distracting and at this level comes off as unprofessional. Secondly, there was FAR TOO MUCH punch up. If you don’t know, punch up is an industry term for when a film is good but other comedians are brought in to add a few touches of humour missing from slower scenes. The only catch is, filming has already been completed, so the only things you can do are a.) have someone say something off-screen or b.) cut to a reaction shot and have the other character deliver the dialogue. It can work but the audio levels are noticeably different and it’s jarring as hell. Now that I’ve mentioned it, it will probably be impossible to miss but all comedies are guilty of this and to me it just implies that either the script wasn’t as funny as they thought it was or the original line just didn’t connect with the audience. But when the replacement line is just as flat, that’s a worrying sign. And as a final point, comedies are like fish and guests. In brief intervals they can be great but you’d be surprised how quickly they outstay their welcome and start to stink up the joint. Even the best comedy knows when to call it a day, leaving the audience wanting more. Trainwreck hangs about for two solid hours and holy God they are long hours. The last thing anyone wants to feel when watching an upbeat, amusing feature is fatigue.

Hopefully this is just a teething issue. Maybe Schumer’s first draft was vastly superior and this is just a debut stumble. Ultimately the critics already seem sold on it, so I’m clearly in the minority but to me this was a wasted opportunity. A chance to really do something different and say something important that was trimmed, boiled and whittled down to a rather flat, mediocre release. Pity.

The Scene To Look Out For:
With a character linked to the sporting world, you can guarantee a wealth of sports cameos. And being a British guy who only really follows rugby, all of those names are pretty much lost on me. Wow! Miami Heat NBA player Amar’e Stoudemire! If you say so. You could have cast anyone and I probably would have believed you. But thankfully there’s Amy’s ignorance to the sporting world which mirrors my own bewilderment. And yet toward the end of the film, LeBron James summons Aaron to the gym in the middle of the night. Aaron dutifully attends, believing LeBron has suffered some terrible injury, only to be confronted by four individuals. LeBron James, Marv Albert, Christine Evert and Matthew Broderick. But we’re expected to know that already. LeBron James is a seasoned basketball all-star and has appeared multiple times throughout the film. We get who he is. Fine. Matthew Broderick is a well-known actor, I recognise him. I mean, absolutely no idea what the connection is, especially as he’s portraying himself. The other two I had to google. Chris Evert is a retired Tennis Hall-Of-Famer and Marv Albert is a well-known sports commentator. And what are these randomly linked individuals doing in this scene? They’re holding an intervention to convince Aaron to reunite with Amy after a fight? The whole thing reeks of ‘let’s get a bunch of cameos in one place for an utterly pointless conversation.’ While these sorts of things are perpetrated often, they don’t always fail this badly, adding nothing to the film whatsoever.

Notable Characters:
Tilda Swinton is perfectly obnoxious as Dianna. She is selfish, arrogant, despicably rude and the sheer epitome of a detestable employer. Every scene she’s in makes you hate her more. It’s like watching a version of Miranda Priestly from The Devil Wears Prada with none of the charm. Brilliantly portrayed and terrifying from start to finish.

Highlighted Quote:
“You have a lot of black friends? Take out your phone and show me pictures of your black friends”

In A Few Words:
“A dismal disappointment. There’s still hope Schumer will return to cinemas with something half decent but Apatow really needs to get back on track fast”