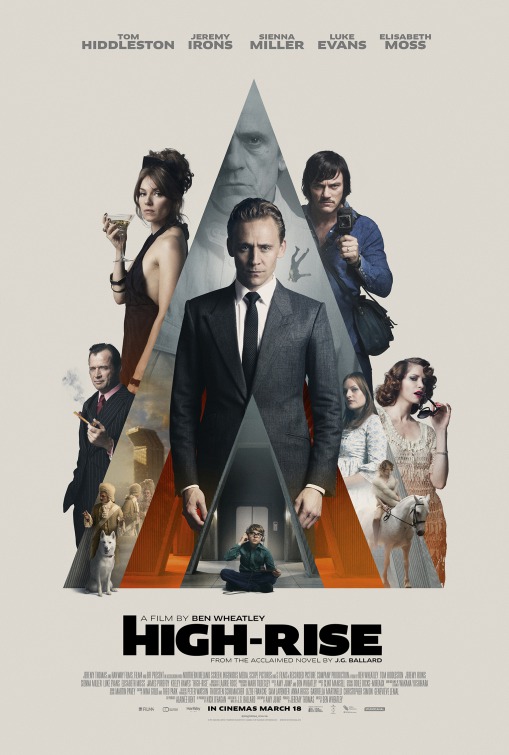 Leave The Real World Behind

Set in 1975, we are introduced to Dr Robert Laing [Hiddleston], a recent new resident on the 25th floor of a state-of-the-art tower block. As he settles in, he quickly learns that while the building provides equally for its occupants (a supermarket located on an entire floor, an indoor swimming pool and various sports and gym facilities) there is a distinct hierarchal divide between those on the higher and lower floors. Those below feel they are pressed upon by the wealthy elite, suffering frequent power outages and lack of supplies, while the privileged few at the top feel the disquiet of the complaints from below are sheer ingratitude, furthermore, they suffer similar power outages and blame those beneath them. Strangely, the only proposed method to combat this disharmony is extravagant drunken parties. Finding common ground with both tribes, Laing learns the more he spends time in the building, the less the outside world seems to matter.

Written around the time when tower blocks were being built at an extraordinary rate in the United Kingdom, Ballard (author of the High-Rise novel) already seemed to know how these towering constructions would turn out – neglected, rundown and rife with crime. Admittedly this story focuses more on the nature of classism within the high-rise, the tower exists as a microcosm of the outside world, eventually replacing the need for an outside world; and as such it’s probably the closest I’ll get to a BioShock film. As a social study, High-Rise is a brilliant feature. At first we are drawn in by the bright strip-lit floors catering to all amenities and desires but quickly realize this is merely a veneer and the heart of the building is rotting from the inside out – an overriding metaphor which presents itself in multiple ways from fruit to teeth.

The key to really appreciating this release is to understand that this isn’t a period drama, nor is it a dystopian science fiction, it’s a surreal thriller, indicative of works like A Clockwork Orange and The Lord Of The Flies. Complaints of the film’s obscure setting, disorientating nature or skewed narrative might rile certain audience members but from what I understand, the script loyally sticks to the source material and as such can’t be held directly to blame. In truth, there isn’t a great deal to criticise; if you are familiar with subversive, avant-garde filmmaking you will know what to expect from this release and probably enjoy the mad, disjointed nature of the film, especially when considering its separation from reality. If anything, I would claim that High-Rise’s biggest flaw is that it didn’t do more to push the envelope. As someone who reveled in the chaos of A Field In England, High-Rise came off as a significantly more mainstream production with a lack of truly outstanding moments. I wouldn’t even say this is really a fault, per se, more a personal preference.

Ben Wheatley is a fascinating talent and both he and longtime collaborator Amy Jump have produced some very impressive features; bold, unusual and everything one would think an independent release should represent. His style is wonderfully approachable despite employing methods and visuals which can feel jarring to the untrained eye. Part of the success of this direction is largely thanks to the acting talent involved. From the top-billed to the supports, everyone does an exemplary job bringing these unconventional caricatures to life, ensuring that the pillars of each end of the societal spectrum are in some way represented; albeit lampooned. Hiddleston commands his performance well and while nobody is particularly likeable, he is probably the closest thing to a relatable individual, embodying the middle class’ desire to rise through the ranks, knowing they’ll never truly fit in and trying to distance themselves from the problem of the lower ranks.

Second to the performances is the fantastic production design, perfectly evoking the key stylistic qualities of Britain in the mid 70’s. The concrete brutalism is brought to life with an air of sterilised beauty and order rather than the decrepit monoliths we associate it with today. From the props, to the costumes and the hair and make-up, the world of High-Rise is a fond look at a lost time that may never have existed. In the same way, Clint Mansell’s unintrusive score compliments the haunting visuals, forcing the audience to feel lost and isolated; mirroring Laing’s own disassociation.

Far from perfect but in my opinion thoroughly enjoyable and a worthy directorial medal on Wheatley’s chest.

The Scene To Look Out For:
Unlike most, surface-level narrative releases, High-Rise deploys allegory to make a rich tapestry of points and observations. One of my favourite examples of this the wonderful drive that there is no money to be had anywhere and the rich are just as starved as the poor. The truth is everyone is suffering equally but believe those above/below them have it better off and are either withholding resources or whining unnecessarily, respectively. A concept which is highlighted by the line, “That’s the problem with the poor, they’re obsessed with money.”

Notable Characters:
The supports are a host of eccentric individuals but none of them really stand out as truly noteworthy. Like an eclectic mix in a Gilliam release, anyone who isn’t front-and-centre fades against the backdrop somewhat. This partly ties in with my aforementioned gripe about pushing the envelope further. Unlike a David Lynch film where every character is memorable in their own way, those present feel they are filing a social class tick-box quotient without escaping the base trappings of their inspiration. But, in all fairness, this could be a problem with the source material rather than the film.

Highlighted Quote:
“It takes a certain determination to row against the current”

In A Few Words:
“A slick, stylised – albeit flawed – release combining all the best elements of Wheatley’s oeuvre” 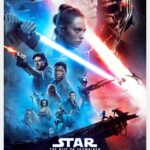 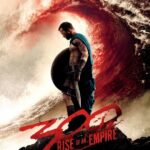 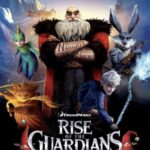 RISE OF THE GUARDIANS