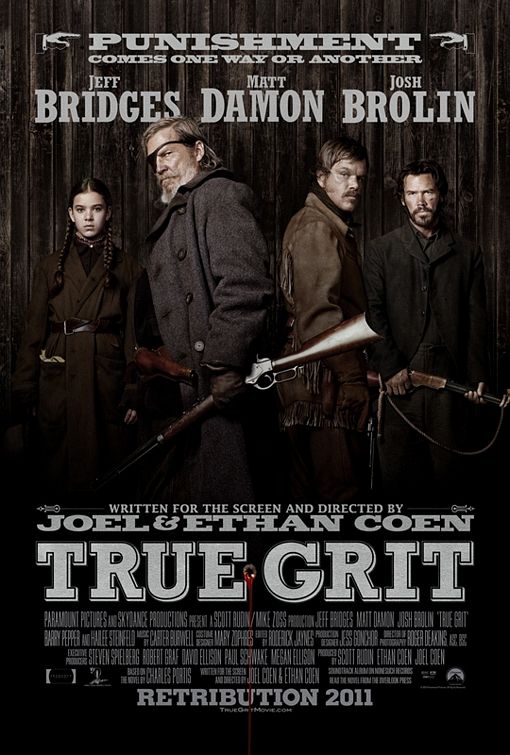 Punishment Comes One Way Or Another

As this version is much more loyal to the book than the 1969 original, it’s best to view it as an adaptation of a novel, rather than a remake. Subsequently, I will try my best to avoid any comparisons between both films.

Set in the 1880’s, True Grit opens on a very peculiar, blurred shot. As the image focuses, the narrator explains that a drunken villain (and recent employee), Tom Chaney [Brolin], gunned down her father, stole a horse and high-tailed it out of town. After settling her late father’s affairs, young Mattie Ross [Steinfeld] enquires if the town has any resident Marshals. Learning of a cantankerous, trigger-happy lawman named ‘Rooster’ Cogburn [Bridges], she visits him and attempts to pay for his services; at first glance, he refuses the headstrong fourteen year old. As Mattie’s business in town draws to a close, she is visited by a Texas Ranger, LaBoeuf [Damon], who is hunting Tom Chaney for an outstanding warrant and reward in Texas. After a certain amount of misdirection and bartering, Mattie persuades Cogburn to accept her terms of employment and accompany both him and LaBeouf into the Indian territories. Along the way the trio encounter various individuals before finally (and somewhat accidentally) catching up with Chaney.

Westerns are a hard one to judge these days. After falling flat on their face in the eighties, we were treated to a handful of odd endeavours such as, The Quick And The Dead and Young Guns but the titles that do well – Unforgiven and 3:10 To Yuma come to mind – are very much revisionist westerns, intent on producing an authentic backing for well-told, compelling stories; the key phrase seemingly being ‘harsh realism.’ No truer is that than with True Grit. By going back to the book, the Coen Brothers have crafted a completely different story to the one audiences are probably familiar with, restoring much of the heart and humour of the tale.

The whole piece is littered with astounding performances; from the leads to the support, to the extras – everyone excels. Not only that, each character seems to compliment one another, eg. Steinfeld’s flawless resolute rants often back-handed with a well-placed mumbled one liner from Bridges. And as with the majority of the Coen Brothers’ films, no matter the genre, each character is required to possess a perfect middle-ground between humour and seriousness. All of which combine to offer a thoroughly believable and endearing spread of truly American individuals. Technically speaking, the film is sublime, combining many similar attributes that imbued Miller’s Crossing with that same depth and period authenticity. Many may underestimate these elements but Roger Deakin’s cinematography work is simply stunning – exquisite camera movements, exceptional lighting and an absolutely glorious washed-out palette. Equally, another frequent Coen contributor, Carter Burwell, has provided a subtle complimentary score, lifting hymnal tones and period-fitting twangs that range from the whimsical to something severely dark and poignant.

The only flaw I could find – and one I’m still not overly sure I agree with – is the lack of layers to this film. On one hand I want to award this film a very solid ten out of ten for an exceptionally well crafted piece of cinema but on the other I feel the need to demote it to a nine out of ten on the basis that it follows the book so loyally that the story is incredibly straight-forward and lacks depth. But in truth, it’s not complication or detail this film lacks but a wealth of cynicism that thrives in contemporary cinema. The plot is a clear journey and the characters each develop their own arc. There are no subplots because there is no need for them. There is simply a beginning, a middle and an end. And for that reason, this will be the third 10/10 I will have awarded in the space of thirty days – a new high for me.

The Scene To Look Out For:
There are countless standout scenes that have been rattling around in my head since first viewing the film but none more-so than Cogburn’s exchange with The Bear Man [Ed Corbin]. After a spat, Cogburn and Mattie separate from Mr. LaBoeuf, later they came across a Native American who agrees to fire a shot in the air should he think they were being followed. Sure enough, a shot rings out and Cogburn surmises it is LaBoeuf, intent on tailing them to Chaney and then claiming the reward; he explains as much to Mattie and decides to wait for him to catch up, so they might confront him. Time passes and out of the wood strolls two horses, one carrying a man adorned in a bear skin. The interaction itself is incredibly simple and yet surprisingly hilarious, commencing from the point that Cogburn utters with sheer deadpan genius, “You are not LaBoeuf.”

Notable Characters:
It’s a tough call. As previously stated, the entire cast are on top form and each performance is just as impressive as the last but for Bridges to surpass John Wayne’s Oscar winning role with something equally memorable is truly astonishing. Having said that, even this giant of cinema is wholly upstaged by the fifteen year old newcomer, Hailee Steinfeld. Not only does she surpass Kim Darby in the original, she pretty much wipes the floor with the entire cast. I was convinced that the only young talent we had to keep an eye on was Chloe Moretz, I now realise that if these two were to ever find themselves on-screen together, choosing the finer actress would be an incredibly demanding task.

Highlighted Quote:
“It astonishes me that Mr. LaBoeuf has been shot, trampled, and nearly bitten his tongue off and yet not only does he continue to talk but he spills the banks of English”

In A Few Words:
“Wondrous cinematic release with the confidence to tell a simple story, relying solely on distinguished performances”