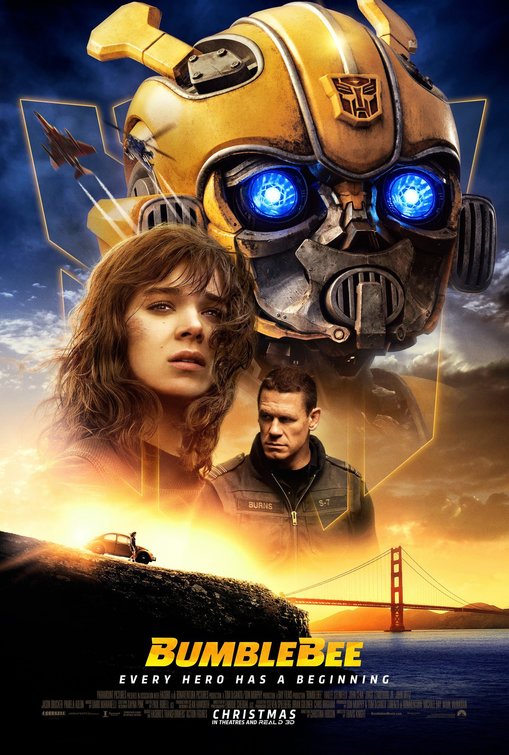 Every Hero Has A Beginning

1987. On the planet Cybertron, the war between sentient robots the Autobots and Decepticons has reached a critical point. The resistance members are forced to evacuate and B-127 is charged with scouting a new world to inhabit. Said world is Earth and upon his arrival, B-127 encounters a US military group in training, led by Agent Jack Burns [Cena]. In a fight with a decepticon that pursued B-127, most of Burns’ unit is wiped out and the alien refugee passes out, disguising itself as a Volkswagen Beetle. We are then introduced to teenage Charlie Watson [Steinfeld] who is still getting over the recent loss of her father. Awkward and rebellious, Charlie lashes out at her parents, doesn’t seem to have many friends and works a summer job that she hates. While working on her father’s car, she discovers the Beetle and convinces the garage owner to sell it to her. Learning of the Beetle’s true form and that he has no memory of who or what he is, Charlie names him Bumblebee and the two become friends.

Right off the bat, it is evident that Bumblebee is nothing like the Transformers fare that we have seen to date. From the premise to the quirky interaction, this film draws heavily on audience nostalgia for 80s films wherein a kid befriends a weird creature and goes on a crazy journey of self discovery and daring adventure, in the vein of ET, Flight Of The Navigator, Gremlins, etc. Keeping the threat small, tight and simple allows for an amazing and emotional fun energy to shine through that gives this release such a fresh feeling and coming in just over two hours, it’s a welcome break from the relentless three plus hour slogs that the other adaptations have been to date. What’s more, this grounded simplicity makes way for Charlie’s character to come to the fore, giving us a genuinely pleasant and relatable teen drama. Sure, it hits a lot of overly-trodden beats and veers into cliche territory on more than one occasion but another good recent comparison would be something like Spider-Man: Homecoming, which gave audiences the spectacle they were sold on and the heartfelt centre they weren’t expecting; but with Knight coming off the back of Kubo And The Two Strings, that’s hardly a surprise.

In truth, the writing flies in defiance of the world that Bay created. Gone is the hyper-sexualisation and cringeworthy dialogue and in their place we have legitimate family dynamics, honest comedy and relationships that form naturally and organically. But none of this would mean anything if its central star couldn’t channel a frustrated 18 year old who has recently lost her father and is trying to just get away from her life. Honestly, Charlie will feel familiar to so many teenagers and not in a Hollywood, romanticised way but as an authentic discontented young person. And this is largely down to Steinfeld who legitimately deserves so much more attention and praise for what she’s doing. Charlie is a fantastic, capable, intelligent and emotive female lead who feels like a real person rather than a caricature.

Again, in defiance of Bay, we have to talk about the redesigns. Ultimately, there are three main transformers: one hero and two villains. The designs are close to the original cartoon and the simple colour scheme makes them easy to distinguish who-is-who. I cannot tell you how much of a leap forward that is. With the camera largely still and the action clear, we can finally appreciate how astoundingly good these effects can be. The performance of the transformers is great and their physicality gives them so much personality. What’s interesting too, is that although the action is much simpler, the stakes feel higher. This is sort of similar to releases like Mission: Impossible – Fallout which gave audiences a taste of classic cinema where the threat feels real because it’s not 100% CGI. During one particular chase, a car slams on the brakes at a red light and so many vehicles stop inches before impact, leaving one to finally careen over the roof of the non-pile-up, making these near misses feel oddly surprising, defying our explosive expectations.

The film is, admittedly, far from perfect and it’s no Iron Giant as some will have you believe. It walks through some obvious tropes and the diving subplot is painfully predictable but it’s hard not to give these things a pass when considering how poor the previous films have been. Also, while I love the work of Dario Marianelli’s, his score lacks Steve Jablonsky’s pounding themes. Again, the softer tone reflects the film’s overall soft reboot direction but it also loses a bit of that memorability and presence.

In summation, this is a really pleasant, lively and satisfying release but if you had told me six months ago that a Transformers spin-off, which is also the sixth in the series, was the film we were all hoping for some twelve years ago, I sincerely wouldn’t have believed you. But now we’re here, I’m so very excited to see where this series can go now it’s finally got its proper debut.

The Scene To Look Out For:
In the UK, our films open with a certificate from the BBFC, highlighting the film’s age rating and the various content warnings. To see this is the first Transformers film since the 80s to be rated PG, I was quite surprised. More surprising than that, was the level of violence they managed to get away with. While Bay’s use of violence was visceral and grimy, with street executions, there was a poetic martial arts to the fighting but it still resulted in robots being shot to death, cut in half and humans being liquified. That last bit is important. To date, humans have been killed in these movies and it always felt grimy and unnecessary but the way this is handled felt more like a cartoon and very much brought me back to the over-the-top but still family friendly execution of Men In Black and if these films had started with this tone, who knows how powerful this franchise could be now… I mean, it’s made billions, so it’s not like it’s doing that badly.

Notable Characters:
Charlie’s side-kick and co-lead is Memo, the nerdy guy who lives across the street from Charlie but has never had the courage to introduce himself. I’m very conflicted about this character. On the one hand, he’s a decent bit of comic relief and a nice-guy love interest for our lead. I also like that she keeps him at arms length because she’s not ready for a relationship and he respects that. But he’s also a six-pack-wielding hot guy with an amount of bravery and confidence that seems to bubble out of nowhere. I get why he exists, I just think he could have been written a touch better. Oh and I’d just like to add that while I’m fine with the whole ‘speaking through the radio’ thing, Dylan O’Brien was fantastic as Bumblebee’s actual voice. They need to bring him back.

Highlighted Quote:
“They literally call themselves Decepticons. Does that not send up any red flags?”

In A Few Words:
“If you’ve given up on Transformers films or never bothered to try one, this might be the film that changes your mind on the franchise”