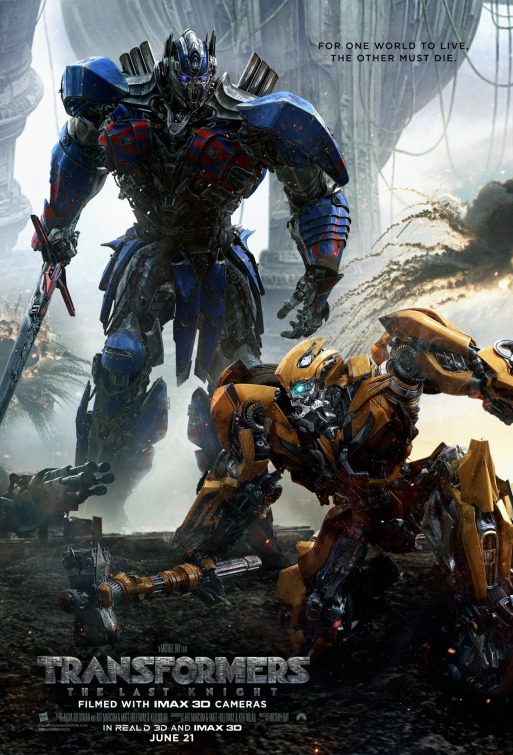 For One World To Live, The Other Must Die

Years after the events of Transformers: Age Of Extinction, Cade Yeager [Wahlberg] is wanted by the law, as are every faction of Transformer, constantly hunted by the newly formed Transformer Reaction Force or TRF. Seeing it as his mission to protect the Autobots and defecting Decepticons, Cade sets up in a junk yard and assisting the robotic allies when he can. On one particularly scouting mission, he comes across Izabella, an orphan from the battle of Chicago (depicted two films ago) and an ancient Transformer who gives him a talisman. This alien artefact attaches itself to Cade and he is charged with a mission to find the staff of Merlin, which is actually Cybertronian technology. At the same time we are introduced to Professor Viviane Wembly [Haddock] who is kidnapped by her car (a hidden Transformer, obviously) and brought to the castle of Earl Edmund Burton [Hopkins] who has something very revealing inside into the secret history of the Transformers and the Earth itself.

Reviewing these films is a genuine chore; nothing about them really changes or evolves yet we are expected to critique them uniquely, when in truth copying and pasting would be just as sufficient. Seriously, how are these big bombastic films so boring and somehow so fucking successful? Things like Independence Day were undeniably dumb but they had intense spectacle and charm. The only similarity here is that Transformers is dumb, which is a genuinely painful thing to write because as much as this franchise is and always was promotional material for toys, it has the potential for an interesting story – but not in its current form and certainly not under Bay’s direction. Speaking of which, with this being Michael Bay’s last outing in the Transformers universe, there is a genuinely apparent attempt to give a bit of cohesion, closure and significance to all five of these movies – what with the Witwiccan line of succession and a laughable connection to essentially every famous or influential figure from history being aware of or complicit with Transformers – but it feels as dismissive and tacked on as every other plot development in this film; something to be wheeled out then flung in a ditch for something else to take its place.

Not wanting to break form with this fifth instalment, the key focus is still on the human characters. Cade’s once oh-so-important daughter is now absent because she’s in college and he’s a fugitive, so he’s just hanging out on Native American reservation territory, occasionally scouring the ruins of Chicago for parts and newly arrived transformers. Wahlberg continues to deliver as much zeal and enthusiasm as the previous film, in that he’s giving a reasonably energetic performance but there’s no heart behind any of it. Haddock does the best she can with her defiant, intelligent, hoity Oxbridge type who, in Mark Wahlberg’s words, dresses like a stripper. The film bites back saying, “How dare you, a woman can be both smart and sexy!” and while that’s completely true, this script has no idea what denotes intelligence outside of exposition, snobbery and various honorific titles. Isabela playing the role of Izabella is actually the most crushing for the fact that she is a rather promising young actor but this entire film wastes her in a nothing role of sass and tears. Izabella isn’t the only young character, as appeared in many of the trailers there are four boys who journey through the scarred Chicago but they are written out literally by the end of the scene, proving themselves to be unnecessary filler in a film that didn’t need any more bloody filler. Oh and Josh Duhamel’s back too.. but who cares? So aside from Anthony Hopkins (who I shall revisit later), that leaves us the mechanised cast. Everyone knows the score by now, Megatron will execute some terrible plan making him in fact a manipulated and inefficient pawn and Optimus will turn up and save the day, probably while monologuing “I.. am Optimus Prime” (He says it four times, if you’d like to know). Only this time, the twist is that Optimus has been brainwashed into attacking Earth, leaving the primary Autobot of choice Bumblebee. I’m pretty fucking sick of Bumblebee. This iteration is nauseating. He’s supposed to be some young, immature punk who uses various radio frequencies and recordings to communicate but that wore thin a long time ago. On top of that, they try to give him extra backstory by making him a World War II veteran (a point of such pride that he features in propaganda posters) which raises so many more questions and problems than anything else and the focus given on his real voice is so excruciating that it transcends moronic. There are also a string of other forgettable spinning cutlery characters. Fan favourite Hot Rod is finally here with weird blue bug eyes and a French voice actor because.. reasons? A submarine Transformer (I think) that didn’t actually transform and if it wasn’t a Transformer, someone needs to tell Bay how submarines actually work: loop-the-loops are not a thing. And finally Quintessa, the villain of this release. Why in the name of holy hell is Quintessa a tiny lady? I don’t get it. She’s five foot high and has a human face. There’s no explanation as to what she is or what her powers are but everyone seems to be aware of this previously unmentioned individual. Baffling. Holy shit, I just remembered that Cade has a side kick called Jimmy.. ah well, he literally does nothing.

The truth is I can’t hack whatever Bay has been producing these last ten years. From the marvellously cliché tropes to the bizarrely impossible tick-box features, Bayworld is mind-numbing. The way people talk, act, move, everything feels like a video game written by a twelve year old and I will openly concede that’s a straight-up insult to video games and twelve year olds. Nothing furthers character development or the plot, everything is shot and delivered as simplistically as possible into the camera. Characters feel a certain way? They will tell you. There’s no room for subtext or subtlety here. Want to liven the mood every ten goddamned minutes? Easy, simply chuck in a weirdly dated reference about J-Lo or Tiger Woods, either that or some other horrendously flat joke. And the film carries on like this for two and a half hours. A constant barrage of hollow flare paced with hideous attention-deficit skittishness. With frankly astonishing ease and brazenness we are taken from a poor man’s opening fight from Gladiator to a deserted town that feels like an asylum with a few randos milling around while buildings explode, all the while serving up helpings of objectification, over-sexualisation and barely-curbed racism. The script even does its best to self deprecatingly highlight its racist tendencies with a conversation between Cade and a Native American cop {Don’t call me Chief, it’s Sherman / Aren’t you the Chief of your people? / Yeah but coming from you it sounds vaguely racist} but despite that we still have characters like Mohawk who has a “street” dialect fresh out of Short Circuit 2 and a Vespa that can only say Chihuahua in a Latino voice because he’s broken. But I’m no longer surprised. These are not things that I am shocked to see, they are things I expect in this release. If anything, I’m more astounded when they aren’t present. They are as much directorial traits as long corridors are to Kubrick, I just don’t understand the base appeal; surely people aren’t that mouth-breathingly dumb.

To give a moment of positivity, Jablonsky continues to punch out his memorable and pounding theme which remains completely serviceable. The film even goes so far as to create a moment of levity to poke fun at how absurdly “epic” and over-the-top it can get. It’s not funny but that’s neither here-nor-there. I will also admit that as ridiculous as the story is, it’s actually much more straightforward than its predecessors: Optimus is turned evil by a witch who wants to use a magic stick to drain the Earth of power. Everyone races to find the stick. It’s not good and it overly contorts itself in the false assumption that this will make it seem clever but that doesn’t detract from the fact that I can sum up the basic core narrative easily. The cinematography is also astoundingly good. All those rich colours, deep contrasts and slo-mo nonsense are aided wonderfully by the scale and beauty of the IMAX cameras. The fact that 90% of this film is shot with IMAX makes the regular widescreen shots feel like odd choices but one cannot take away from how detailed everything feels. But, of course, all of that is shat in the bin due to the hyperactive editing we’re subjected to.

At this point you are either a committed cinematic Transformers fan (and may God have mercy on your soul) or you’re simply holding out for some sort of miracle when the next director comes along. Either way, I can’t see what people are getting out of these bloated, farcical messes as they deteriorate more and more with each passing feature. If I had to summarise the entire film in one sentence, something about the film that would either sell you on the release or give you cause to walk away, it would be: Mark Wahlberg grows a fucking sword to save a robot’s life. Do with that what you will.

The Scene To Look Out For:
While searching through an old study for the magical staff of Merlin.. or Cybertron.. or whatever, Cade and Viviane tear the room apart barking out painful double-entendres that are supposed to infer to everyone else in the house that they are having wild, passionate sex. From the horny old dears who are desperate for this highly educated woman to simply find a man (one of whom is Rebecca bloody Front!), to dopey lines like, “Just shove it in there” the whole thing feels like something out of Austin Powers or a Carry On flick; made all the more agonising for the utter lack of emotion, passion or basic level give-a-shit that one would expect from a paycheque of this size.

Notable Characters:
With an uncomfortable degree of energy Anthony Hopkins really commits to this shit. He rattles off scores of lines about Transformers history and leans into every terrible joke about “snuggling Agnes” or who the hell ever. One could argue he did the same thing in the Thor franchise and while I would agree, it feels worse here. Like a grandparent who’s walked into a strip club and is drunkenly being brought on stage. I can’t tell if he’s into it or he’s just going along because everyone is cheering but I feel something terrible is happening. To top it off, he’s also accompanied by an absolutely infuriating side-kick that I don’t feel is worth mentioning on account of being a poorly written cretin.

Highlighted Quote:
“Something’s coming and you can’t shoot your way out of it”

In A Few Words:
“Transformers: The Last Knight somehow manages to show us everything that could happen in this film while simultaneously and paradoxically showing us absolutely nothing” 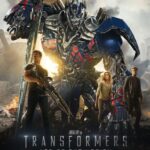 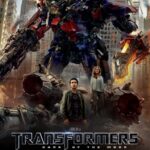 TRANSFORMERS: DARK OF THE MOON 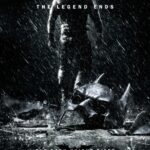