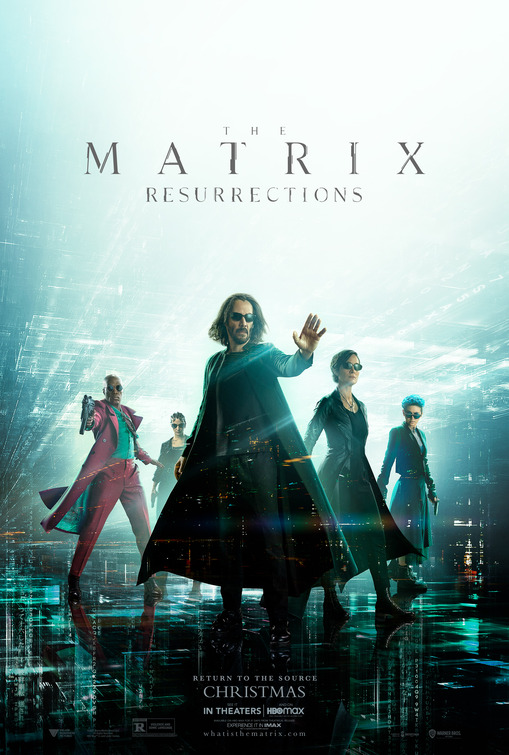 Following the events in the original Matrix trilogy, Neo/Thomas Anderson [Reeves] is still trapped in the system, led to believe he is a game designer and the story of The Matrix, The Matrix Reloaded and The Matrix Revolutions are merely a constructed narrative in his award winning video game. To help him make sense of what is real, Anderson has regular appointments with an analyst [Harris], who has prescribed him a series of medication to keep these uncertainties in check. All of this is upended when Anderson encounters a digital recreation of his former mentor, Morpheus [Abdul-Mateen II] and a new generation of freed minds led by Captain Bugs [Henwick].

I think we can all agree, Reloaded and Revolutions couldn’t hold a candle to the original but they were two flawed halves, exchanging strengths and weakness but working well enough as a whole to effectively entertain, move things forward and draw a conclusion. At this point, the worst possible outcome for a belated Matrix sequel would be to replicate the mistakes of the past while committing all new ones. To take an iconic property and marionette it around like a meat puppet exhibiting enough fan service to sate viewers, while never actually saying anything of substance. While I will admit, it never explicitly gets that bad, it’s not by much.

The Matrix Resurrections opens with interesting potential, presenting a lot of symmetry and looping leading to a remarkably meta self assessment. The trouble is, it spends nearly an hour figuring out what it wants to be, in an attempt to rationalise and justify its existence and even that is heavily laden with flashbacks. And I don’t just mean the time between the third film and this fourth outing, but repeated use of archive footage interspersed throughout. This has the unintentional side-effect of continuously reminding you of a cold, hard fact: The Matrix was a revolutionary game changer, Resurrections is sadly not. Developments feel like references and callbacks but the universe is rarely pushed forward. And while there are clearly examples of atrocious decision making in the original trilogy, they were at least populated with spectacular and gripping sequences; here we have very little that can be singled out as noteworthy or envelope pushing.

In the film’s own words, it tries to figure out what a sequel to The Matrix should look like. Is it an existential analysis? Is it about revolutionising the industry through technological advancements? Is it about astonishing action and staggering fights? The film never properly answers this question, I’m afraid, but I will say that the existential analysis is present (if a little watered down) but the tech is industry-standard at this point and the action and direction are very disappointingly run of the mill. There’s a hint that we’re supposed to feel a sense of deja vu, as the characters suggest, but it’s all so heavy-handed and comes off as little more than lazy regurgitation.

**spoiler paragraph**
I genuinely enjoyed the hybrid world building that takes place outside of the matrix; the idea that there is a hidden utopia after Zion fell, which could only exist due to a partnership between mankind and machines. But even this leaves us with so many unanswered questions and as we only scratch the surface (basically seeing the entrance, an office, a lab and a cell) it isn’t enough to stack up against the wealth of failings running through its core.

Despite the lengthy runtime – the longest Matrix film to date – none of the characters feel utilised enough and you’re left wondering where all the time went. A lot of the Sense8 cast make up the Mnemosyne crew but the bulk of the screen time is with Reeves. The first half of the movie leads you to believe Abdul-Mateen II will play a pivotal role but he is often sidelined and falls down the roster hierarchy as events unfold. Similarly, I felt the movie would position Moss in a point of significance but she is almost entirely absent. What about Groff or Harris? Admittedly complicated and far from satisfactory. Again, this isn’t to say the performances are bad, just that what these actors are expected to do is unusually mundane.

As with the action, the score work isn’t up to scratch. Don Davis hasn’t returned and instead we have Johnny Klimek and Tom Tykwer and while this score and its new themes are perfectly functional, it contains nothing truly memorable. As a matter of fact, I keep circling back to that same phrase. Cinematography, music, visual effects, writing, performances, they’re all functional but nothing stands up. And while that may suffice for a rudimentary yet enjoyable sci fi romp, it doesn’t cut it considering the weight of what came before in this franchise. A fact which isn’t helped by repeatedly showing you clips of the last three films, like a slap across the face, screaming “Why are you watching this?”

One of the reasons The Matrix was so powerful, is that it was inspired by some of the most mind-bending groundbreaking comics and anime of the time. Unfortunately, Resurrections seems to be drawing inspiration from its predecessor, thereby saying and doing nothing new. I wanted progression, I wanted to be challenged, I wanted those that have hijacked the concept of the red pill to be taken down a peg, I wanted a true expression of how you can be a different person in a simulated construct, all while maintaining the tension of a world on the brink of collapse. But rather than feeling like we were getting nearly twenty years of gestational concepts, we end up with a pale reflection of a society that was heavily influenced by the philosophies and technology depicted in The Matrix and in a world where you could be free to do anything, this was the limits of their imagination. I honestly have no idea if this is going to launch a fifth sequel but whatever comes next must be more sophisticated, more revolutionary and more exceptional on every front – otherwise, what’s the point?

The Scene To Look Out For:
I stated earlier that there is so very little about this movie that stands out. Even now I’m racking my brain for a spark of excitement, a development or visual that made me sit up in my chair and drew me in. The best I can give you is a fairly small coffee shop, filled with heavily armoured police desperately trying to keep Neo and Trinity apart. There’s a moment there but it’s brief and before you can appreciate it, it’s gone.

Notable Characters:
Jessica Henwick is fantastic and one of the few elements I unabashedly loved about this movie. If you were to tell me this was a spin-off or solely about the next generation of runners without any returning characters, I would be fine with it, providing she was at the helm. Capable, commanding, compelling, the only point of contention I had was that her character had a stupid and obvious name.

Highlighted Quote:
“Did you know hope and despair are nearly identical in code”

In A Few Words:
“Shockingly disappointing return that, at times, feels little better than fan fiction”