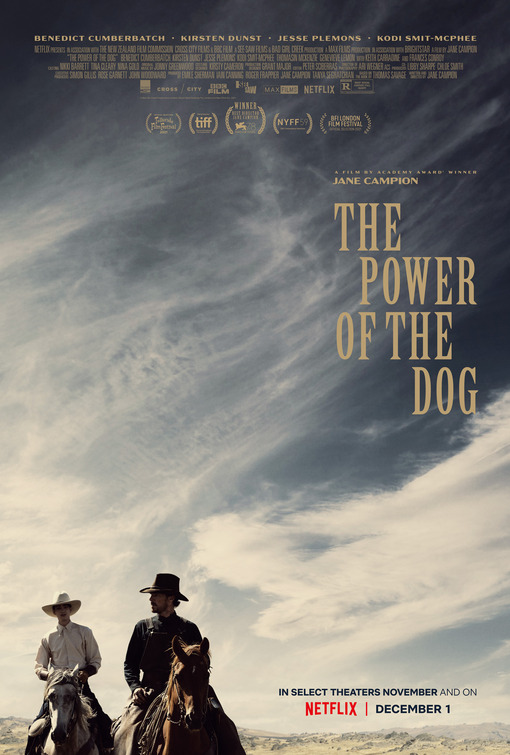 In 1925, the dying last breath of the old west, we are introduced to two brothers, wealthy ranch owners George [Plemons] and Phil Burbank [Cumberbatch]. Both have so very little in common, conflicting in temperament and manner – the only link is their repressive upbringing. On a cattle drive, George meets and falls for a widowed innkeeper named Rose [Dunst], while Phil taunts her only son, Peter [Smit-McPhee], for his effete manner and lisp. To the chagrin of Phil, George marries Rose in secret and brings her to live at the ranch but living under the same roof as Phil and his incessant goading, drives Rose to drink. The dynamic shifts when Peter comes home from medical school and Phil turns a leering eye to the young man.

This is Jane Campion’s first feature in film in over a decade and it is an absolute affirmation of her ability. From start to end the narrative wades through layers of deep psychological scarring, glimpsed momentarily through hinted backstory. Much like Slow West – which also featured Smit-McPhee – The Power Of The Dog is filmed in New Zealand, giving it an authentic frontier feel and the sensation of being truly isolated in the wilderness, cut off from time and reality. All of which is captured stunningly by Ari Wegner, serving up a rustic, lived-in bleakness, much like her work on Lady Macbeth. And circling above all this is Jonny Greenwood’s haunting score, which shifts to a more aggressive gear once Peter arrives at the house and Rose starts to notice Phil’s grooming.

But as beautifully as this feature is written and constructed, the acting is frankly impeccable. Starting from the top down, it’s impossible not to talk about the deep, flawed complexity of each of the leads. Firstly, Phil is a thoroughly detestable bastard brought to live spectacularly by Cumberbatch. There are allusions to a sympathetic victim somewhere in there but the cycle of abuse continues unabated as his behaviour is reprehensible. It would be easy enough for Phil to be a larger than life villain, two dimensional and bland, twirling his moustache. Instead, we have a man who has shunned his wealthy upbringing, refusing to bathe and adopting an accent and lifestyle he wasn’t raised for, as a form of hero worship. This is because Phil is painfully enamoured with his deceased mentor – the never-seen Bronco Henry – and while his crew look to him, he gives so little back. As stated, this is one of Cumberbatch’s best cinematic performances, partly for his towering presence but also for the sheer subtlety on display. In one moment his heavy footfalls thunder through the house and he looms large while handling the animals, only for this to turn to a slight elegance as he sexually fixates on artefacts left by his idol, such as a saddle or handkerchief.

But Phil on his own, while compelling, wouldn’t be nearly as memorable if it weren’t for the characters around him. Halfway through the movie we learn how steeped in privilege the brothers actually are. Phil has clearly chosen to reject this and embrace the land while George defies expectation to marry a seemingly random woman of little merit in his parents’ or the governor’s eyes. Plemons has that wonderful distance to him that makes George both fascinating and impenetrable while Dunst is on form as a woman on the edge; caring and kind but meek and out of place, trapped in an oppressive house (though not necessarily an oppressive marriage) but unable to speak up. And then there’s Kodi Smit-McPhee as Peter, who is absent for what feels like a third of the movie but who, by the film’s close, is one of the most fascinating individuals – but to keep the bulk of this review spoiler free, I’ll reserve my assessment of him until later.

The Power Of The Dog is one of those examples of cinema that shows how rich storytelling can be while saying and doing so very little. Subsequently, there is going to be one very heavy criticism laid at its feet by the average viewer: that it is boring. Naturally, this is incorrect. The story and performances are intricate and multilayered, while the music and visuals are forlorn for the end of an era and the darkness it has wrought. But I will admit that after such a protracted and drawn out pace, the film wraps up fairly quickly in the end. No sooner do we feel like there will be a climactic showdown, the story shuffles to a close, with the viewer left to question a handful of events. Personally, this is what made the film for me but I can appreciate it won’t be for everyone. No doubt this will excel with critics and award ceremonies, while the viewing public will openly reject it but for those looking for a specific type of story, this one tells it magnificently.

The Scene To Look Out For:
It is revealed that Rose used to play the piano for the cinema but is out of practice. Regardless, George enjoys listening. Unfortunately, he uses his money and position to elevate her abilities, piling on unintentional stress and anxiety. We’re not talking about signing Rose up to join an orchestra but he makes the grand gesture of investing in an expensive piano and asks Rose to perform in front of a handful of guests. Rose is evidently nervous about the upcoming recital but rehearses nonetheless. All of which is corrupted by Phil, who sneaks into the house when she is practicing and upstages her on his banjo. It’s understated petty vindictiveness, shot predatorily. If this cruelty wasn’t enough, this is doubled down when Rose feels so insecure about performing that she simply refuses to play. Only for Phil to make an entrance and whistle the piece she was trying to play to rile her. Unconscionable cruelty, brilliantly performed.

Notable Characters:
**heavy spoilers**
Peter is positioned as a helpless victim. He is frail, gaunt and delicate, a herbivore on the plains. Except he isn’t. From his introduction, his sensitivity is evident but it’s only once Phil starts to get to know Peter that we glean conflicting information which doesn’t line up with the meagre figure we’ve been presented with. As the film progresses, the tension beneath the surface starts to rise; there’s an initial visual parallel between Peter catching rabbits and Peter himself stumbling into Phil’s hidden den (a shrine to his repressed desires) but even this is deceptive. The film leads us to believe Peter is the rabbit but we are reminded that Peter may appear soft but happily killed said rabbit to practice dissection. Suddenly the tables seem to turn and the more Phil starts to see Bronco Henry in Peter, the more it becomes a question of who is entrapping whom. No longer is this some powerless boy who should be wary of the tough rancher, we are essentially reintroduced to a young man who likely killed his father and will kill Phil to protect his mother’s sanity. The best example of this is the juxtaposition between Peter mercy killing a rabbit with a broken leg – stroking the animal to extend a moment of tenderness before the end – and Peter offering the cigarette to Phil as anthrax courses through his system.

Highlighted Quote:
“He’s just a man, Peter. Only another man”

In A Few Words:
“A profound, creeping character study brought to life by actors at the top of their game, but likely a little too leaden for most” 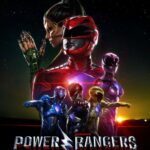 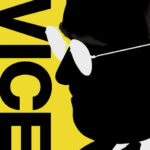