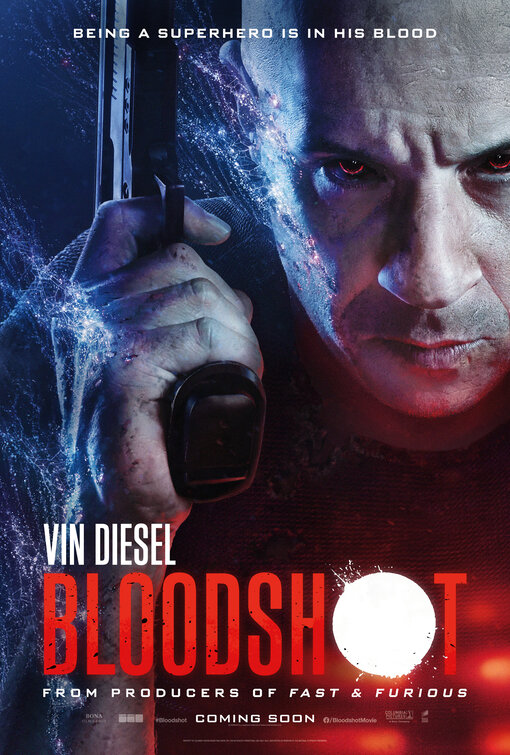 You Don’t Need A Past To Have A Future

Based on the Valiant comic of the same name, Bloodshot is the story of US Marine Ray Garrison [Diesel] whose last mission ended successfully but resulted in a backlash from mercenaries led by Martin Axe (played by Toby Kebbell) that culminated in the capture and execution of his wife Gina. Swearing revenge on Axe and all involved, Ray explains that they might as well kill him now. Uncharacteristically for cinema, Axe agrees and puts a bullet in Ray’s head. Ray then wakes up at the Rising Spirit Tech (RST) facility and is introduced to Dr Emil Harting [Pearce] and fellow military official KT [Gonzalez]. Ray quickly learns that he is the first solider successfully revived by Harting’s revolutionary nanotechnology and in the process has become a much more efficient killing machine. Slowly coming to terms with what he’s being told, Ray starts to have flashbacks to his murder and sets out to get revenge. I’d like to leave it there but the plot hinges on the reveal (which is outlined in the trailer) that Ray’s memory is being tampered with and the identity of Axe is reassigned to whomever RST wants killed. I decided to mention it here as it will come up repeatedly throughout this review.

For a directorial debut, David S.F. Wilson has crafted a completely middle-of-the-road functional film. It has all the trappings of a generic blockbuster, which is actually a strangely impressive thing as so many other directors have had to work up to this level of mediocrity. The most frustrating thing about this feature is what can only be described as music video filmmaking: absolutely stunning visual sequences sewn together with flat expository scenes. Admittedly, I think Wilson’s background is visual effects rather than music videos but the sentiment still stands. Before we get on to the visuals, we need to talk about the sound which ranges wildly from perfectly serviceable to painfully inept. On the one hand, the sound design and score works pleasantly enough but it is certainly one of Jablonsky’s weaker efforts. On the other hand, some of the vocal sound mixing is truly atrocious. Whether off-screen deliveries that sound like they were recorded in a booth or ADR for what I can only assume is a European actor being dubbed by an American, there were some truly poor choices made.

As for the visuals, they largely hold up and feel pretty inventive at times – as one would expect from someone who has worked in that field. The action is actually quite unique, often utilising smoke elements from gas grenades to a haze of flour to interesting effect but a lot of it is lost by erratic over-cut editing (but more on that in my highlighted scene). It also doesn’t help that notable global locations are substituted for wherever they happened to be filming and it’s painfully apparent. One scene in particular takes place in the heart of London but within a few moments, the fight/chase rips through a fairly small city that blatantly isn’t even Britain from things like licence plates. Again, for someone who comes from a visual effects background, you feel like these little oddities would have been addressed. Unfortunately, while failing to pick up on the little things, the film also fails with the big stuff. The climactic finale is a three-way fight down the side of a skyscraper and while a great deal of the movie integrates its effects pleasingly, a significant portion of this brawl is entirely populated with rubbery CGI body doubles that stick out like a sore thumb.

Which brings us to the performances. Knowing the comics, Vin Diesel is, to put it politely, an unfortunate choice to play this role. To give him full credit, he is undeniably invested and this character feels a little broader than his usual Fast/Furious fare but if you walked into the middle of this movie, you would have a hard time identifying whether this was a separate property or not. The second Ray arrives back on US soil he removes his camo to reveal a Dominic Torreto cosplay vest underneath. And considering Hobbs & Shaw introduced genetically modified super soldiers, you’d be forgiven for thinking this was a Dom spin-off feature. In truth, this overall lack of unique identifiers that make Ray stand out as a new or distinct character to anything Diesel has done outside of Groot or Riddick leaves the entire feature feeling strangely forgettable. It doesn’t help that the supports shift wildly between exceptional actors in uninspired roles to mediocre actors in painfully unfunny roles. On the one hand we have Guy Pearce selling the whole “good guy bad guy” bit well, as does Toby Kebbell, while on the other there are the underdeveloped fellow mercs who are either noble allies or twisted unhinged killers; which could arguably work if it wasn’t for the fact that nobody has much of a fleshed-out backstory to justify their actions. Finally we have the comic relief and my God are they insufferably one dimensional but I’ll expand on my thoughts about this in my highlighted character section below.

In closing, this film isn’t as much of a misfire as The Mummy – Universal’s attempt to kick of the “Dark Universe” – but it’s not far off. Taking an established, successful property and bringing it to the cinema as a relatively flat story with an ill suiting lead in an attempt to create an Iron Man world building effect seems to be a bit of a growing trend but as Valiant have a decent run of genuinely fascinating stories, this is a crushing defeat at the first hurdle. Without a unique look or feel, all that we’re left with is generic action and forgettable characters in a film that goes nowhere and upon closer inspection is littered with plot holes; the biggest of which are Ray’s memories. We learn that Ray is subjected to a constantly altered version of his execution but it transpires that none of it is real. But rather than asking the big questions, (i.e. “was he even in the military?”) the plot doesn’t even think to address anything complicated, favouring run of the mill developments. In that way, there is an air of Gemini Man to it and like that movie, I doubt anyone will be talking about this in six months’ time.

The Scene To Look Out For:
To emphasise a point made earlier, there are some undeniably pretty shots in this film. One key example is Katie’s underwater dance (yes, that is a stupid sentence and I have no idea what that has to do with being a Navy seal) which is shot commendably but is utterly butchered and lost in crappy editing. As much as this movie had the potential to be interesting, part of the reason it isn’t is the erratic, disorientating cuts present throughout.

Notable Characters:
To lighten the mood of this dour release, the story decides to introduce a comic relief character roughly an hour into the film. That relief is in the form of programmer Wilfred Wigans played by Lamorne Morris. It is entirely possible that this character could have been given significantly better dialogue and the character itself would have work but as it stands, he’s just painfully annoying. This isn’t helped when it’s made apparent that his counterpart/adversary is Harting’s programmer Eric (played by Siddharth Dhananjay) whose immaturity feels straight out of Silicon Valley. Both end up being severely irritating which culminates in a dull coding hacking type-off, wherein neither actor is given any chance to shine outside of typing fast.

Highlighted Quote:
“No one wants to make real decisions anymore, they just want to think they have”

In A Few Words:
“Dull, bland and ultimately lifeless”