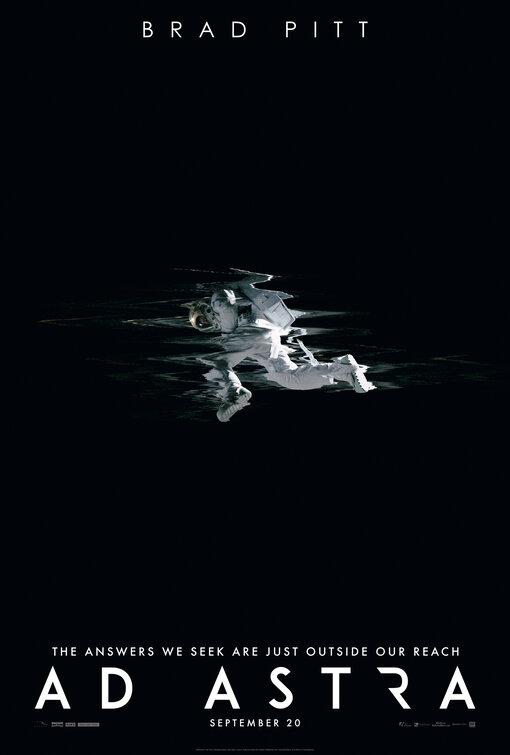 The Answers We Seek Are Just Outside Our Reach

In the near future, Earth is bombarded with a surge that briefly knocks out all power and creates chaos. Astronaut Roy McBride [Pitt] is charged by SpaceCon to travel to Mars, via a base on the moon, to send a long-range message to the outer edges of the solar system. It is their belief that McBride’s father, legendary astronaut H. Clifford McBride [Jones], who went missing around Neptune decades prior, is in fact alive and could hold the answer to what is causing these surges and to ultimately stop them.

With Ad Astra, Gray continues his glacial, measured 1970s style direction and pacing from The Lost City Of Z; finding a middle ground between the approaches of Terrence Malick and Andrei Tarkovsky. The story itself is an example of the best kind of science fiction, a simple tale that could just as easily have been set several hundred years in the past about an arctic expedition, terrifyingly grounded pioneer horror where the only threats are the elements and the limits of our own sanity.

On a technical level, there is a lot to compliment. The visuals are bold and incredibly striking, the production design has that magnificent credibility and Hoyte Van Hoytema’s cinematography is frankly gorgeous. And over all of this observable splendour is this grand and chilling score from Max Richter, full of brass and presence and foreboding.

The entirety of this film rests on Pitt’s shoulders and he carries this burden with remarkable ease. As the emotionally distant and controlled Roy McBride, Pitt gives a subtle, disciplined and understated performance; everything is conveyed in micro-expressions and finely spun from an actor in complete immersion with a character. Furthermore, the periodic psych evaluations are a nice device for allowing the character to offer another level of introspection, other than the narration alone. Admittedly, without subplots or a continual supporting character, the tension is false and manufactured but that reality never truly dawns on the audience because we want to see how Roy’s story will end, we want him to succeed – whatever that success is.

The ponderous, self-analytical complexities of this film will no doubt be construed as pretentious or even dull but while I can understand the logic behind such critiques, I would say they are largely unfounded – or harshly cast at the very least. Over the last decade, we have witnessed some truly distinct directors in the form of people like Denis Villeneuve, Jeff Nichols and James Gray, all of whom are bringing back a much needed tempered, creeping confidence and originality to big screen science fiction features.

Unlike the bleak outlook of Joseph Conrad’s Heart of Darkness, Ad Astra offers an amazing message that for all of its beauty and majesty, space is not our home, Earth is. And we should do everything we can to savour and protect it. In that, I found Ad Astra gave me the high-brow philosophical intensity and emotional resonance that I wanted from Interstellar and while I will happily confess that Interstellar is still a fantastic (but flawed) release with some truly unforgettable imagery, Ad Astra is its more mature younger brother who delivers the impactful payoff that I craved.

The Scene To Look Out For:
**spoilers within**
When the two McBrides finally reunite, there is a marvellously crushing distant sterility between them, as well as a mirrored stubbornness that has cursed them both with the madness of obsession and exploration. It’s always difficult when portraying a character that others spend the majority of a film’s runtime discussing and pondering on but Jones delivers pleasingly when the spotlight is cast on him.

Notable Characters:
Much like booster rockets that break off from the main vessel, the supporting cast are solely there to push Roy further on his journey. They do not take it with him but they facilitate him along the way. Frustratingly, those that we do see are a little two dimensional because Pitt cares so little for them but if there was one individual I would have liked to seen develop further, it would be the overseer of the Mars facility played by Ruth Negga. The minor revelations that she brings to the lead give us just a hint of something bigger that I would have liked more of.

Highlighted Quote:
“I’ve been trained to compartmentalise, seems to me that’s how I approach my life”