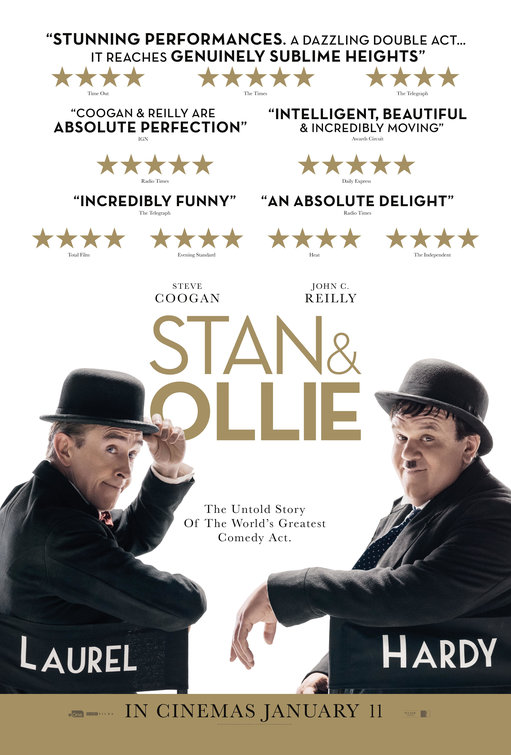 The Untold Story Of The World’s Greatest Comedy Act

Decades after the height of their success, Stan Laurel [Coogan] and Oliver Hardy [Reilly] have reunited to perform on stage in Britain while a producer secures funds for a feature film about Robin Hood. The quaint accommodation, middling crowds and rundown venues are a far throw from what they have been used to and their impresario, Bernard Delfont [Jones] is offering very little assistance, distracted by more lucrative clientele like Norman Wisdom. As the tour continues, we get a look into the cause of the fracture between the two artists, which exasperates with the arrival of the comic duo’s wives.

As with all biopics, this film is driven by its central performances and while Coogan and Reilly may not immediately jump to mind when thinking of ideal casting, they prove themselves quintessential. Offering an effortless, human portrayal of the personas and chemistry that people associate with the comedy duo but also delving into the mind-set of any creative partnership and the complications that sprout from clashing egos and lopsided behind-the-scenes workloads. More than that, there is a true on-screen revelry as Coogan and Reilly perfectly mimic the stylings and routines of Laurel and Hardy. But it should be noted, for all the exceptional recreations, sometimes it is at the expense of narrative content, leaving many of the routines feeling like padding or filer. As a comparison, Bohemian Rhapsody is full of amazing simulacra but audience fatigue with lip-synched covers can set in followed by the realisation that the story isn’t exactly being pushed forward by yet another (admittedly well-acted) bit. With such a keen and narrow focus on two powerful lead performances, supporting actors almost always fall by the side of the road but to quote the film, “two double-acts for the price of one.” The three other characters rounding out the main cast are Laurel and Hardy’s respective wives and their tour manager. Starting with the latter, Rufus Jones does a wonderful job of playing this semi-bullish, painfully cringe-worthy producer dancing that fine line between sycophancy and self-serving opportunism and it’s frankly marvellous. Then we have Shirley Henderson as Lucille Hardy and Nina Arianda as Ida Kitaeva Laurel, both of whom are fiercely protective of their husbands as well as equally pleasing caricatures as their husbands. Ida and her various eccentricities, especially, was extremely entertaining.

From a technical standpoint, the film is very capable. The direction, editing and production design are all praiseworthy and although the score is a touch straight and safe, it hardly detracts from the overall experience and, in truth, would likely be the ideal accompaniment for this kind of feel-good feature, for a lot of audience members. I will say, however, that the hair and makeup, including the prosthetic work, was incredibly good. It seems there has been a notable shift over the last few years, long gone are some of the more painfully dated effects and in their place are high quality seamless transformative appendages and suits.

For all the praise I can bestow upon the practical accomplishments, the overall impact is surprisingly tepid. Rather than a full account of the working relationship between two comedians, we are treated to a snapshot story, laced with a few brief flashbacks to better days and the rift that formed between Laurel and Hardy over a contract dispute. In doing so, we are given an entirely pleasant treatment that is given an inoffensive soft touch that lacks intricacy or detail. And for anyone who would contest this by highlighting the runtime of a film or audience separation from the subject matter, I would point to Chaplin which charts the entire course of Charlie Chaplin’s career while openly highlighting the unknown elements and effectively translating for a modern audience. But this isn’t to say that this film is in any way unworthy. Despite the gentle approach, it is no less immersive or captivating, generating something that is beautifully tragic at times. Case in point, the film closes with an incredibly ill Oliver Hardy pushing him and his partner into one of their most iconic dance routines to end their show. Physically demanding, Laurel’s face is racked with concern but Hardy insists and the final sequence is a wondrous, painful sight to behold. Sure, a lot of audience members will find this film boring or slow but for that perfect demographic, this film will thrill.

The Scene To Look Out For:
**spoilers within**
Other than that aforementioned dance sequence, there was another wonderful, cutting moment when Stan reveals to Ollie that the picture deal has fallen through and Ollie confesses that he already knew. In that moment of transparency, Stan is briefly taken aback and asks if he knew, why would Ollie keep asking about the script and rehearsing scenes, to which he replies that Stan was writing them and it’s what they do. As heart-breaking as it is uplifting, it embodies everything you need to know about these two individuals.

Notable Characters:
Something I picked up on was the laudable levels of diversity in the supports. Whenever we look back to the past, it is through a very caucasian prism, both in terms of perspective and presence. Subsequently, reminding people that post war Britain saw a huge boom in different ethnicities, was a genuinely appreciated addition.

Highlighted Quote:
“It’s moments like this that make me love this industry. Madness. Beautiful madness”

In A Few Words:
“A simple, loving celebration”