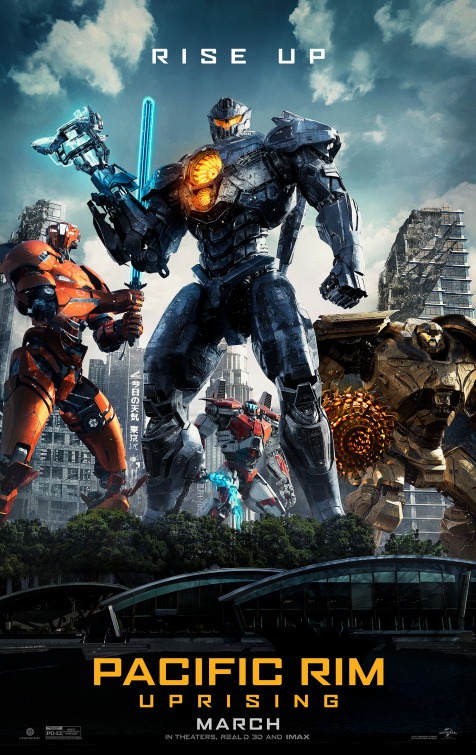 Ten years after the events in Pacific Rim, the world is still rebuilding in the wake of the constant attacks from kaiju – gargantuan creatures sent through portals on the ocean floor. Jaegers (giant robots piloted by two individuals) have little purpose but the market for parts is a booming underground industry. One such opportunist is Jake Pentecost [Boyega], son of the war hero depicted in the first film and after getting arrested in a rogue mech-suit (constructed by war orphan Amara [Spaeny]), his only way out of a prison sentence is to re-enlist with the jaeger pilot programme, training young cadets. Returning to the shatterdome base, Jake doesn’t want to be there and few seem to want him there. While completing a simple PR assignment in Sydney, Jake and his co-pilot, Nate Lambert [Eastwood], are attacked by an advanced jaeger, kicking off an investigation into automated drone mechs, the future of the jaeger programme and a new threat.

I closed my Pacific Rim review by stating that “in the hands of anyone else, this film would be a hollow, schlocky mess.” I wouldn’t say that prophecy has come to pass but it has highlighted the importance of Guillermo del Toro’s eye and how much Uprising misses his visual flare. Having said that, I can’t downplay the very strong, pleasing narrative concept. As a natural progression, the story continues in a logical manner, illustrating that even when we achieve victory over an aggressor, a human contingent will always be there to derail any form of steady flowing harmony. This also comfortably leads to the open possibilities and potential for future films but there was distinctly more world-building in the original (through characters like Hannibal Chau and the kaiju black market) which is missing here, even with the nods to the indication of rogue jaegers being constructed. I also need to concede that even though the catalyst for the story is one of gratifying brilliance, it becomes very reliant upon Charlie Day and, without saying too much, I don’t think he’s up to the task; at least not with this script. That’s not to say he doesn’t perform admirably, more that the way he is utilised to further the story could have benefited from some revision and honing.

Speaking of acting, there are several points we need to address; technically, there are two ways one could interpret the characters as cast. The first is a cynical marketing ploy to entice foreign markets with a wider presence of ethnicities, especially as Legendary has recently been purchased by Chinese conglomerate, Wanda and the first Pacific Rim performed decently in Asia. The second, which mirrors my own, is a celebration of diversity with a broad range of cast members from different countries with a smattering of different languages throughout. I imagine the truth is probably a middle-ground between those two polar examples but anyone kicking up a fuss for more female cast members or non-western actors needs to get on board with how the face of cinema is changing. I will acknowledge, however, that the absence of Hunnam’s character is very weird. And I don’t just mean because he’s not in the film but he’s only mentioned once in a motivational speech. There’s even a wall of fallen heroes and he’s not on it, which implies he’s arguably still alive. But I will admit that I didn’t particularly like the Raleigh Becket character and to have him come in, even as a support, might add a white saviour element that nobody wants. Taking a fairly different direction from the last, a lot of the film revels and draws on the charm and levity that including someone like John Boyega brings. A lot of the po-faced dourness is dropped and instead we have a light-hearted flippancy through Jake, highlighting the difference between him and his father. On top of that, there’s also genuine and enjoyable chemistry between Boyega/Eastwood and Boyega/Spaeny. With that being said, there is one character that is cryptically pointless. Whether whittled down from a larger script or simply an ill-conceived running gag, Jake and Nate seem to have both a history and a shared affection for a fellow officer, Jules Reyes played by Adria Arjona. This creates a minor love triangle but it literally doesn’t go anywhere and is referenced fleetingly.

Being a film heavily reliant upon style, a great deal of work has gone into the technical aspects. While a lot of them have been inherited from the universe established in the first film, the new mech designs in particular showed a nice range and was therefore quite easy to tell apart during combat. But while the mechs were wonderful, the kaiju designs suffer and are very forgettable. With del Toro in charge, it was very apparent that the monsters were given as much reverence and prominence as the mechanised humanoid warriors. I will, however, laud the mega kaiju, which was both a decent design and great genre progression but that could be because the individual kaiju were so flat by comparison. A final note on the technical aspects, there were two elements that left the film lacking: the music and the direction. Lorne Balfe does an estimable job replicating the style and themes competently but never surpasses it; equally, DeKnight improves on some of the issues with the first film (transitioning to mostly daytime fights was a nice choice and greatly appreciated) but suffers from an almost TV style direction. A lot of the aesthetics are present and the fights are clearly choreographed but as with Annihilation benefiting from a bigger screen, I think Uprising might actually work a touch better on a small one, if only for the extreme close-ups with such strong depths of field, leading to the whole thing feeling a little too close and claustrophobic at times. Not all the time but often enough to be an issue.

Sequels almost always attempt to escalate everything but Uprising feels like it’s constantly lagging and one step behind. During the feature itself, I enjoyed myself and left with a sense of positivity but the more I think back on it, the more certain factors irk me and it simply fades from memory with far too much ease. That being said, as with its predecessor, this film is still infinitely better than all of the Transformers sequels combined. The pacing is reasonable, it doesn’t outstay its welcome, it doesn’t take itself too seriously, the action is clear and entertaining, the characters are concise and understandable, having arcs and history and the world lives and breathes as both a recognisable and credible one, giving plausibility and weight to the more fantastica components. In essence, this film is a spectacle piece, little more. If you are happy taking it at that value, you will probably enjoy it for what it is.

The Scene To Look Out For:
**spoiler heavy paragraph**
I mostly use this section to highlight something exemplary, a scene that stood out as memorable in a positive way. On occasion, however, I use it to illustrate a part of the film that was extremely disappointing. In this case, it’s the final fight; not the fight itself, which is bombastic and entertaining, but the final resolve and how quickly everything races to close. The mega-kaiju clambers up Mount Fuji (which is ludicrously close to Tokyo allegedly) and while it prepares to.. attack it.. release spores? I dunno, it’s never made clear what its objective is outside of terraforming. Anyway, the thing is climbing Fuji and Jake’s jaeger is plummeting to the earth, in the hope of wiping it out and the second it does, there’s some brief levity, followed by a snowball fight and that’s it, film over. Roll credits, brief sequel opener scene and we’re done. For a film that paced itself so reasonably, it’s such a bizarre move to wrap it up so quickly but admittedly, the first film did the same thing, so it probably feels fitting for the series.

Notable Characters:
**another spoiler heavy paragraph**
Earlier I mentioned the film relied too heavily on Charlie Day. This was not meant to discredit his acting abilities as he is fine but the major twist of the film (a fairly decent one if you ask me) is that Day’s character Newt has been coerced and corrupted from drifting with the kaiju brain shown in the first film. This, however, elevates him from comedic support to primary adversary and much like elevating Jack Sparrow to lead character, it mostly works but feels like a poor fit that doesn’t play to the actor’s strengths and range – at least not in the character presented in this script.

Highlighted Quote:
“That was supposed to be epic.. but it wasn’t”

In A Few Words:
“A perfectly capable release but one which lacks the magic that made the first the passable affair that it was” 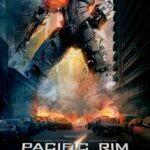 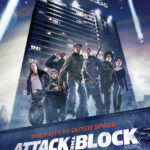