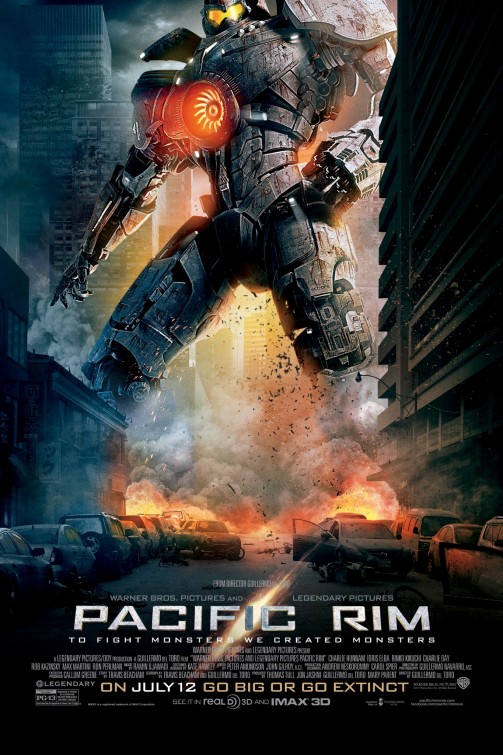 Pacific Rim opens with a rather interesting coverage of the first few chapters of an alien invasion. Rather than simply starting the film and covering the first contact, we’re treated to an introductory montage that highlights mankind’s first victories over the lumbering alien beasts (referred to as kaiju) and the gigantic human piloted robots (jaegars) used to defeat them. After the first battles mankind did what it always does and underestimates the situation, elevating the jaegar pilots to celebrity status and reducing the kaiju to an almost farcical threat. Then the resistance started failing; the kaiju were bigger and more aggressive, taking down jaegars with ease. From here on it became obvious that the attacks would not stop. Disappearing for five years after the death of his brother and co-pilot, Raleigh Becket [Hunnam] is sought out by the marshal in charge of the jaegar program, Stacker Pentecost [Elba], to re-enlist and be part of humanity’s last stand against the invading horde.

From the start of his career Quentin Tarantino drew on 70’s pulp and exploitation films for inspiration but as his success grew, he began to flat-out replicate them (think Kill Bill onwards). While any genre in the hands of a masterful director can be significantly elevated, it still carries with it a great deal of flaws disguised as traits. Del Toro’s films are no different. His love of fantasy, insects, comics and anime has always been present in his work but this is a complete replication of Japanese Mechs vs. Monsters at its finest and Asian cinema can be very different from Western cinema, leading to cliché dialogue, random flashbacks and convenient plot reveals. Being a fan of anime and certain 60’s monster films, I really enjoyed this release. It was an exceptional amount of fun that really incorporated Del Toro’s “If I were 12 I would love this” mantra. Having said that, as a critic I have to acknowledge that this movie is far from perfect.

On a technical level, Pacific Rim is a modern marvel. The visuals – in terms of effects, production design and cinematography – are absolutely flawless and simply superb. Being able to see every detail in a world that felt completely alive and plausible is exactly what was required, rather than a myriad of disorientating, over-the-top quick-cuts favoured by Guillermo Navarro and of course, Del Toro himself. The scale is also wonderfully nailed, and even when the jaegars are fighting the kaiju in the middle of the ocean, the sense of enormity is never in question. These beings and the mechanical units we have constructed feel simply colossal. Outside of that, things tend to get a little trickier. I find Ramin Djawadi a very divisive composer. Sometimes he creates really epic, iconic scores (notably Prison Break, Iron Man and Game Of Thrones) but most of the time, they lack that memorable tone that really amplifies the entire film. While achieving that big, adventurous, upbeat feel, there’s a sense that Djawadi is somehow holding back. So you sit and wait for the triumphant finish and it never really arrives.

As previously stated, this is a love letter to a very specific style of filmmaking and really Del Toro is aiming to introduce something he loves to a new generation. However, in doing this, he’s introduced everything! For those unfamiliar, a lot of kaiju/anime releases have a very specific set of character archetypes, most of which are present in this film – everything bar the cutesy girl who’s a bit useless and cries a lot.. possibly with a pet that may or may not talk. There’s also the unorthodox construction of character names such as Stacker Pentecost, Newton Geiszler and Hannibal Chau, which you really wouldn’t expect anywhere else. Additionally, we have the unconventional love story that doesn’t really feel necessary, the use of the ultra-super weapon near the end of the fight when it would have been better to lead with it at the start and characters fighting amongst themselves then working together really quickly to achieve something positive. At one point, a character even shouts “This is for my family!” in Japanese before attacking and if you’re going for cliché, that’s pretty high on the list. I appreciate these could be attributed to any film, made in any country but the way in which they’re shot, acted and presented is very much akin to Japanese cinema. For those who aren’t familiar with these quirks, they simply come off as silly implausible setups. Imagine trying to recreate a Sergio Leone spaghetti western for an audience who was unfamiliar with them. All the close-ups, the two-three minute cuts, the audio dubbing and the seemingly never-ending suspense would come off as ridiculous. Which puts me in a difficult place. How do I review the film from a point of neutrality? While I’m familiar with the anime homages, does the rather laughable dialogue, obscure plot developments and fairly flimsy story cause the film to suffer? Arguably, no. Despite the fact that any other release would be penalised for these elements, they are executed as a loving recreation and as such, are done well. One could say “Giant robots fighting stuff? Shaky dialogue and acting? Surely it’s just like Transformers?” So, to pre-emptively combat that statement, let’s just clear a few things up. Del Toro is selling robots beating up monsters, not sex and racism. One of the reasons this film works so well is the passion and love for creature features of the past that has been infused into every single element. Should Del Toro have made this film? Of course not, it’s absurd. But in making this film he has managed to capture and present his unabashed love for these types of films and simply asked you to take a look, see if you could like them too. It’s a very a silly premise told by someone who is an astounding visual filmmaker; a mindset which is not to be confused with the makers of Sharktopus Vs. Crocageddonosaurus or some other bollocks mockbuster, which is a silly premise told by a silly person.

The Scene To Look Out For:
This movie prides itself on the visual fight sequences and this is one of the main points raised by its detractors. However, most will agree that a rather standout moment is a surprisingly tender one. A flashback by jaegar pilot Mako Mori [Kikuchi] reliving a close encounter she had with a kaiju as a child (brilliantly acted by Mana Ashida) and the pilot who saved her life. I’m not saying any more than that but anyone who’s seen the film knows what I’m talking about.

Notable Characters:
My fiancée and I are massive Idris Elba fans. Everything he’s in usually has to be sampled as he’s an incredibly talented individual and the roles he ends up in are compellingly done. His portrayal of Stacker Pentecost is no exception. I had heard that originally Tom Cruise was considered for the role and I cannot think of a worse choice. Elba’s calm demeanour and stoic nature towers over his fellow cast members, resonating a real sense of superiority. The whole thing reminded me of Col. Shikishima in Akira. Outside of that, Ron Perlman’s turn as Hannibal Chau is so out of a manga/anime (in terms of visuals, mannerisms and characteristics) that his presence strikes a very memorable cord.

In A Few Words:
“In the hands of anyone else, this film would be a hollow, schlocky mess. But Del Toro lovingly recreates an enormous part of his childhood for contemporary audiences. Big, fun and exciting but possibly a little too loyal to the tropes of the inspirational material” 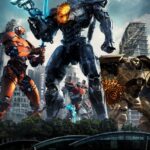