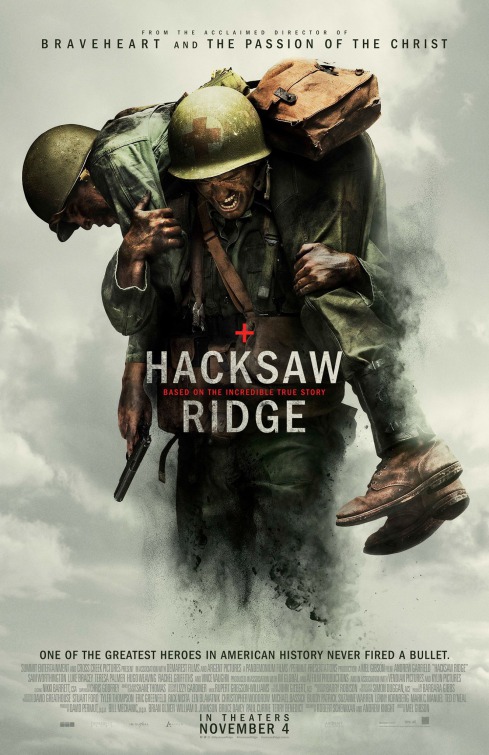 At the start of Hacksaw Ridge, we are introduced to Desmond Doss [Garfield], son of a cantankerous World War I veteran [Weaving], and shown a handful of formative events that led him to closely follow the counsel of his Bible and refrain from violent acts at all times. One day having brought a young man to hospital, Doss meets a young nurse, Dorothy Schutte [Palmer] and the two start an admittedly awkward relationship; largely due to Doss’ sincerity and inexperience. As happened to everyone in the 1940’s, war interrupts any plans they have and despite his convictions, Doss enlists as a pacifist, hoping to serve his country as a medic but refuses to even touch a weapon. This immediately riles his commanding officer, Captain Glover [Worthington], who sees him as a liability to the unit and sure enough, the rest of the men start to resent Doss for not simply dropping out; stoked by the goading of natural-born soldier Smitty Riker [Bracey]. As Doss stands by his beliefs, he is brought before a tribunal to see if he is allowed to serve or whether he will spend time in a military prison. Usually I’d stop there but from the poster and trailers you can tell he gets to serve, despite never carrying a single weapon to protect himself.

Regardless of what you may think of the man, Mel Gibson is an exceptionally talented director and helming a production after an eleven year absence was going to either herald a triumphant return or kill his career for good. As it so happens, Hacksaw Ridge is a wonderfully crafted movie and cements the quality Gibson is capable of producing. More than the plot and narrative structure, the themes and performances take centre stage. As such, the key message, that war is murder on a huge scale and ethically unforgivable, had a bit of an uphill battle to not come off as exceptionally preachy or simply the actions of a religious fanatic. Frankly, I feel the question of whether his motivation was driven by stubbornness and pride or simply a stronger moral will than most could have been developed further but the actions depicted seem to make that a relatively moot point and the more impressive accomplishment is Garfield’s ability to make Doss an affable individual rather than an irritating zealot.

Having said that, as fantastic as this film is at times, it also happily nose-dives into the pitfalls of every war drama from the last sixty years. The adversary is a faceless two-dimensional opponent with zero humanising development. Other than a few scenes in underground tunnels, the Japanese servicemen are depicted as bloodthirsty savages. Which is the same thing that really hurt Saving Private Ryan and something I thought we were well past thanks to the split depictions shown in Flags Of Our Fathers and Letters From Iwo Jima. The movie also indulges pretty much every war cliché, giving a lack of realism and credibility to the feats on screen; especially as the events depicted, from Doss’ training to his actions in Okinawa seem to take place in the space of a week. And while the merit of dialogue and actions that could only exist in film and an opponent being little more than “the enemy” could be argued, a two act structure cannot. A growing trend of late is to present a film of two halves, with an introductory first hour and an action based second hour. It could be said that Doss’ early years, followed by his training and finally his deployment to Okinawa are the three acts but really the plot feels like everything is broken into developments before and after he arrives in Japan.

As stated earlier, the themes and performances are paramount and Garfield gives one of his best as the innocent, courageous and morally resolute Desmond Doss. A less capable actor would have absolutely butchered this role but Garfield manages to present a believable man not so much beyond corruption but able to rise above weakness and highlight man’s better nature. Obviously there’s going to be a lot of Christ-like metaphors and comparisons going on (especially as this is a Gibson picture) and rightfully so, after all Doss is clearly emulating what he believes to be a positive role model while doing his part for the war effort. Interestingly, despite the aforementioned use of clichés, Hacksaw Ridge’s unique selling point is that it sensationalises the heroism of saving a life rather than taking one, even when it indulges in Smitty’s superhuman abilities. Speaking of Smitty, the supporting cast are a bit of a split bunch. As with all war dramas, there’s never enough time to focus on every platoon member, so you end up with a handful of exaggerated personalities: the cocky one, the card shark, the angry Italian/Irish/Jewish one, the religious one, the hick, the cold bastard etc. This film is no different and as decent as the performances are they never really transcend their simplistic trappings. The three noteworthy portrayals, outside of the lead, come from Hugo Weaving’s tormented alcoholic father, Worthington’s decent if vanilla role as Doss’ commanding officer and Vince Vaughn’s attempt to embody the stereotypical shrieking drill sergeant while exuding enough charm for us not to hate him. I would like to elaborate on Teresa Palmer’s role but after her introduction she fades more-and-more into irrelevance, which is regrettable as she started off as an incredibly strong and captivating individual before falling into the standard role of the nerve-wracked doting partner.

Being a period piece, the production value is outstanding, taking care and effort to recreate Doss’ humble life in rural Virginia and the battered, scorched earth of Okinawa. But the real standout of feature is the creative direction and cinematography utilised throughout which depicts how graphically brutal and genuinely terrifying this conflict must have been. What boils down to a rather small scale setting (maybe a handful of key locations) is elevated by the exceptional camera work and interesting flare on display, giving everything a grander scope and status. The minimal use of CGI is also extremely welcome, making for a very real and visceral finished production. All of which is complimented by Rupert Gregson-Williams’ bold score, that relies on the somewhat expected militaristic bugles and drums but also adds a unique contemporary touch to ensure it stands out from the usual fare.

On paper there isn’t a great deal about Hacksaw Ridge that singles it out as special but the culmination of a solid script, a talented director, great production design and superb performances ensure it’s a credible movie; more than that, it channels an insane amount of (some would say old fashioned) heart, earnestness and hope that it stands out from the gritty despondence of other releases. And just when you think the film is being a bit naïve and rewriting history, it solidifies its stance with excerpts of interviews with the real-life counterparts. Well played, Hacksaw Ridge.

The Scene To Look Out For:
As the many award nominations confirm, this film is pretty much carried on the back of Andrew Garfield’s performance; subsequently there aren’t many scenes where he isn’t front and centre. But Weaving’s character, Thomas Doss, is interesting if only for the contemporary parallel to Vietnam, Korean and Gulf War veterans and how the conflicts in Iraq and Afghanistan are still very much in the public conscious and treated with a wary fatigue rather than as a glorious victory. As such the crushing sense of loss and displacement Thomas expresses is compelling and reluctantly forcing his way into the tribunal dressed in the Great War uniform he came to despise was a pretty subtle but powerful moment.

Notable Characters:
**Spoilers within**
One support I was very surprised with was Desmond’s brother, Hal. The opening of the film focuses on the relationship between the two brothers, depicting a scrap that gets out of hand when Desmond grabs a brick and clocks his sibling. This action shakes him to the core and starts him down the path of non-violence. This relationship is brought up again when Hal enlists into the army, against the explicit instructions of his father and then he’s never heard from again. Hal Doss does his duty, serves.. wherever and whether he lives or dies is completely ignored. The only thing I could report is that the real-life counterpart was interviewed at the end of the film, so obviously he didn’t die during the war but that’s about it. Very odd. Not sure if it’s a product of a cut scene or two or just an underwritten character but it certainly sticks out.

Highlighted Quote:
“It’s not about what you joined up for, it’s about the lives of every man here. And yours, son”

In A Few Words:
“Despite ticking off every cliché going, Hacksaw Ridge rises above the sum of its parts and presents an incredibly heartfelt and inspiring drama”