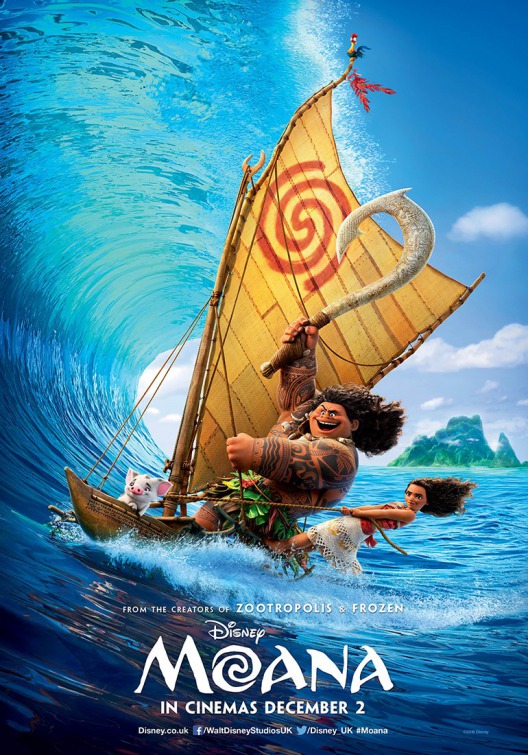 The Ocean Is Calling

Set on an island in the South Pacific, we are introduced to Moana Waialiki [Cravalho], the chieftain’s daughter and future ruler of Motunui. Her eccentric grandmother raises her with stories of gods and legends beyond the reef, while her father insists she focus on preparing to rule over the village. The older Moana grows, the more tenacious she becomes and while she obliges her father’s wishes, she still yearns to explore the sea. Not long into her rule (with her parents acting as advisors), the island is struck by several blights, coconuts turn to ash and the fish no longer return to the reefs. Led by her grandmother’s words, Moana believes this affliction is the result of the demigod Maui [Johnson] who, centuries ago, stole the heart of Te Fiti (the creator) and since then island after island has been consumed by darkness. Thus Moana sets out to find Maui and demand he return the heart of Te Fiti and restore order.

On the surface, Moana is an incredibly straightforward formulaic Disney film that follows the classical hero’s journey. For that, I was relatively underwhelmed with what was achieved. Yet there are so many aspects that, the more I dwell on them, the more I like the direction taken. It’s this combination of eye-rolling Disney tropes and forward thinking that reminded me of releases like Mulan; which I also had difficulty deciding whether it was more wince-inducing appropriation/exploitation or a thoroughly decent and engaging female-led story. The first thing to note is where Disney moves away from its typical fare. There is no specific love story, no romantic interest for Moana, just a sense of devotion to her position as leader. There are also several adversaries but no clear villain, the black-and-white nature of good and evil is put to one side in favour of plentiful shades of grey. And then there’s the journey itself which, as stated, mirrors folk tales, myth and legend in the sense that the hero completes several tasks and trials, growing in the process but eventually returns home stronger for the experience – roles usually reserved for male characters. On the other hand, we still have so many elements that smack of that overbearing Disney tone and a horrendous amount of rewrites: two dimensional supporting characters, anachronistic pop-culture references, endless singing and clunky humour.

Once the film eventually gets going (the establishment of island life and the tribe’s backstory is a bit of an interminable grind) there are two standout characters, Moana and Maui. Everyone outside of that is either two dimensionally drawn, mute or unbearably annoying. Before we get to the leads, let’s discuss the supports. Moana’s parents do little more than support/hinder her advancement as a young woman (as every parent perceivably does in a Disney film – when they’re not dying to drive the story of course) and Tamatoa the giant crab monster is amusingly voiced and written but never menacing enough to instil genuine peril but I’ll expand more on him later. That leaves us with the kooky grandmother, the coconut creatures and the stupid animal sidekicks, all of which I could have done without. Seriously, I cannot convey how much I am done with dumb animals with either human traits or acting like a fucking dog!

But as much as the peripheral players felt bland, the leads excelled wonderfully. Moana is a believably drawn heiress, who doesn’t spend the entire runtime running away from her responsibility, if anything she actively seeks out a resolve and brings her whole village forward, as any good leader should. She is also decently acted by newcomer Cravalho and should resonate with audiences globally. Having said that, naming your daughter Moana (which means ocean in many Polynesian languages) was a stupid move on her parent’s part; if you don’t want to have a daughter fascinated by the sea, maybe don’t name her after it? Then there’s Maui, who should be a cultural minefield with his dancing tattoos, stereotypical rotundness, cowardice and ego but the heart and charm that Johnson exudes is palpable. That’s not to say these issues won’t hit home with many who will feel their culture is being high-jacked, trivialised or commercialised but from a performance point of view, Johnson does an incredible job bringing to life a complex and layered deity.

As with any film with this many animators, the visuals were almost guaranteed to be jaw-dropping. Once you look past the bug-eyed mental disability chicken and the anthropomorphic Abyss-like column of water, the effects are extremely impressive; most notably Moana’s confrontation with Te Kā. The music, on the other hand, I’m unsure about. The songs are pleasing enough and certainly fit the visuals but there’s nothing iconically special about them and likewise, Mark Mancina’s score fits but never reaches the heights of the visuals.

Overall, I enjoyed this movie. There was definite room for improvement but as a fantastical journey of self-discovery and overcoming unconquerable odds, it’s engaging and fun.

The Scene To Look Out For:
For all the talk of Maui’s mischievous ways, his introduction as a vain, egotistical being is amusing. What’s more, the song You’re Welcome is one of the more addictive and subtly serves to cover a wealth of backstory and drive the plot forward with a mix of pleasing visual artwork. But I can’t shake the feeling I had at the end of The Princess And The Frog, which shouldn’t surprise me as it’s the same directors. It’s a pretty decent film but for all the fuss made about cultural sensitivity it makes some really stupid mistakes; as if someone said, you know what I really like? Hercules. Can we do something like that but from a different culture?

Notable Characters:
Tamatoa is easily the funniest thing in this film. A weird hyperactive, narcissistic mythical being with an obsession with the importance of external appearance. But the only reason he works is the hilarious voice work and song performed by Jemaine Clement. Can’t say much more than that without ruining story points but he was amusing. Odd and not necessarily evil but amusing.

Highlighted Quote:
“When you add your own stone, you raise the whole island higher”

In A Few Words:
“At the same time Moana is a shining example of the heights Disney could achieve and a reminder of how little it understands how to progress past its formulaic past”