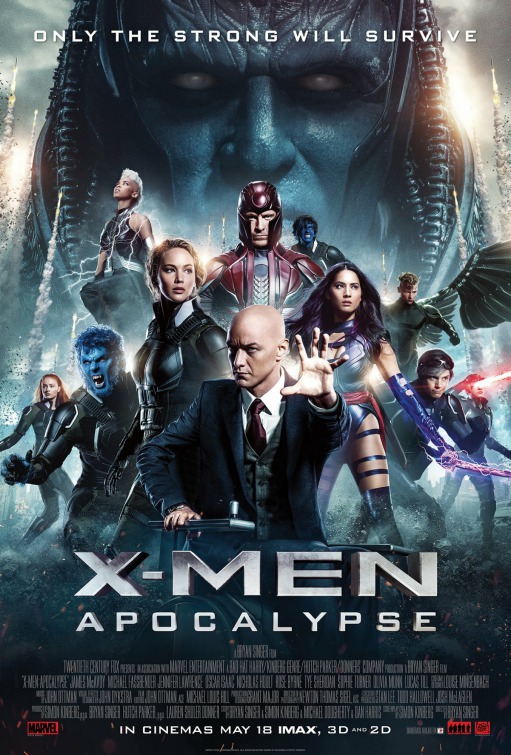 Only The Strong Will Survive

Apocalypse opens with a brief prologue set in ancient Egypt, introducing us to En Sabah Nur [Isaac], an all-powerful mutant with four loyal followers and thousands of devout subjects. During a ritual wherein En Sabah Nur transfers his consciousness to a new host, he is betrayed by humanity and imprisoned under the ruins of a collapsed pyramid. Time hop forward to the 1980s and CIA agent Moira MacTaggert (Rose Byrne returning to the role she filled five years ago) is investigating an underground cult who are worshiping at the site of En Sabah Nur’s body. Through her accidental intervention, the ancient mutant’s transferal process is completed and he wakes to find the world a very different place, with humanity ruling over each other with the constant threat of nuclear attack. Appalled by the state of the world, En Sabah Nur (dubbed Apocalypse, among other titles, by history and legend) sets out to recruit four powerful mutants who will aid him in cleansing the Earth of the weak. Following the events of Days Of Future Past, Professor Xavier’s [McAvoy] school for the gifted is flourishing, Lehnsherr [Fassbender] is living in quiet anonymity in Poland and Mystique [Jennifer Lawrence] is travelling the world, liberating mutants but with the arrival of Apocalypse all of them will be drawn in on one side or another.

As the X-Men cinematic franchise continues, audiences should keep in mind that these prequels/reboots don’t play directly into the first four X-Men releases, they don’t necessarily even tie-up with the Wolverine solo features or the flash forward at the end of Days Of Future Past. These movies are chartering their own course and subsequently things like character introductions and origins may feel familiar but are in fact new iterations. Once you get your head around that, everything works perfectly; if you start saying, “but why doesn’t Cyclops recognise Wolverine in X-Men?” then you’re failing to understand how extensively the time travel aspects of Days Of Future Past reset the narrative.

As mentioned in my Captain America: Civil War review, the nature of superhero franchise means that when it comes to character we break things down to ‘how are the new characters treated’ and ‘do the returning characters bring anything worthwhile to this instalment’? Starting with the veterans, Magneto, Xavier and Mystique continue to represent moral polarity with Charles embodying virtue, Erik driven by bitter self-interest and Raven sitting on the fence and drifting between the two, yet all of them continue to believe they are walking the right path. Until the end of the film, of course and then they just sink into hero and barely anti-hero roles. If I’m honest, Magneto remains the most interesting character in these prequel titles and in Fassbender’s hands carves an exceptional amount of complexity out of the standard villainous role. Admittedly, his motivation is a touch annoying and he’s becoming less and less of an accountable villain as the series progresses but I’ll get back to that later.

Focusing on the new characters, we have new heroes and new bad guys. As far as the heroes are concerned, the kids are decently written and acted. Tye Sheridan’s performance as a cocky young Cyclops is great, as is Kodi Smit-McPhee’s timid but earnest Nightcrawler, Jubilee is annoyingly once again reduced to background fodder but Sophie Turner as Jean Grey was wonderful. If they do intend to revisit the Phoenix storyline (and it’s very apparent they do) I can genuinely see that being extremely enthralling with these current actors. The villains were less pleasing. For all their hyped importance, the four horsemen barely get a look-in, despite being extremely well cast. Olivia Munn plays Psylocke perfectly, Alexandra Shipp gives a better performance in ten minutes as Storm than Halle Berry did in three feature films but Ben Hardy as Angel is, like Jubilee, criminally underused and has no real development. But in all honesty, these three are whittled down to henchmen and add very little to the film. Oscar Isaac gives a good performance as Apocalypse but everything else about his character is a bit unclear. I get his ‘survival of the fittest’ motivation but I couldn’t tell you what his powers were. And while that is a problem that crops up in a lot of ‘powers’ films, it’s something that needs to be established if you’re going to have him threaten the world so thoroughly.

Disappointingly, the production design was decent enough but didn’t really embody the 80’s as well as previous instalments represented their respective decades. You have the general nods in the form of a few odd hairdos and items of clothing but it feels 80’s-lite and you would be forgiven for thinking several scenes were set in the present day. The real indicator of the era is the fucking product placement because even when cities are being reduced to ash billboards will remain perfectly intact – otherwise how would people know the film is set in the past? Furthermore, the use of CGI is really ropey in places with lots of plasticine effects reminiscent of Emmerich disaster films from ten years ago. The problem with all this ‘destruction from a distance’ is that it doesn’t hold any weight. Sure, we have a few close-ups of randos staring in awe but without a death toll the impact is lost. And don’t tell me that cliché war room exposition bullshit covers it because I’m sick of situation room discussions that boil down to ham-fisted lines for those in the audience too dumb to keep up. All that “My God” “That’ll wipe out all human life” “He’s not going to stop” “It would take a miracle” “It’s stopped” “The effects are reversing” crap infuriates me to the core. And the only thing compensating for what should be a spectacular visual treat is John Ottman’s bombastic score doing what it can to emphasise scale and grandeur.

**Spoilers in this paragraph**
While it would be easy to chalk the problems up to the writing, the film’s greatest impediment is its general direction and flow. I have no idea where any of this is going, it just feels like a limping TV series that continues to jump the shark; case in point, the deaths of Havok and the Lehnsherrs, feel less like an opportunity for character growth and more like lazy ‘woman in the fridge’ motivation. I can’t tell you what they are doing with Magneto, is he a murderous terrorist or a playful anti-hero? I like the conflict he feels but at the minute his moral alignment is closer to Wolverine than someone like Apocalypse. Then you have Mystique’s u-turn from her “mutant and proud” speeches from X-Men: First Class; one could argue that she’s just become guarded in the wake of previous events but I think it’s more they don’t know what to do with these characters other than repeat the same arc over-and-over. The key components are in place but the execution doesn’t have enough impact or resonance, leaving the whole thing fairly flat. Maybe the problem is leaping forward by a decade each film to these world ending scenarios. Perhaps what we need is a returning cast who can evolve satisfyingly with a simple conflict that wouldn’t set itself apart, visually, from the others. Having said that, I feel it would be a very unlikely development.

The Scene To Look Out For:
**All spoilers**
We’ve got to talk about the ending. The final/only showdown between Apocalypse and the X-Men exists as a microcosm for every problem with this film. The music pulses wonderfully, the characters undergo emotional strain, the fight is tense and yet, it’s all a bit dull. One second you have a heart-pounding high in the form of a particular revelation or development in the fight and the next you realise that this melee is essentially contained outside one building. Mixing a psychic battlefield with a real-world one is a nice touch but if it wasn’t for the sheer cinematic heft of Jean saving the day by unleashing the Phoenix force, it would have been disappointing. As it stands, it’s just alright; which is not what you need after a two and a half hour build up.

Notable Characters:
**Spoiler comment at the end**
With so many characters jostling for attention and not a lot of them having a rewarding arc from the start to the end of the film, highlighting a character of note isn’t easy. I also find it interesting that despite these massive leaps in time, the crew of this film don’t seem to appreciate how much the human form ages in twenty years; ignoring any curative effects of the mutant gene for a minute, I think Erik and Charles are supposed to be in their early 50s at this point. So instead, I’m just going to talk about a character I’ve glazed over entirely; no, not Beast, he’s still too boring. One of the biggest question marks that hung over Days Of Future Past was how they would handle Quicksilver (played by Evan Peters) and even then we all assumed he would be cooler in Avengers: Age Of Ultron. Interestingly, he turned out to be one of the film’s highlights and the MCU’s Quicksilver was killed off, so the narrative opportunity was presented to give him a much more substantial role – which will only grow in the next feature, judging by the final shots of the film. I have no problem with Peters’ portrayal of the fast-footed mutant but he’s so overpowered that it took a half-battered Apocalypse to stop him. Curiously, having his leg broken could limit how fast he zips around and make him a much more practical character (rather than the deus ex machine that he effectively is) which is good because the humour and levity he injects is greatly appreciated.

Highlighted Quote:
“You can fire your arrows from the tower of Babel but you can never strike God”

In A Few Words:
“A combination of amazing highs and tedious lows produce a weirdly average release which, considering the talent involved, is frankly unacceptable”