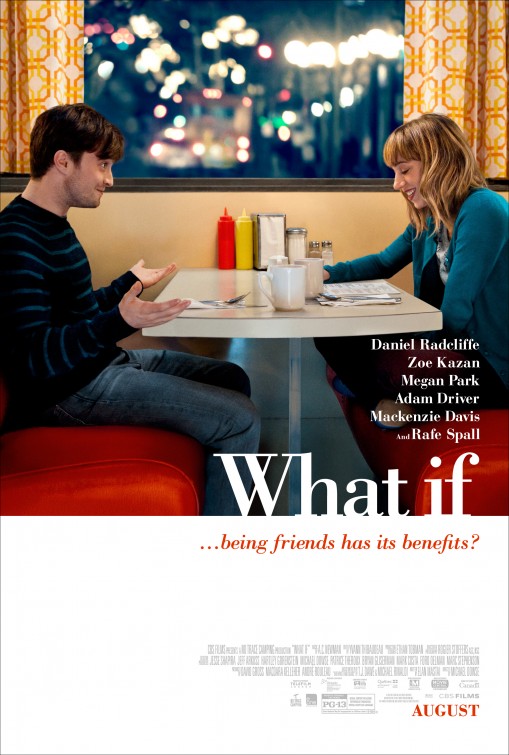 Being Friends Has Its Benefits?

The story opens with an introduction to Wallace [Radcliffe], a young man who has only just got over his break-up one year prior. His best friend is hosting a party and insists Wallace finally shake off the maudlin funk and embrace the single world. Reluctantly, Wallace consents. While at a party, he makes the acquaintance of Chandry [Kazan], a charming twenty-something animator and they immediately hit it off. The night winds down and the two depart, with Wallace offering to walk Chandry home. Upon arrival at Chandry’s residence, she gives Wallace her number, explains that she had a good time but also subtly drops the hint that she has a boyfriend. Wallace, deflated by this, intentionally loses the number and carries on with his life. After some time, the two meet up again and agree to be friends, enjoying one another’s company. As the story progresses it becomes apparent that Wallace obviously has feelings for Chandry and anything she could reciprocate is ignored and buried, as she is in a relationship. Things become even more complicated when her boyfriend Ben’s [Spall] job sends him to Europe for six months.

Let’s be frank with each other, What If is not ground-breaking but it’s honest and the performances are completely credible. For a romantic comedy, that’s an exceptional foundation to start on; not to mention it’s something that most writers forget when they pump out mediocre dross. The story happily plods along without concern of time frame, flittering from genre trope to genre trope, meandering with less of a narrative drive and more an encounter based progression (before you send in emails, yes, there’s a difference). Admittedly, the framework is very formulaic and far from unfamiliar but there’s a large untapped market for quirky girls and bitter guys on-screen having blunt conversations about life and relationships – a fact which seems to have escaped the studio as the original title (The F Word) was altered, despite being better and more precise, to What If because censors were terrified of children seeing a poster with a double entendre.

As with (500) Days Of Summer, we are expected to believe a very bold faced lie: that these two individuals are less than they are. To explain, films can’t just take an honest portrayal of a woman, they have to take a beautiful woman and stick her in an unassuming dress and give her a fringe and say she’s quirky. Well done, you have created the average woman, there is hope for us all, thank you. Again, before you email in with accusations of misogyny, my point is that it’s all the same aspirational marketing, just dressed differently. Equally, we’re supposed to believe that Radcliffe isn’t just a little too short and has a weird grin, that he can pretty much attract any female member of the supporting cast. Nope, that’s not how people work, sorry. So once you sidestep that nonsense, you’re left with the chemistry and these two have it in droves. Wallace and Chandry interact wonderfully with each other, the conversations are delivered with sincere credibility and for brief moments you could happily believe that everything is pretty much ad-libbed. I’ll admit I haven’t seen much of Kazan’s work (outside a few supporting roles) but she’s a more than capable actress and rises above even the dumbest of genre set-ups: “I can’t believe Josh got the job of project lead, that should totally be yours” “Yeah, you’re practically doing all the work” “I turned it down, you guys” “What? But you’re the cutest, most funny, clever, talented but not so cute, funny, clever and talented to be threatening and alienate the audience kinda girl I’ve ever met” “I know, but it’s complicated” … ok, so I embellished a bit there but you see what I’m getting at. Furthermore, I like Radcliffe and here’s why; the guy is more than just a child actor, he’s a genuinely interesting and talented thespian with a keen eye for interesting projects. He’s clearly still searching for that defining role but if you watch a combination of this, A Young Doctor’s Notebook, Kill Your Darlings and the footage from the upcoming Horns, it’s evident he’s more than close. The supports are interesting but used selectively. There’s the best friend who acts as the fast-track relationship juxtaposition, the sister who’s also a single mum and the current boyfriend who isn’t anything bad but clearly doesn’t have the same spark that our two leads do; all of which are delivered well but thankfully also in a tasteful manner.

The direction is very inoffensive but also a little uninventive – too many contemporary comedies rely on dialogue and forget that camera movement and reveals can open up a whole realm of humour. Setting the film in Toronto was also a nice touch, changing things up from the generic US city we’re often stuck with, without waving flags and reminding the audience that this movie is SET IN CANADA! WHODA THUNK!? It’s the equivalent of a British comedy set outside London. I also thought the standard animated cutaways were unnecessary. Yes, I get she’s an animator and it sort of adds something visually interesting to the narrative but not by much and simply felt like it was included because it was expected. Speaking of which, the obligatory soft indie soundtrack also irked me – as it always does. I don’t know who has final call on these things but I’d like to watch an independent romantic comedy that didn’t feel the need to resort to some croaky-voiced, coffee-sipping, fart-sniffing, guitar-strumming arsehat groaning on about shoes in trees and canoes with knees and other adolescent rhymes that are being palmed off as cute or charming. Fuck you, indie music. Fuck you. You are not absolutely necessary, the film would get its message across just as well without you. Now kindly exit the cinema and return only on occasion, sparingly. Please.

Just as action films are inexplicably marketed and ‘intended’ for a male audience, romantic films of aaaany nature, are targeted at women. That’s because there’s this wonderful assumption that men don’t watch these types of films or don’t have these kinds of emotions – which is horseshit. And besides, men have hilarious raunchy comedies, so why would they need romance? No, the raunchy comedy is the knee-jerk reaction which surreptitiously cons men into seeing a romantic film ’cause there will probably be some nudity.. but the stories are largely the same. Personally, I adore gender neutral romantic comedies. Films that are honest and funny without lowering the bar or ham-fistedly pitching to either male or female stereotypes. So, am I saying that What If is as good as (500) Days Of Summer, High Fidelity When Harry Met Sally or Grosse Pointe Blank? No. But it’s definitely as good as Nick And Norah’s Infinite Playlist and so much better than the stunningly overrated Juno. So, leave your aspersions and prejudices at the door and just try this film. Chances are there will be something in here you’ll either relate to or will amuse you.

The Scene To Look Out For:
**Finale-ruining spoilers**
The scene of note is arguably the final scene. For a film that sets out to answer the question of can a man and woman simply be plutonic friends, it sort of descends down an obvious path. Cleverly but obviously. You know it’s coming, the genre dictates it has to, otherwise it wouldn’t get mainstream release (I’m not saying I approve or agree). This is a difficult point to judge because Chasing Amy did the same thing. It posed an interesting question about lesbian relationships (from a male point of view) but still came to a very standard male conclusion. But that’s a conversation for another time; the way this film ends, uncertain and unfinished is brilliant. Too many romantic comedies (when I say ‘too many’ I mean ‘all but four’) close on this awful point, this fairytale finale that ends with an exaggerated “Aaaand they liiived haaapiilyyyy eeeveeer aaaafteeer.” Bullshit. Life isn’t like that, things evolve and progress with age and it’s not a simple and sudden stop of infinite happiness. Films should be a snapshot, a point in time of extreme interest and importance that merits telling but when the film comes to a close, we like to know that the universe we’re watching continues – after all, that makes it feel more real and gives the audience a sense of hope… or despair, depending on the film.

Notable Characters:
This is probably more suited in the above section but fuck it, it’s my review, I’m putting it here. The role of Wallace’s sister, Ellie (played by the highly underrated Jemima Rooper) was well played and offered a pleasant and subtle look at a different story. All we know about Wallace’s sister is that Wallace lives with her, she has a child and she goes on dates that don’t work out sometimes. But that’s all we need to know. In one character building scene she goes out the door explaining to her brother that if the date goes well she’ll be back at midnight, if not, she’ll return at 8; the only other proviso is that Wallace watch horror movies with her son Felix. Sure enough, she leaves and both blokes are sat on the sofa watching The Thing, she walks in, they madly panic to change the channel and hide the ice cream as she sits next to them. Without a word being spoken, she retrieves the hidden ice cream and changes the channel back to The Thing. All three watch in silence and Felix gently holds her hand. Great stuff without being forcefully saccharine.

In A Few Words:
“A refreshing romantic comedy that cleverly presents all the tired genre elements as if they were new and somehow manages to convince us that it’s something different. Entertaining and very amusing”