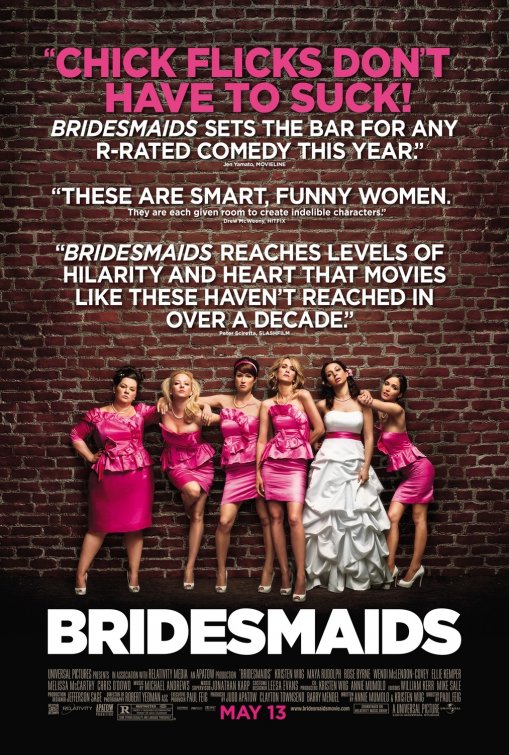 Roll Out The Support

Working a tedious retail job, sharing a flat with an irritating brother/sister combo and being involved in a futureless open-relationship, Annie [Wiig] claims to have reached rock bottom. On top of all this, her childhood best friend, Lillian [Rudolph] gets engaged and asks Annie to be the maid of honour; a task which requires Annie’s complete focus to assist in organising the wedding and all the events leading up to it. At the engagement party, Annie is introduced to Lillian’s newest friend, Helen [Byrne] (a connection through her fiancée), who Annie proclaims to be the epitome of glamour, wealth and success. The film happily steams along through various scenarios as Helen and Annie compete for Lillian’s attention, while undergoing fittings, bachelorette parties and other outings. Running parallel to this, Annie suffers a series of misfortunes both at work and at home and turns to a friendly policeman [Chris O’Dowd] for council.

There has been a great deal of circulated positivity regarding this film – especially in the United States, which saw the release of this movie a month-or-so ago. Many critics are claiming it’s a raucous female comedy, the likes of which hasn’t been seen on-screen for a very long time. And to a degree, they’re right; I would agree that there is a dramatic difference between women writing comedy and men writing comedy for women. We’re all familiar with crass comedies, laden with swearing and toilet humour, which sometimes work exceptionally well when fuelled by a genuinely tender story but somewhere along the line, despite the amusing scenarios and memorable performances, the pundits and promoters seem to have overlooked the glaring flaws, so as not to snub the chances of this ‘new’ thing. I, on the other hand, don’t particularly care and just because a female-driven crude comedy has been produced, I don’t feel obliged to promote it, even if it’s sub-par.

One could argue that this film is essentially The Hangover for girls, which is a fair enough statement but the reason the first Hangover film worked was the keen pacing and knowing how to time a joke. More often than not Bridesmaids feels bloated, milking jokes long after they have outstayed their welcome. A prime example occurred at the start of the film, as Annie and Helen are competing for the last word during the speeches at the engagement party. It started as an amusing rivalry but after the mic had passed back-and-forth four or more times, they were practically flogging a dead horse and even then it continued for a further four minutes, culminating in a strange, uncomfortable duet. The best thing about this movie is that despite the blunt and crude nature of the comedy, it was actually very funny. However, not knowing when to move on to the next development or simply stop the joke ruined any and all positivity. I’m not entirely sure if it was the script or a post-production decision but in addition to the jokes, the pacing and editing were completely off and dragging the events out for just over two hours was absolutely agonising at times.

On the technical side of things, it was reasonably well executed. The score seemed fitting and the cinematography work was wholly commendable but the key success for this film was down to the performances. Kristen Wiig centres the film well and gels beautifully with Maya Rudolph, producing a very credible on-screen friendship. Rose Byrne’s character was a tad paint-by-numbers and there wasn’t a great deal to develop but she still managed to keep up with her co-stars. And although she was used as the obvious butt for a lot of jokes and developments, I thought Melissa McCarthy stole every scene she was present in and made the whole film tolerable. The male cast did well for their supporting roles, the two key players being Chris O’Dowd and Jon Hamm, both of whom provided equally amusing comic relief. In fact, I could quite easily list every cast member and detail how well they did but as the performances were the film’s strongest point, that seems a tad moot.

Overall, I’m left disappointed by the entire thing – although I really shouldn’t have expected much from the director of Unaccompanied Minors. It was badly advertised but I had hopes that this would be the start of a wave of decent comedy films written by women and helmed by female writers. As grumpy and misogynistic as I often sound, I genuinely don’t want people to simply assume I’m writing this movie off because I’m not a girl or don’t understand it (as I have been accused of twice before in the past. This has nothing to do with male/female comedy, I simply don’t enjoy badly made films… often. Still, there is a great deal of potential within and for that reason, I would still recommend it to select individuals.

The Scene To Look Out For:
**There’s a good chance I may possibly spoil two films here**
Of all the various setups, the one I giggled at the most was little more than a reaction shot. Having lost her job and subsequently moved back in with her mother, Annie is watching Cast Away. Having never seen it before, Annie witnesses the point where Tom Hanks’ character abandons Wilson (I’m not explaining it, if you haven’t seen it). It’s a moment of realisation for Annie and she just sits on the couch, sobbing, “No.. Wilson”

Notable Characters:
As stated, Melissa McCarthy is drawn upon heavily for the butt of comedic setups throughout but she carries her role extremely well. Rather than being the cheaply drawn character-type you would expect her to be (and there are plenty of reasons/opportunities to confirm that status) she still manages to be both endearing and entertaining as well as disgusting. If you take anything away from watching this full, good or bad, it will no doubt be a Melissa McCarthy heavy scene.

Highlighted Quote:
“Do you want to tell a cop about it? We’re just like priests.. except we get to tell everybody afterwards”

In A Few Words:
“A sheer and utter disappointment from start to finish, with promising performances overshadowed by uncomfortably over-milked jokes and tedious developments”