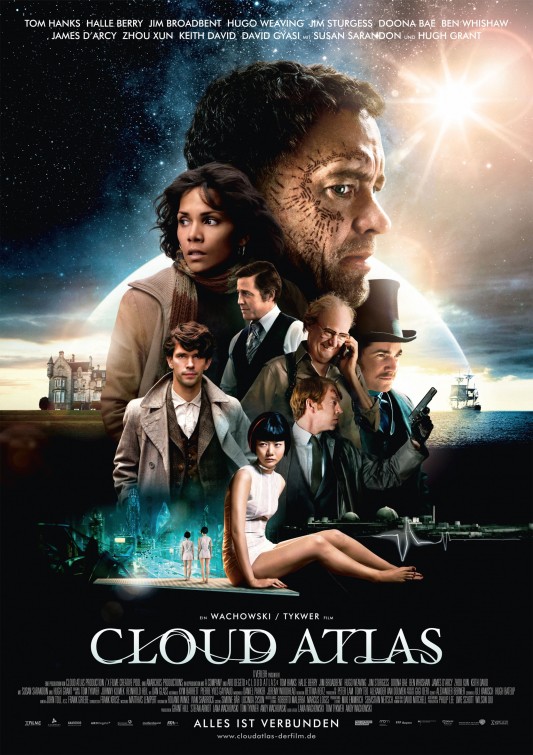 As someone who hasn’t read the source material, I can only review the film as a standalone piece. Having said that, I was working in a bookshop when David Mitchell’s critically acclaimed novel was released, so I’m quite familiar with the story and all I can say is that the film naturally cuts out a great deal and completely alters the structure. Whether this is for better or worse, I couldn’t say.

The story consists of six interlacing threads which feature repeating cast members in different time periods and countries. The first is set in 1849 and follows a young American lawyer [Sturgess] journeying by sea to secure a contract for slaves in the South Pacific. While aboard the ship, he meets a stowaway and is slowly and surreptitiously poisoned by the ship’s doctor, Dr. Goose [Hanks]. The second jumps to 1936 and introduces us to Robert Frobisher [Whishaw], a young man aiding aging composer Vyvyan Ayrs [Broadbent] whilst writing his own composition called The Cloud Atlas Sextet. 1973 San Francisco is the setting for the third tale, which depicts a pulpy mystery/thriller tale, as journalist Luisa Rey [Berry] investigates a conspiracy at a newly built nuclear reactor. The next story is set in contemporary Britain and has a more comedic tone. Publisher Timothy Cavendish [Broadbent] is on the run, after one of his ‘authors’ (a gangster named Dermot Hoggins [Hanks]) murders a critic and the mobster’s brothers come looking for money. Out of spite, Cavendish’s brother checks Timothy into a nursing home, where he is held against his will. The film then jumps forward to the year 2144 and a futuristic version of the South Korean capital, called Neo Seoul. This society has a curious class system of humans and fabricants – essentially clones who work menial jobs for twelve years before ascending. One fabricant in particular, Sonmi-451 [Bae] is liberated by, Hae-Joo Chang [Sturgess], a mysterious member of a rebel movement, who wishes Sonmi to know the truth of her people and the society she serves. The final story is ambiguously set “106 winters after the fall” on what is left of Hawaii. The post-apocalyptic island is divided between the peaceful valley dwellers and the barbarous kona tribe. There is also a third set of humans, much more advanced, called the Prescients. As outsiders, they are rarely seen and usually only trade essentials. In exchange for saving his niece, Zachary [Hanks] agrees to guide the outsider, Meronym [Berry], to the summit of a mountain.

Visually, Cloud Atlas is wonderfully impressive. The sets, costumes and production design are incredibly impressive, giving each story an instantly identifiable distinct look and feel. Despite the fact that this feature has been helmed by three directors, the entire overarching plot is neatly cemented by Pale 3’s (Tykwer, Heil and Klimek) complex yet elegant score. On top of that, the individual narratives are respectively compelling and interesting, ensuring that the audience is never bored, always entranced and hopefully looking for connections and symbolism throughout. Each story is presented as an individual tale with connections if one should choose to see them. I’m aware that the strength of the stories comes from the source material but to complete an adaptation some believe to be unfilmable is a mighty achievement. Yet despite all this praise I still left the cinema unsatisfied and a tad irked. Without spoiling the story, there was no urgency to any of the stories, everything simply unfolds before you. Characters are introduced, scenarios presented and at each climactic moment, a simple resolve is presented; sometimes arguably fitting, sometimes with immense plotholes but almost always disappointingly flat.

Curiously, the things that really irritated me were not the issues I would have expected. I anticipated the plot to be poorly translated, the acting to be obtuse and specific threads to be boring or tedious. Instead, I was enthralled by each individual story and loved the range depicted on-screen, holding each with equal regard. No, the thing that bothered me was the representation of characters. One of the interesting factors implied throughout the story is connectivity and familiar souls finding each other throughout time and space. To really solidify this, the trio of directors decided to use the same cast in different roles. As we can use computer generated imagery to turn actors into credible 9ft blue cat people, you’d think it would be possible to make an actor appear to be any race, gender, height, build. Evidently, we can’t. Even when the makeup, prosthetics and computer manipulation were reasonably credible, I never once believed the change. Instead of a seamless and flawless alteration, I just kept frowning as a curious carnival was paraded before me; Korean Hugo Weaving (well, Hugo Weaving with altered eyes and a wig), old man Hugh Grant (in abysmal makeup) and a ginger Doona Bae… seriously, they just slapped a wig on her, spattered her face with freckles, jammed a couple of contacts in her eyes and digitally expanded them. Terrible. The whole thing was just horrifically disorientating and jarring. I think the worst crime was the Nurse Ratchet type played by Hugo Weaving. Not only a horribly unconvincing woman but horribly unconvincing as anything other Hugo Weaving! You’d think this would be such a small element considering the wealth and magnitude of the story but in earnest, it’s one of the most important factors and utterly destroyed what could have been a remarkably entertaining release.

I’ve said it time and again but it can’t hurt to say it once more. Every now and then, creative individuals feel the need to go above and beyond, to make a leap of faith and invest in something completely different. This rarely pays off but when it does, it has a profound effect on the industry (sometimes overnight, sometimes decades later). The rest of the time, the projects are simply panned and forgotten. Subsequently, Cloud Atlas is Sucker Punch for the brain, rather than the adrenal gland – there are many positive elements and interesting facets but the whole thing is far too self-indulgent to make a genuine impact. From the close of this film, a single quote has been circling my head and although I haven’t chosen it to be my highlighted quote, I figured I’d bring it to your attention. The critical review of Dermot Hoggins’ book states “Four hundred vain-glorious pages expire in an ending that is flat and inane beyond belief.” While I don’t believe that this assessment is fitting of the novel, Cloud Atlas, it quite neatly describes my feelings for its cinematic adaptation.

The Scene To Look Out For:
Rather than highlight a single scene, I’ll pick a specific plot thread. While I found each uniquely riveting, with their own redeeming qualities, it was the composer’s tale that proved to be the most human and void of some of the more heavy-handed messages that are hammered throughout. I was interested by the distant future in Hawaii but there were simply far too many unanswered questions; would it have made a difference if Zachary had/hadn’t listened to Abbess’ predictions, was Abbess some sort of mystic, what exactly was everyone dying of and why the hell was Hugo Weaving The Hitcher? I’m sure there are answers in the book or possibly from multiple viewings but as a standalone narrative, these irritations were unnecessary.

Notable Characters:
The majority of the central cast play both heroic and villainous characters but the only one that actually surprised me was Hugh Grant. Usually I hate Hugh Grant but he was the only one who appeared in every single story and was almost unrecognisable in each. A very transformative effort and the embodiment of what the directors set out to achieve.. having said that, his old man makeup was still shite and they never attempted to make him up as a woman, so that should be noted.

In A Few Words:
“It’s obvious that a great deal of time, care and consideration has been poured into this bold, ambitious release but I fear it fails to reach the heights it strives for”