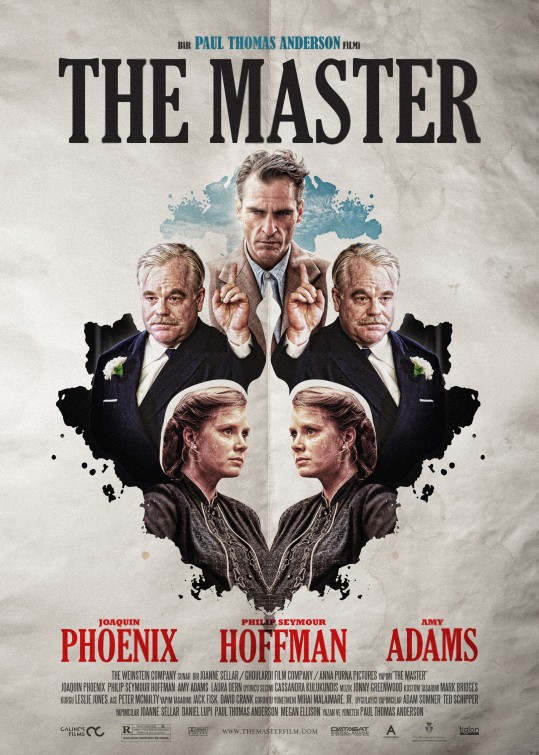 The film opens during the closing weeks of World War II. Freddie Quell [Phoenix] is an alcoholic and sexually obsessed veteran, suffering from post traumatic stress. Adjusting to civilian life proves difficult with Quell unable to maintain employment or social relationships owing to his excessive drinking and sex-obsessed manner. Furthermore, he brews his own alcoholic concoctions consisting largely of various chemicals. In a drunken stupor, Quell stows away on the boat of Lancaster Dodd [Hoffman], an author, doctor, physicist and the leader of a philosophical/pseudo-religious movement called The Cause. Freddie is ’employed’ by Dodd, who sees something in him, convinced he knows him from a past life. As Quell journeys with Dodd, he learns about The Cause and pledges his loyalty to Dodd. Unfortunately, the only way Quell can really manifest this is by producing powerful intoxicants and learning about the strange interview-based techniques of ‘the processing’. Despite his best efforts, Quell continually slips back into his old habits and cannot fully grasp what Dodd is preaching but he finds it comforting. Other members of The Cause, namely Dodd’s wife, Peggy [Adams], find Freddie unpleasant and fail to understand Lancaster’s attachment to him.

First and foremost, this is not a story about L. Ron Hubbard or Scientology. Having said that, the similarities make it incredibly hard not to draw comparisons. What Anderson has done, is to take the base aspects of a newly formed quasi-religious movement and immerse a very impressionable, mentally unstable individual deep in that environment. It has been noted that during times of war people pray with excessive desperation to the gods they know; after wars, new gods appear. With so many veterans developing post traumatic stress after World War II (and WWI but people didn’t really know what to call it) a whole generation of young men and women sought out new guidance and leadership, new servitude from a more physical manifestation of religion; which saw the rise of cult, especially in the US.

At the centre of this release are the immensely powerful performances, not only from the two leads but also from Amy Adams – who will no doubt be overlooked by several critics and observers. Hoffman plays Dodd with a curiously enigmatic and completely affable side that really draws you in. Despite all the nonsense and self-important gibberish he’s spouting, you can’t help but listen to every single word. This, of course, makes it all the more shocking when he makes his swift transition to disorientated and hostile when questioned by various detractors and government officials. Phoenix, on the other hand, plays Freddie in a horrifically memorable manner. Crippling awkward and absolutely impossible to predict, he concocts a fascinating study but I’ve expanded on Phoenix’s performance below. The movie is also gloriously shot and very Kubrickian in its style, much more so than anything Anderson has produced to date. Whether this is to do with the choice to film in 60mm or his partnership with Mihai Malaimare, I couldn’t say. A certain contributory factor that staples this style is Jonny Greenwood’s score. Having already produced blisteringly good musical accompaniment for There Will Be Blood, Greenwood’s work here strides into the foreground and proclaims itself of equal importance to any of the main cast and deservedly so.

Personally, the reason I enjoyed The Master so much, was the layered symbology. Freddie’s behaviour and interaction with Dodd creates a beautifully impressive analysis of an ape-like man’s reverence and fervent devotion to what he believes is a divine figure; acting out in the only way he knows how, frequently disappointing his ‘master’ but always falling back on his primal ways. And following his incapacity to understand what has transpired, he attempts to emulate and preach what he’s experienced with a very limited understanding of the reason behind it. Essentially, this film feels like a relationship between man and God, with neither coming out positively. God (Dodd) takes great pity on his favoured creation but also revels in his actions, hoping he can lift himself up and become something greater. Upon failing him, time and again, Dodd lashes out and belittles Quell. And the cycle repeats. Then we have Freddie’s proficiency with science (in his distilling alcohol with varied results) which intrigues Dodd but after it threatens his status, he tries to turn Freddie away from it. There’s also the possibility that this film is an analysis of id, ego and super-ego, represented by the central trinity and the journeys out to sea. This implies that Dodd is in fact ego, the organised, realistic part of one’s psyche, his wife is the critical and influential super-ego and Freddie is the psyche’s animalistic instinctive side. All of whom have difficult relationships and in the end the ego and super-ego venture out to sea and the id is left, comfortably stranded on the beach, finally rejected.

Does all of this make the film good? Partly. As a subjective artistic analysis, it’s profoundly interesting but as a structured narrative piece, it’s bloody hard work. But in theory, people should almost be expecting that. Anderson’s films are incredibly esoteric, focusing more on human interaction, behaviour and drives, as opposed to simple narrative devices. Subsequently, they have a tendency to abruptly finish, leaving the audience a little bewildered. Especially if they were led to believe this would be a simple expose on Scientology – which it blatantly isn’t. For Anderson fans, this will be another fine addition to his repertoire, for film connoisseurs, this will be a talking point of great debate but for the average cinemagoer, this will be a cryptic letdown.

The Scene To Look Out For:
During Freddie’s first processing interviews, he giggles, answers flippantly and passes wind but somehow enjoys the experience of being analysed, being given the opportunity to candidly reveal and retread his past. Dodd’s droning questions, repetition and intensity continue and Quell finds himself desperate to impress and succeed. Revealing unpleasant but honest memories, thoughts and opinions, Quell is able to reach a thoroughly cathartic state and in doing so, pledges fealty to Dodd and his methods. The whole scene is captivating from start to end; a real credit and example of these stellar performances.

Notable Characters:
Freddie Quell is, for lack of a phrase, terrifyingly believable; a truly haunting figure, rarely seen on-screen. As an imperfect being, seeking guidance from an equally imperfect being he is an ugly, skinny, misshapen shadow darkly reflecting humanity’s worst elements. His quirks, traits, posture, voice; everything is layered so beautifully to create a wholly credible damaged individual. As this is his first real performance since the deceptive I’m Still Here, it’s hardly a surprise Phoenix has immersed himself in such an overtly ‘acting’ role but, it has to be said, he does it very well.

Highlighted Quote:
“What a horrible young man you are. This is acting like an animal.. a dirty animal that eats its own faeces when hungry”

In A Few Words:
“Mr. Anderson produces a very singular type of film and The Master is firmly rooted in his patented style. As brilliant as the performances and analytical elements are, the narrative is lacking and the movie seriously suffers because of it”