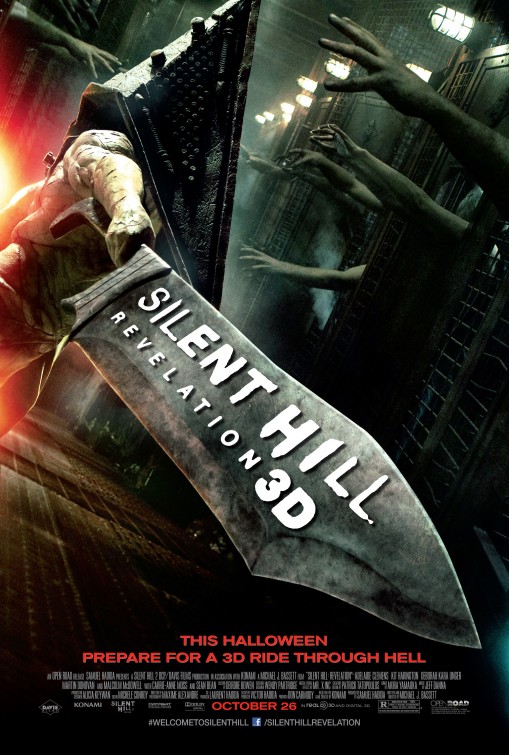 Prepare For A 3D Ride Through Hell

Before we delve into Silent Hill: Revelation, we should discuss its predecessor, Silent Hill. As a fan of the games, I really enjoyed Christophe Gans’ release and the various nods to the gaming series, not to mention an incredible performance by Jodelle Ferland. Despite all the references and video game inspired scenarios, Silent Hill was, at best, a 6/10; entertaining but overall a little lacklustre. The way the story closed, there really wasn’t a need for any sort of sequel but obviously, one was made anyway, a good six years later. So after six years, you’d expect superior visuals, a decent story and a convincing and compelling cast… yeah, none of that.

Following the events of the first Silent Hill film, an apparition of Christopher’s [Bean] dead wife appears and returns their daughter, Sharon to him. To ensure she is never returned to the possessed town of Silent Hill, Christopher and Sharon frequently change towns and aliases. So the story begins a few days before Sharon (now Heather) is due to turn eighteen. She’s used to moving around and has grown incredibly anti-social because of it. On the first day of school, Heather feels she is being followed and Christopher (under the name Harry) is kidnapped. With the help of fellow new student, Vincent [Harington], Heather journeys to Silent Hill to retrieve her father and hopefully provide some answers to her disturbing visions. Bad stuff ensues, oh my God a ghost, etc, etc.

There are a handful of positive notes to be highlighted, so we’ll address those first. Despite the fact this film didn’t look better than the original, it certainly didn’t look any worse. The set design was spectacular, offering a rusted, dystopian Jacob’s Ladder-esque nightmare world. Furthermore, the CGI and make-up for the beasts that inhabit said world were well handled and reasonably impressive. Their presence was pointless and inexplicably stupid but we’ll get to that later. Then there’s the film’s score, relying heavily on Akira Yamaoka’s mix of haunting melodies and chaotic clanging that made the games so immersive and petrifying. And I’d say that was about it. The film looked the part and sounded pretty good – only commendable points I can mention, that and they actually finished the damn thing; something always worth noting.

But it’s a well-known point that no amount of good actors, fancy visuals and decent music can make up for a terrible script and Silent Hill: Revelation has an astoundingly bad script. The story is a very loose adaptation of Silent Hill 3 with the previous film’s canon details shoehorned in for good measure but the whole thing comes off as more a checklist than a story. Monsters are used to pad out the running time, rather than actually serving a specific purpose and the creature designs are largely used as fan-service for those familiar with the games. As such, the scenes simply do not flow together and all character motivation and drive becomes questionable within minutes. Of course, the atrocious editing is no doubt down to the piss poor direction which manages to ensure that for a horror film, this movie is in fact not scary.. whatsoever. And as someone who immerses himself in film far too much (to the degree I will jump at pretty much any loud noise or creepy face), that statement is saying something. It’s not that Bassett doesn’t try to scare you, for there are quick snap cuts, long corridors, visceral gore, sudden bangs and confrontations aplenty but all of it comes off as hammy and rather pointless, especially when the audience couldn’t give a damn about anything happening on screen. Then there’s the recycled footage. After all, it’s been six years! Surely everyone’s forgotten about Silent Hill by now! So, why not save on the budget and use as much as we possibly can from the last film.. just ’cause we can. Take it from someone who knows what he’s looking for, there is a staggering amount of previous footage used here and not in a clever retrospective way.

Part of me wants to feel sorry for the actors who took part in this but as they all received a wage, I really can’t express that much concern. The three central roles are performed by Clemens, Harington and Bean, none of whom are American and for the lads, this appears to be a bit of a problem. Now, I’ve heard bad accents before, you just laugh them off and point accusatorially at the casting director but what the hell happened here? Sean Bean is known for his inability to be anything other than Northerner (that’s a British thing, for all my international readers) and he’s a returning cast member but why cast Kit Harington if he can’t actually sound like a credible yank? It’s completely jarring! And in a film with as many faults and flaws as this, the last thing you need is to be taken out of the story to whinge about how one of the leads sounds! Having said that, they do their best, everyone does. They try their hardest and put as much into their performances as possible but are continually let down by abysmally plotted out circumstances and pitiful dialogue – to the degree that the laughable “I’m looking for.. my daughter.. Cheryl… have you seen HER!?” from the first video game sounded more believable. Going back to the checklist, Bassett’s script contains several references with regards to characters but these are merely odd and loose interpretations of the game characters, lacking all their redeeming or interesting qualities. But rather than keeping these cameos as background simplicities, Bassett draws the audience’s attention to them by casting people like Carrie-Anne Moss and Malcolm Mc-fucking-Dowell for all of three minutes each! I appreciate Radha Mitchell and Deborah Kara Unger returning for a cameo but what the hell was everyone thinking?

The biggest crime of this film, other than completely killing off any possibility of a continuing series, is the ten tonne shit it takes on the Silent Hill mythology. So what I’m going to do, to close this review, is digress quite heavily. I’m basically going to tell you the plot for Silent Hill 2 (the game) as if I were pitching it to you. James Sunderland receives a letter from his deceased wife, inviting him to Silent Hill, a town they used to vacate to while she was alive. Upon arrival and not knowing what to expect, James finds the town deserted bar a few eccentric types, all but one of whom are female. While investigating the town, James encounters several horrific figures and nightmarish manifestations which attack the survivors. More often than not, James’ response is one of cowardice. As the attacks worsen, we come to realise that James was in fact so cowardly that he couldn’t stand his wife being ill, so killed her. This world of horrors is the creation of her malice and rage to him, hence why everyone and everything he encounters is very feminine, even to the point of sexual – all except a executioner figure with an enormous blade and a pyramidal cone covering his head who rapes and murders the twisted monsters. There are a few different endings but basically, James feels like a shit and is punished. So rather than being a crappy action horror piece, it’s in fact a terrifying supernatural and psychologically horrific thriller. There! Now would it have been so hard to make that a film!? Honestly!

The Scene To Look Out For:
A prime example of the ridiculous fan service element taking precedence over common sense, we will analyse the nurse scene. The Silent Hill nurses are a bit of a fan favourite for two reasons: 1.) they were fucking scary in the game, playing on that childlike fear of staying still and quiet to avoid being seen 2.) they show a lot of cleavage and leg while their scarred faces are completely covered – this allows guys to ogle and women to cosplay, etc. From a narrative point of view, they sort of made sense in the first film, less so than in the game but still enough sense to warrant being there. Here, they’re just in an operating room in an asylum. A room which appears to be used a great deal. Why? Why the hell not. So when two members of the evil order wheel a restrained Vincent into the room they are instantly attacked but act surprised, resorting to poorly delivered dialogue such as “Hey you. Get offa him” and “What the.. oh no!” Clearly a product of someone sitting at a computer or around a writer’s table and blurting out, “Hey, you know what’d be cool here? Room full of nurses! Shit yeah! I’m gonna write that down… room.. full.. of.. nurses. Sexy.”

Notable Characters:
Despite the terrible scenarios and ridiculous requirement, Adelaide Clemens somehow manages to pull through with a little credibility. Granted, her character was dumb and haphazard and downright disorientating but at least Clemens kept a consistent level of professionalism throughout. I wouldn’t be surprised if she goes on to great heights and this is a mere blip on an otherwise decent career… either that or this will haunt her forever.

Highlighted Quote:
“It’s a key.. but what does it unlock?”

In A Few Words:
“Not only a disservice to the video games and a terrible sequel but an absolutely atrocious film that had no business getting past the first draft stage!”