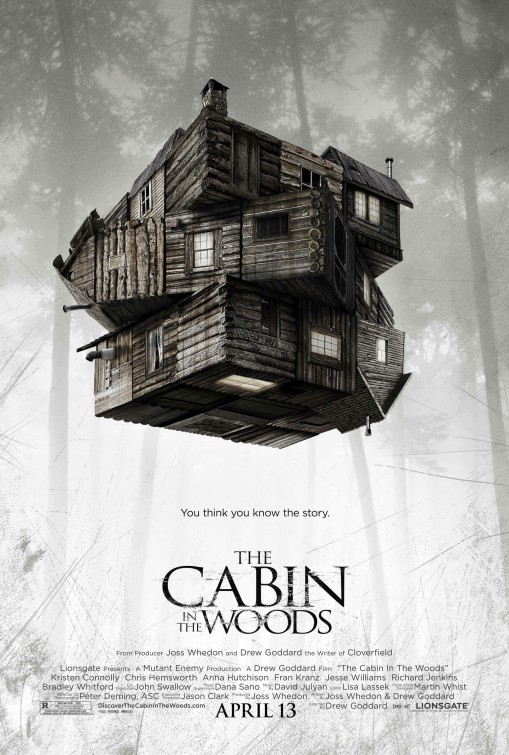 Don’t Play By The Rules

Analysing the specificities of this release is going to be exceptionally tricky, largely because this is a very intelligent release masquerading as a simple teen-slasher flick. To really discuss the intricacies of its brilliance, I am going to have to completely spoil and reveal the entire plot. So, consider this fair warning: this entire review is going to be littered with spoilers and plot details that will ruin the film for you, if you have yet to see it. So wait until release, watch the film, enjoy the hell out of it and then come back here and read through this review. Alternatively, just skip to the last paragraph for my summative comment. Clear? Good.

Before diving into the plot, we’re treated to a short, simple back-and-forth between two technicians working in a laboratory complex: Steve Hadley [Jenkins] and Richard Sitterson [Whitford]. Very few details are explained, bar the severity of their work and how important it is that everything goes ahead as planned. From there we’re introduced to five ‘typical’ college students – or at least, they appear to be. Dana [Connolly] is the chaste, naïve element of the group, Jules [Hutchison] is her ditzy blonde best friend, Curt [Hemsworth] is Jules’ football hurling boyfriend, Marty [Kranz] is the conspiracy theory spouting stoner and Holden [Williams] is the slightly scholarly jock with a heart of gold. Only they’re not.. not at all. In reality, Dana is getting over a relationship with her teacher, Jules has recently dyed her hair but isn’t overly promiscuous, Curt is a deviously intelligent Sociology major, Marty is surprisingly on-the-ball and Holden.. ok, Holden’s about right. In atypical genre fashion, the five friends set out into the middle of nowhere, to spend the week at Curt’s cousin’s cabin. Everything starts very paint-by-numbers, with the creepy attendant at the lone gas station, the isolated rocky mountain pass and the eerily decorated cabin in the middle of nowhere. The big plot device is that all of this is planned and orchestrated. Everything that follows, the kids in the woods, the debauchery, the alcohol, the sex and all the other cliché elements of horror films are actually part of an ancient ritual sacrifice. Sitterson explains that everything is based on choice, in order for the rite to go ahead, the kids have to elect to ignore the signs and enter the creepy cellar, choosing their own grisly fate. Even the order they die in is incredibly specific; all of which abates the old evil gods entombed beneath the earth. I felt so dirty writing that.. like I’ve spoiled the end of The Sixth Sense or something.

The writing is key to this film’s genius. Littered with tell-tale traits throughout, the whole thing is despicably Whedon – an immense compliment in my opinion. The kids themselves are realistic, intelligent and relatable, the dialogue is fresh and crisp, the switch between horror and comedy is sublime and the grey area is so thick and expansive that the debates between audience members alone will no doubt spawn an immense cult following. The plot is sickeningly clever, mixing satire, mythology, humour and stock character archetypes to produce an engrossing story that uniquely plays on the audience’s expectations and genre prejudices. Director, Drew Goddard is one of the Whedon graduates and his influence is evident from start to finish. Other than the writing, the glorious pacing is perfect, building carefully before exploding with a balls-to-the-wall blowout finale. Having worked on several Whedon projects in the past, Goddard has been exposed to a goldmine of acting talent, whilst still retaining the ability to find and utilise unknowns. If I’m honest, the entire production has wall-to-wall pitch-perfect casting, with several familiar faces popping up. Of the five leads, everyone does a stellar job, playing up audience expectations and surprising us at the same time but the real highlight of the film is the goings-on ‘behind the curtain’. Everyone working for the unnamed sacrificial corporation sells the industry as any other job, despite the blatant absurdity of its nature; none more so than Jenkins and Whitford – always nice to see these two getting work.

The violence is horrific, the laughs are genuine, the tension is ever-present and the story is gripping, so almost every review will undoubtedly have a hard time not referencing the Evil Dead films but I actually think this film is significantly better. There’s no room for a sequel, the narrative structure is clear and the production value is astonishing. Ultimately, this is probably the most enjoyable movie of the year thus far and certainly one of the most pleasantly surprising. If you’re a fan of black humour or the horror genre, you owe it to yourself to watch this film.. multiple times.. and then introduce it to everyone you know.

The Scene To Look Out For:
Unicorn spearing a guard against a wall. That’s all I’m saying.

Notable Characters:
As brilliant as everyone was, I’m a bit of a Bradley Whitford fan (ever since The West Wing.. hell, maybe even Billy Madison) and seeing him on-screen is a delight. Furthermore his character was hilarious, informative and absolutely on-key for this kind of production/role. No one put a foot wrong, it’s a stellar cast, what else can I say?

In A Few Words:
“Simultaneously the most funny, clever and scary film of its kind since Evil Dead 2. Refreshingly exceptional”