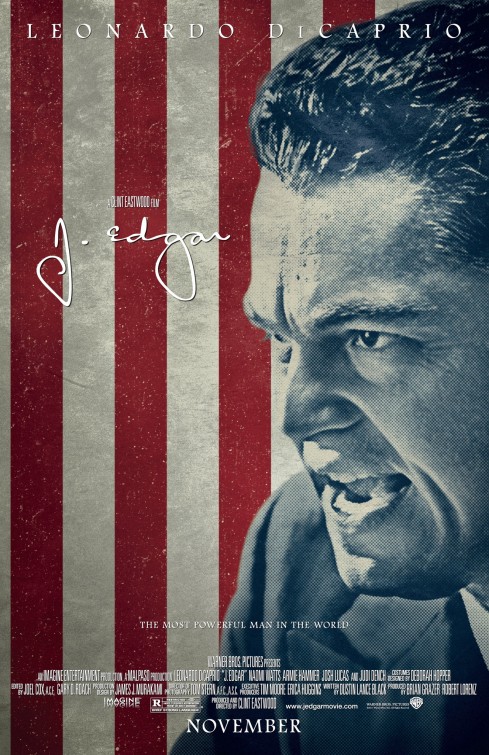 Re-Clarify The Difference Between Hero And Villain

I must confess, I have immense respect for Clint Eastwood and as such, I harbour an equally immense personal bias for his work. Every critic strives for impartiality but when faced with an average/awful film by someone we admire, we cannot help but emphasise the positive and bitterly defend the weaker elements. So despite the fact that I am an ardent fan of Eastwood and convinced that DiCaprio is one of the finest acting talents of his generation, I will try to keep this review balanced. The film opens on J. Edgar Hoover [DiCaprio], head of the FBI, chronicling his career and the inception of the bureau he helped found. With the assistance of several agents, he begins to dictate key events in his working life with the occasional cut-away to more personal elements. From here we discover Hoover’s committed drive and lack of social skills stem from the overbearing and smothering nature of his mother. We are also introduced to Helen Gandy [Watts], his lifelong PA and his second in command, Clyde Tolson [Hammer]. The plot neatly divides its time between personal interactions and innovations in forensic science, without overly losing itself or bogging us down in one particular case: so much so that key elements in Hoover’s life – such as the 20s communist raids, the prohibition policing, the Lindbergh baby, the infamous political files and supposed cross-dressing homosexuality – are given equal treatment.

Ultimately, I’m not entirely sure this film actually works. Considering the sheer magnitude of speculation surrounding the individual in question, there’s a great deal of care taken not to over-embellish or exaggerate what audiences may expect and offer a well-acted story about a controversial figure. But with a career that spans five or six decades and a personal live shrouded in mystery, a film can only analyse so much and I cannot help but think that a film (albeit nearly two and a half hours long) is not appropriate for Hoover. Outside of the man himself, we also have the supporting roles of implied lover, Clyde Tolson and the vigilant, ever-present personal assistant, Ms. Gandy, neither of whom are fully explored or ever realised outside of just that. Clyde clearly has feelings for Edgar that are never openly reciprocated and Helen Gandy goes from a bubbly young, career-hungry woman to a long-faced subservient desk jockey. Had the script been longer and afforded us a chance to see how these three individuals changed so radically, we may have a more enjoyable film; without it, J. Edgar feels rather tepid.

From a technical standpoint, there’s a great deal to praise and a fair amount to critique. I actually liked the cinematography, with its heavy use of shadows and washed-out colour palate to denote which era we were watching but at times the curious lighting only served to highlight one of this film’s weakest elements: the make-up. I don’t know what it is about aged make-up but sometimes it works beautifully and other times it can be terribly jarring. I don’t know if they were trying to depict an aged DiCaprio and Hammer or model the make-up to resemble their real-life counterpart but it didn’t work. What we were treated to was a cheesy rubber mess, detrimentally afflicting the genuine age-acting taking place. With such heavy criticism on the key factors (visuals and a meandering flow) it’s quite easy to forget the several decent supporting qualities. First off, the script wonderfully illustrates that no matter how flawed the man was, he instigated a countrywide overhaul of how crime scenes are treated and how criminals are caught. On top of that, the treatment of Hoover’s homosexuality (closet, chaste or otherwise) was well handled without ever resorting to pejorative stereotypes, force-fed assumptions or ridiculous over-the-top campy/hammy acting. And then there’s Clint Eastwood’s simple and elegant piano-based score which sits gently over the on-screen drama.

Despite any negative thoughts, I cannot help but remain positive about this release, largely when in comparison to The Iron Lady. Rather than run through a montage of achievements, we focus on key events, all the suggestions about Hoover’s personal life were within the realm of credibility and despite straddling the fence of impartiality, the script never leads you to one conclusion or the other about the man himself, you make that decision for yourself. But alas, such minor points fall to the side of the road when considering that the film itself does not suit the cinematic medium. If I’m honest, I am starting to doubt whether cinema is really right for epic biopics such as this. Sure, it can handle the rise and fall of a musician rather well or the trials and tribulations of a limited term official such as a President but only when focusing on specific periods or events. Outside of that, you’re either lost in expositive narrative, disorientated by pacing or overwhelmed with a crammed story – much like J. Edgar.

The Scene To Look Out For:
Two scenes in particular struck me. The first and most important is the semi-confrontational discussion between Hoover and his mother about a young boy Edgar grew up with, who was teased for possible homosexual curiosity and ended up commiting suicide. Hoover’s mother then goes on to maliciously add that she would rather have a dead son than a daffodil for a son. Heartbreaking writing and gloriously acted. Secondly, as Hoover recalls his experiences during a raid on a communist printing hideout, he notes how the police trample the scene, brutally beat suspects and throw out crucial evidence – all of which is neatly depicted on screen – before openly admitting that this was not due to sloppy police work, that it was simply a different time and little importance was placed on forensics. It’s a very small part of a large release but a critical segment nevertheless.

Notable Characters:
As with most biopics, anyone outside of the central focus is as good as dismissible. Granted, Judi Dench and Armie Hammer do a decent enough job of it but Leonardo DiCaprio is by far the greatest touch to this release. However, no matter how much praise or approval I could bestow upon him, his performance will be forever tarnished by that crippling make-up.

Highlighted Quote:
“All the admiration in the world can’t fill the spot where love goes”

In A Few Words:
“A valiant effort but severely let down by various technical aspects and structural devices”