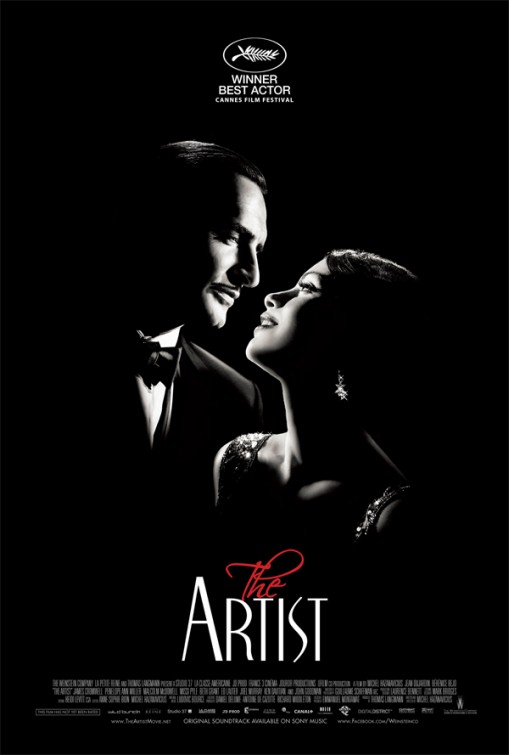 The story opens with the premiere of silent movie star George Valentin’s [Dujardin] latest hit. Within minutes of Valentin’s vaudeville-style routine and extraordinarily affable manner, it’s easy to see why he’s such a success. Outside the cinema, he’s greeted by hounds of photographers and screaming fans; one of whom, Peppy Miller [Bejo], accidentally stumbles into the spotlight and quickly becomes the focus of Hollywood newspapers. Trying her luck, she auditions with Valentin’s studio Kinograph, run by cigar-chomping producer, Al Zimmer [Goodman]. After a rough start, Miller finds herself as a supporting extra in Valentin’s latest picture and from there slowly works her way up the ladder to major star. Several years later, Zimmer takes Valentin to one side and introduces him to test shots for the latest revolutionary element in film: sound. Naturally, Valentin laughs it off as a gimmick but after a vivid dream becomes intensely paranoid about the changing industry. A fear he soon realises as Kinograph announce they will only be making ‘talkies’ from now on. Full of pride and branded as obsolete, Valentin walks out of the studio vowing the audiences will come to see him no matter what he’s in. Convinced of this, he begins pouring his own money into a new silent epic called Tears Of Love; it’s only later he discovers his personally funded release is up against Kinograph’s talking sensation Beauty Spot, starring Peppy Miller. Not only is his film regarded as hammy and outdated, Valentin suffers greatly due to the Wall Street crash. Penniless, morose and forgotten, Valentin sinks into a deep depression. And that’s all I’m saying about that, anything else will spoil it.

The fact that this movie has been shot in black-and-white on proper film, without sound (bar a few tiny nods) shouldn’t actually make a blind bit of difference and the primary point of any conversation or critique deserves to be the directing and acting. As much as this may feel like a bold move by Hazanavicius, it’s just an artist’s desire to relive a bygone style of filmmaking, paying tribute to cinematic pioneers and reminding audiences of why old films held such sway. Each and every scene is beautifully lit and shot, evoking overwhelming levels of nostalgia for thirties and forties films. But outside of that, if the leads had in any way acted outside of the era’s expected style, The Artist wouldn’t have worked. Thankfully, Dujardin and Bejo beautifully channel everything one remembers/expects to see in a pre WWII film – Valentin is charming, affable, horrifically talented and lights the room with an almost caddish smile and the aptly named Peppy is bold, bouncy, spectacular and perfectly delightful.

Being a silent film, the score – provided by the relatively unknown Ludovic Bource – plays an absolutely crucial role. If I’m honest, the first third of the film does suffer a little from repetitive upbeat themes that crash on happily without really letting up but once the real drama and meat of the story kick in, the score is more than ready to meet the challenge. Visually, the lack of sets and heavy use of location shots gives the whole movie more of a 40s aesthetic feel than 20s but this in no way detracts from the fact that bar the odd appearance from familiar faces such as John Goodman, James Cromwell and Malcolm McDowell, you could easily believe The Artist was shot decades ago.

With so few negative points to comment on and a cortege of praise to bestow upon it, I am slightly worried about this movie; much in the same way that I was worried about Hugo and the vast chasm between critically acclaimed releases and public opinion. Personally, I adore this movie and it’s a wonderful treat from beginning to end but I can’t help thinking it may be because it plays on my love of cinema. If I were feeling particularly cruel, I could suggest that this film is less an original creation and merely a homage heavy device, stealing the best bits of twenty years of classic cinema, helmed by actors impersonating long-dead Hollywood legends. For that fear alone, I have marked this film down from a perfect score. Maybe I’m playing up to paranoia, who knows? I will admit that as an artistic creation, this movie is masterfully handled and by contemporary standards it’s a very welcome breath of fresh air. But how would it fare if it were actually released in the thirties or forties? The fact that I cannot answer that question is why I’ve begrudgingly settled on nine out of ten.

The Scene To Look Out For:
Two scenes in particular really stood out for me. The first is during Valentin and Miller’s first on-screen appearance. Valentin’s character stalks a crowded room, dancing with one partner before moving on to the next – who comically turns out to be a heavyset gentleman; which alone is very entertaining. Then the shot resets and Valentin attempts his second take, this time bursting into laughter while dancing with Miller. Despite several takes of the exact same thing with a slight and tender musical accompaniment, it’s a thoroughly engrossing moment. Secondly, one of the most jarring moments, is actually a dream sequence. Having been introduced to the concept of talking films, Valentin storms back to his dressing room and sips at his glass before placing it down on the dresser – the sound of the glass clinking against the dresser surface is as much a shock to the audience as it is the main character. This short scene escalates gracefully, never overwhelming the audience or becoming too ridiculous but making a simple, powerful statement.

Notable Characters:
Despite the fact that Bejo does an exceptional job, Jean Dujardin channels so much through this release that it would be impossible to think of any other individual in that role. Filled with old-world class and charm, phenomenal energy and pride, and heartfelt sorrow and betrayal, Dujardin instantly sets the scene, propelling us into a beautiful bygone era.

In A Few Words:
“Capturing all the charm of classic 30s cinema and all the bitter sorrow of Sunset Boulevard, The Artist is nostalgic excellence” 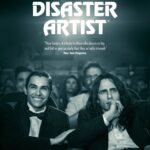