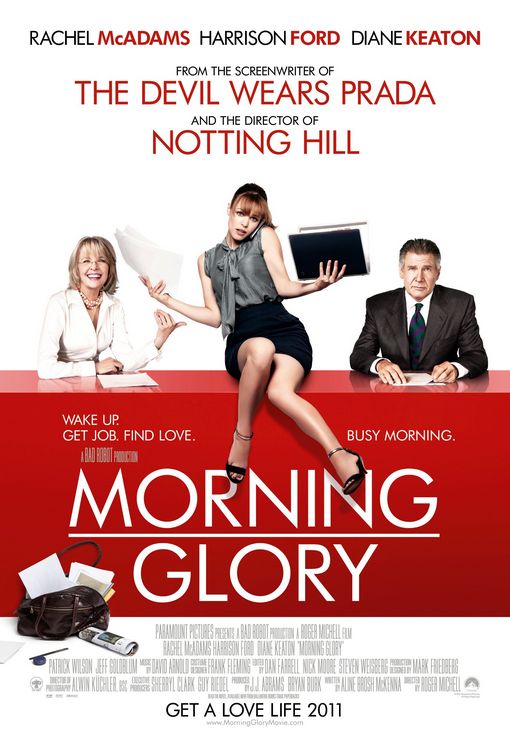 Becky Fuller [McAdams] is a young workaholic producer for a small morning TV show broadcast in New Jersey. Within minutes, we learn that Becky has no real life to speak of and that her subsequent firing results in a major loss of identity. Thankfully, persistently bugging every network in town is the best way to score an interview; on top of that, being as irritatingly over-the-top as possible in the interview itself – despite being under-qualified and inexperienced within a large corporation – is a sure-fire way to guarantee a job. So, Becky moves to New York (as most of you know, I instantly award any film set in New York one point) and realises that ‘Daybreak’ is a sinking ship. Intent on making real change, Becky instantly fires the male anchor and goes about investigating every potential candidate contracted to IBS — IBS is the name of the network that employs her, which is quite fitting as IBS stands for Irritable Bowel Syndrome: the uncontrollable production of slurries of excrement. Becky discovers that acclaimed newsreader, Mike Pomeroy [Ford] is currently inactive but still on the payroll; as such, she explains that he is contractually obligated to accept her offer. The tension between current anchor, Colleen Peck [Keaton] and the stern Pomeroy is called on time-and-again, as is his general disdain for the quirky gimmicks of morning television. Despite the new arrival, the ratings are still plummeting and it’s up to Becky to save the show. But how can she do all that, while playing nanny to the cranky cast, scraping ratings, juggling obligations and attempting a relationship with the tall, strapping young man working in . . . wherever the fuck he works? It’s like Ally Mc-fucking-Beal all over again.

There are some very strong positive elements present that make the entire ordeal completely tolerable, namely the performances. The supporting cast are fairly solid, Keaton offers a refreshingly amusing performance, as does John Pankow as Lenny, the father-like mentor, Matt Mallory as the comical weatherman and Rachel McAdams somehow finds the energy to portray the attention deficit Becky (but more on that in my highlighted character section, below). Then there’s Harrison Ford, who seems perfectly cast as the cranky, aging professional, Mike Pomeroy. However, there was something missing, something I couldn’t quite place until Ford delivered his “I’ve won countless awards, I’m respected, I’ve laid a washcloth on Mother Theresa’s head” speech – this is Harrison Ford we’re talking about. Can you even name a film he’s been in over the last decade or two that wasn’t Indiana Jones? What the hell does he know about integrity? Ooooooh scathing.

The film’s second forte is the continual rivalry between entertainment and hard-news. It’s an interesting argument unfortunately told by someone who has no idea what makes good television. Underlying this is an interesting psychological analysis of misplaced father issues – yeah, I got rather bored with the materialistic story and started looking for things that probably aren’t there. What I mean by that is that Becky’s drive appears to stem from a need to impress her dead father, unable to replace him with flimsy relationships that she sabotages in favour of her surrogate child (the show), which provides her all the distraction she needs to ensure she never achieves significant goals in her life. This rather random theory is supported by the fact that the sexual relationship between Becky and Adam [Wilson] is very loosely covered, while the father/daughter dynamic between Becky/Pomeroy and Becky/Lenny pulls centre focus. But I digress, on to the negative.

For the few saving graces, there is a wealth of substantial flaws that eat away at the film as a whole. The whole career woman storyline is completely derivative; I realise this is your typical genre flick and therefore it adopts a paint-by-numbers approach to the life of a working woman but that’s no excuse to just ‘make do.’ The film is littered with trite moments that scream “I want the job and the cute guy and the responsibility and to be taken seriously and live in the big city and eat salad and have fun and make everyone happy and make my mum proud and and and” and SHUT THE FUCK UP YOU WHINEY TEENAGER! On top of this, there’s absolutely no real insight into working in television (better examples include 30 Rock, Studio 60 and The Day Today . . sort of), it’s just a busy backdrop for the screenwriter to drop their neurotic little creation into, like a Deinonychus running loose in a primary school . . . I guess.

There are enough decent moments and entertaining exchanges to get you through it but ultimately, the whole thing is rather forgettable. I’m sure it’ll break even but there’s no way this film will do anywhere near the kind of business it could hope to. Most depressing of all is the fact that this project was helmed by Roger Michell, director of Notting Hill, Changing Lanes and Venus; three very different but rather well-crafted films. The only statement left to use is ‘disappointing.’

The Scene To Look Out For:
**Yarr.. there be spoilers ahead – I’m being a pirate, yarr!**
Two points here, the first being a nasty little montage, suited only in deeply satirical work. Becky has been offered a job working for The Today Show and whilst weighing up whether or not to meet with NBC, she surveys her current working environment. Cue familial slow-motion shots with people laughing, slapping backs happily, throwing scrunched-up paper balls playfully before cutting back to Becky, who inhales deeply and makes a difficult choice. Fucking awful. Written by the kind of person who thinks that high school was exactly the same, rather than the box of torture and homework that it actually was. Erghh. Second to that is the ending which just.. depressed the shit out of me. Basically, Ford loses. He single-handedly saves the show by delivering a real, cutting edge story but still hates the cutesy bullshit that he’s expected to do. Then, in some change of heart, he starts cooking a bloody frittata on air, to show that he has a human side. How miserable an ending is that? One that says moody intellectual types must give in to sprightly, upbeat, petulant brats?

Notable Characters:
I should be talking about how perfectly fitted Ford is to the cantankerous old bastard role or how easily Keaton slips into her character’s shoes . . but everyone else is doing that. Instead, I would like to highlight Rachel McAdam’s character – largely because she annoyed the piss out of me, despite the decent acting. I’m sure words like perky, driven, passionate and determined are being batted around other reviews but I would prefer to use self-obsessed, irritating, manipulative, blind and ratings-whore. As stated, McAdams does a pretty good job and I’m not just shooting down the career woman because I’m some misogynistic thirties throwback, I genuinely believe Becky Fuller was a hollow, moronic creation with little to offer other than ‘what sells’. I swear, nothing is more infuriating than some jumped-up writer sitting down and penning “Oh, if I try my hardest and work every hour I can and stamp my feet, I’ll make this the best darned show in town, gosh howdy” only to climax it with, “And I did! Yey! Yey me! Aren’t I fucking wonderful!?” I’m simply amazed more people wouldn’t be insulted by that. This is a woman who is not only fishing for nothing but ratings but wholeheartedly believes that Diane Keaton rapping with 50 Cent is good television and a close-up of her kissing a frog is so hilarious that it requires a second attempt. These are the kind of idiots that are filling contemporary television with mounds of steaming shit.

Highlighted Quote:
“The argument between news and entertainment went on for years and guess what, your side lost!”

In A Few Words:
“Mediocre cinema held together by fairly affable characters portrayed by more than capable actors”