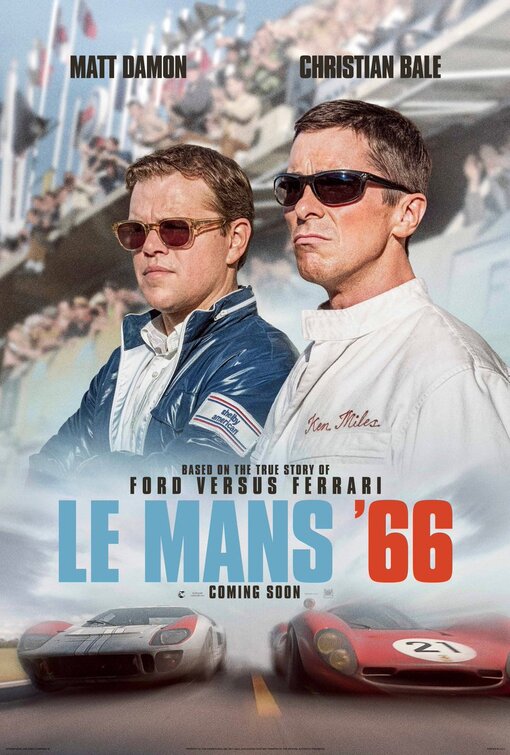 They Took The American Dream For A Ride

In the mid-1960s the Ford motor company are feeling the pinch with fellow US rivals pushing them out of the market. The head of the company, Henry Ford II [Tracy Letts] sets his team the task of finding a way to revolutionise their company. Lee Iacocca [Bernthal] highlights that Ferrari are the leading company for winning global racing competitions but because their handmade output is so minimal, they are facing bankruptcy. Several Ford representatives visit the Ferrari heads in Italy but are turned away and mortified when word of the failed merger gets out to newspaper. As an act of revenge, Ford declares he wants to replace Ferrari as the manufacturer of the fastest cars and tasks his team to set to work immediately. The Ford executives then turn to ex-racecar driver Carroll Shelby [Damon] who takes on the impossible task but knows that his only chance of success is pairing the fastest car with the best driver, who just so happens to be Ken Miles [Bale], a highly opinionated and difficult individual that Ford do not want staining their company image.

If you’ll forgive the racing analogy for a moment, this movie functions on the concept of the car and the driver. The car can have all the technical specs aligned perfectly but if it isn’t operated by a driver in peak condition, the results can be anywhere between lacklustre and catastrophic. From a technical standpoint, Le Mans 66 is as good as it can get. The sound design is magnificently on point, working in harmony with a jazzy-rocky score that mirrors and elevates the upbeat, hopeful, fun tone and helps give the entire feature a vibrant, very fun energy. On top of that, the direction is exhilarating and the road-level camera weaving in and out of the thundering cars creates an amazing sense of tension while the script maintains its electric pacing. Then we have the subtle elements of the period aesthetic and production design, which lovingly recreate the mid ’60s and celebrate the craft of racecar manufacturing. But it would be so easy to flood the film with these components and smother the audience but Mangold has the marvellous ability to make big budget releases feel intimate and keep a blinker-vision focus on story and character; which brings us to the driver or our analogy.

Whether music, sport or politics, biopics are rarely about the subject matter or surroundings that the leads find themselves in and more about the personalities that populate them. Equally, Le Mans 66 is a film about friendship and obsession, more than cars and racing. At first glance, it’s not easy to see the similarities between Shelby and Miles, with the former’s business savvy and the latter’s excess of personality but as the film unfolds, it becomes apparent that both men are extremely dedicated and talented drivers who have been held back from succeeding and doing what they love by their own faults. In the case of Shelby that’s his heart condition and for Ken it’s his brash personality and refusal to compromise. Ultimately, both men are extremely arrogant but Ken’s confidence and Carroll’s charm quickly win the audience over and it’s made clear that these men have both a rivalry and a respect for one another. One of two great examples of this is when Shelby is arriving by private plane to a launch event and takes control from the pilot (citing his WWII experience as justification) before banking heavily and performing quite the daredevil landing. The other is during a fistfight between the two leads which is immediately robbed of any threat when Miles’ wife pulls up a chair to watch and Shelby reaches for something to hit Miles with, putting his hand on a can, realising that would be too dangerous and so reaches for a loaf of bread instead. These are subtle little inclusions but ones that deftly demonstrate the bond between the two reluctant friends.

But the friendship between Carroll and Ken is also a problematic one. It is given such importance that it pushes out room for the true racing rivalry and the bond between Miles and his family. For a film called Ford v Ferrari (in the States at least) the film is less about the rivalry between two drivers, as is the case in Rush, and feels more like Ford executives v its own teams. This constant stop-start yanking of the chain creates an extremely frustrating friction for the story’s flow. What should be a straight shot to victory with various trials and tribulations on the way is marred by in-house disagreements and hindrances. My problem, however, is not necessarily with this in-fighting but how it is neglected in the script. We have the incompetent head desperate to stand up to his grandfather’s legacy, the supposedly good guy suits who have no real influence other than to kick the story off and the weasely lieutenant whose motivation is never made explicitly clear other than to keep some sort of structured order on the company but without any clear personal gain or consequence. Other than a few sneers and mean comments from Enzo Ferrari and his lead racer (whose name I don’t even remember because he’s barely in the movie), Ferrari fails to provide much of an antagonistic presence. Coming back to Miles’ family, this film’s poor gender and race representation – although probably historically accurate – serves to illustrate that this movie can be boiled down to a petty pissing contest between two rich white men. The stakes are actually fairly low and the finale loses a little of that great pacing by shifting the emotional high from Le Mans itself to a handful of loose targets. So the longer the film stays with you, the more those heady moments fade and all you’re left with is a competent rowdy petrol-head film – or to put it another highly unfair way, an entertaining but unfortunately dated boys film geared to a very specific demographic.

The Scene To Look Out For:
Repeatedly throughout the film, Ford traipses all over Shelby’s decisions and encroaches on any freedom he has to run his team. The primary source of this contention is Ford’s inability to keep Ken on message. Subsequently, the officials flex their muscles and bench Ken from competing. The following scene doesn’t actually show the race but the audience experiences it by proxy as Ken listens to race via the radio. It’s a simple scene but a well-executed one that doesn’t rely on flashy CGI visuals, only the passion and expressions on Miles’ face.

Notable Characters:
Earlier I briefly mentioned the central antagonist, Leo Beebe played by Josh Lucas in a role he usually finds himself in. To reiterate what I said earlier, his motivation is arguably to preserve his position and the company image but the execution is so painfully pantomime. To be clear, I don’t think Lucas does a particularly bad job, I think the tonal nature of the movie sets him up as a very one dimensional adversary. For a two and a half hour film, I’m not suggesting more runtime is devoted to this individual but some of his scenes could have benefited from illustrating if there was any actual fallout should Ford’s racing venture fail, aside from a decrease in share value – which is a notoriously dull but very grounded reason.

In A Few Words:
“A wholly agreeable, fun and gratifying release, if a little formulaic, predictable and ultimately safe”