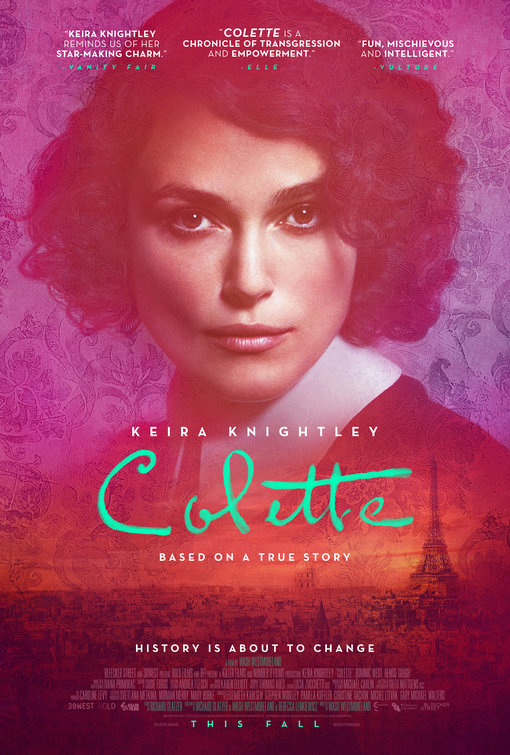 History Is About To Change

Set during the late years of the 19th century, we are introduced to Gabrielle Colette [Knightley], a country girl who weds notorious Parisian libertine and critic Henry Gauthier-Villars [West] who writes under the pseudonym Willy. Admittedly, Henry does not actually do a great deal of writing himself and merely employs a staff of ghost writers, allowing him to generate simple concepts for development and then sell the Willy brand. During a dry spell, Henry charges his young wife to write about her childhood experiences. In doing so, the ‘Claudine’ series is born and a best-selling movement sweeps France as women everywhere see something of themselves in Claudine. As success grows, Henry’s methods of extracting pages from Colette turn more abusive and Colette finds herself both exploring different types of relationships and discovers a burning desire to define herself outside of her husband’s shadow.

I will admit, I was only loosely familiar with Colette’s work, outside of the fact that her novel Gigi was adapted into the 1958 film of the same name. And yet, when you hear about her experiences and learn about this bombastic, headstrong, larger than life individual who was way ahead of her time, its evident she warrants more international prestige. As such, this is a daunting role for any actor but Keira Knightley constructs a changing, multifaceted performance, not only as a fantastic portrayal of someone aging from girl to woman but a wonderful and very real-feeling representation of an individual discovering who they truly are and the confidence they attain from it. A lot of this has been done through subtle gestures and physicality as Colette starts the film with a shrinking almost apologetic nervousness before adopting more self-assurance and typically masculine postures. But while Colette shifts and grows, Willy is unchanging, he starts out a brute and ends a brute, the only difference is that we, as the audience, learn with Colette over time that this is neither acceptable nor necessary. And this could have very easily been played up to extreme, quite literal, moustache-twirling villainy (as it was in Big Eyes) but there is a vitally important level of charm and charisma in West’s performance that explains how he was able to manipulate Colette for so long and so flagrantly abusively without either Colette or the audience completely turning on him until the story requires it.

It goes without saying that any period drama has a level of production above most others. Of course costume, hair, make-up, sets and locations are all vital components on any film but for a period film they bring their own set of unique challenges. More than that, Colette spans through a handful of formative decades which require the architectural and fashion styles to evolve with the passing time. While this could have the potential to feel jarring or clumsy, Westmoreland’s decisions to subtly morph the contents of Willy and Colette’s flat, merely introducing new elements rather than completely overhauling the whole space, to introduce new characters organically and having Thomas Adès’ beautiful score gently traverse through the musical trends of the time, adopting rising styles and themes of the day, allow the film to flow pleasingly from start to finish.

One of the only real negatives I could observe is that this is very much a film of lead and co-lead. No matter the gravity or import on the story, the supporting roles are confined to simply that. This is a combination of the usual factors of timing and pacing but also, as Colette herself becomes more willful and independent, to shine too brightly a light on those around her would rob the character of her own agency. Furthermore, the film also falls into the semi-risky trappings of telling a significant story about one of France’s most celebrated authors in English with English actors. And yet, reflective of our times and audience inclinations, without these, it may not get the spotlight it rightly deserves – after all, this film was initially scripted back in 2001 and has been in production hell for the better part of a decade and a half.

One of the many frustrations of glacial progress is seeing that we have already had prominent examples throughout our history yet the same battles are still being fought. Thankfully it feels like mainstream western society has had a bit of a renaissance with both the LGBTQ+ community and gender equality; subsequently, this won’t be the last film to address the unseen heroes and trail blazers of the past and as long as these stories continue to be told with skill and passion, hopefully lasting societal change can be made.

The Scene To Look Out For:
About a third of the way into the movie, Colette and her fellow factory writer (as Willy’s ghost writers were known) are visiting a rather curious type of mime called a cantomime, wherein a male mime artist very skillfully lip-syncs a sung performance with elaborate gestures. It felt like a key turning point for the story as we see not only a form of theatricality that thrilled our heroine but also a nice little parallel of the film itself. Here we are shown a very impressive front-facing act from a man but in fairness, the genuine talent is from the woman singing the aria next to him, while everyone present applauds just the surface output despite knowing the truth of the matter.

Notable Characters:
There is no doubt that this is a film with an exceptional lead performance from Knightley. It will very likely earn her several nominations and I wouldn’t be surprised if a few lofty awards are sent her way (and deservedly so). But I was genuinely taken by the attention to diversity of the cast. This is Paris in the turn of the 20th century, a hub of life and activity and colonial influence. Over the decades, we have white-washed the past, presenting an inaccurate mono-ethnic presence, so to see so many people of colour in positions of success and sufficiency in a European period film was very rewarding.

Highlighted Quote:
“I will continue to pursue this because I want to”

In A Few Words:
“A stunningly crafted and superbly acted tale of a pioneer who should imbue others with assuredness and pride”