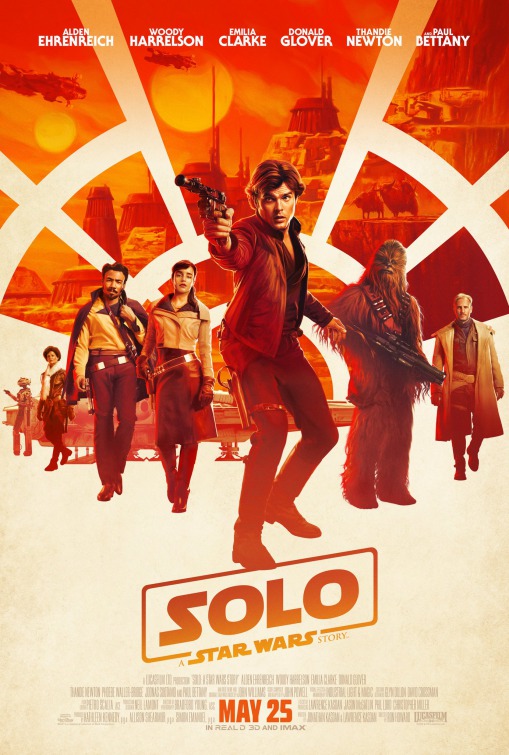 Set years before the events of Star Wars, we are introduced to a young impoverished Han [Ehrenreich], making his way on the Imperial controlled planet Corellia with his girlfriend and accomplice, Qi’ra [Clarke]. Han manages to escape but Qi’ra is trapped and as she is dragged away, Han vows to return and save her. To avoid being caught, Han takes on the new surname of Solo and enlists with the Empire. Years later, caught up in a siege on an alien world, Solo meets a group of thieves, led by the charming but dastardly Tobias Beckett [Harrelson], and bargains his way on to their latest heist with the help of a newly-liberated slave, Chewbacca [Suotamo].

Before we crack on with this review, we need to cover a bit of history. In addition to the central saga of Star Wars films, Disney announced they were going to be releasing anthology stories that explored established characters and introduced all new characters, planets and factions. Thus far, we have had Rogue One which was a big success but recently it has been revealed how much of a nightmare the production was – which came across through the plot-holes, heavy reshoots and trailers littered with footage that never appeared in the film. But Solo goes back further as George Lucas was working on the idea for this film before he sold the Star Wars property to Disney; which makes a lot of sense considering Lucas’ obsession with connecting a vast universe to a handful of individuals. Directors Lord and Miller were put in charge of the project but heavily argued they were making an improv-heavy straight comedy, leading to them being effectively fired six months into the shoot. This resulted in Ron Howard being brought in to reshoot a good 70% of the film with an established cast and script. You may be asking the relevance of all this but it is important because for everything that went wrong behind the scenes on this film, it’s a genuine testament to everyone involved that a) the movie was completed and b) it came out as decently as it did. Problems and conflicts of this nature cause ruptures that bleed into the film itself and doom it to failure before it’s even released, add a mixed-bag tone and the hand of Lucas (who, may have birthed this universe but is the culprit of some of its most hideous mistakes) and it could quite easily be an utter travesty but what they have salvaged here is extremely agreeable.

Unlike something along the lines of Blade Runner 2049, Indiana Jones And The Kingdom Of The Crystal Skull or even The Force Awakens, Solo has the frankly impossible task of replicating through recasting; less a handoff and more a comparative piece which rarely sits well with audiences and their myriad preconceptions. To my mind, the most recent example of a successfully duplicated property counterpart is actually Star Trek and for the most part Solo performs admirably. Admittedly, of the new cast members, the highest levels of scrutiny will be reserved for Ehrenreich and Glover. Although it didn’t come over brilliantly in the marketing material, Ehrenreich conveys the necessary confidence and swagger that Harrison Ford brings to almost every role but the iconic sardonic cynicism (verging on bored apathy) is absent. I can understand the logic for this, as a bitter older man is hardly born bitter, but there was a fear that this would fail to generate the familiarity audiences have with the character. Thankfully, Ehrenreich performs commendably and with enough charm to bring a new side to the character – in the same way that Ewan McGregor did in the prequels. Purists will never be satisfied but for an impossible task, he’s come out in a strong place. Then we have Donald Glover as Lando, the role famously performed by Billy Dee Williams. Glover is not only the obvious casting choice, he is the reason I wanted to see this film. The man does such a wonderful job of bringing the smooth, charismatic and self-assured pirate to life and my only complaint is that his role was so small. I may not have cared for a Solo spin-off (because how much story is left to tell?) but a Lando film charting the story of pirate to captain of industry to military general, starring Glover? I would be first in line.

**quite a few spoilers toward the end of this paragraph**
For all the positives, this film is far from devoid of faults. Any feature picked up midway by a new creative will cause an immediate clash of directing styles and is going to feel a little jumbled no matter the talent involved. Subsequently, there is a lot of fallout that never gets properly resolved, from small things like the excessive use of conversational transitions (where a conversation starts in one place and is finished in the next scene in an entirely new location) to a subplot about droid rights which is interesting but is also weirdly – and somewhat dismissively – executed. The most apparent example of this unsettling air of unevenness is in the supporting characterisation; specifically Dryden Vos and Enfys Nest. While I would highlight both as really solid performances and interesting characters, their existence feels like the product of adjustment and course correction. Firstly we have Paul Bettany, who plays the gangster villain Vos well, but his threat level degrades quickly to the point of irrelevance. It has been mentioned that the original actor was intended to be brought to life as a motion-capture alien-humanoid but scheduling conflicts led to the entire part being rewritten and Bettany being brought on board. For an example of what I mean, Vos is described as a formidable force who will hunt you to the end of the universe for crossing him but not only is he outfoxed by a simple deception, his supposedly vast army is merely a dozen easily tricked subordinates. Speaking of which, both Beckett and Vos have an adversary in the form of marauders led by the heavily armoured Enfys Nest. Now, I know the Enfys Nest identity reveal was supposed to be “but you’re just a kid” but because of Star Wars lore and the importance placed on bloody parents and siblings, I was expecting something bigger and more connected; that this is Phasma’s mother or something stupid. Admittedly the disconnected nature of Jyn Erso in Rogue One should have taught audiences not to expect these threads of association but Star Wars fans can’t help but draw patterns and links where there are none. And while I could have left that as it was, as the seeds of something yet to come, the film then dismisses that entire mindset with the BIG reveal (the one that was pushed throughout with coy mentions of “you know who I work for” and “there are more dangerous people in this galaxy than Dryden Vos” etc) which couldn’t be more connected to the expanded universe and will be such a huge talking point for fans.

While several creative changes may have shifted during production, one that would have been past the point of no return is the production design. The amount of work, effort and money that goes in to getting things like costume and casting sorted is a very difficult train to derail but in fairness, the level of detail and design that has gone into the world building/expansion is extremely positive and praiseworthy. Nothing on this film feels rushed or cheap, every frame is flowing with intrigue and oddities – as all Star Wars films should. On top of that, everything is shot beautifully and Bradford Young has done a wondrous job created a dark, murky side of space largely unseen in the main saga. And, as with the casting, John Powell has the extremely unenviable task of making his mark on the Star Wars brand and what we are given with the musical score is perfectly fitting, the John Williams recycling is to be expected but the Marauders theme was particularly pleasing.

I said in my review for The Last Jedi that these indulgence pieces are for anyone who wants to savour nostalgia over progress (not an attack, just an observation) and would a story about Han Solo’s younger years appease, assuage or entertain them? In truth, I don’t know the answer. I feel there are probably too many unanswered questions, a wall of irritating sequel secrets and future developments have been erected but who knows how, when or if they will be addressed and the overall narrative could be described as predictable, formulaic and straight-forward with a tick-box of character components based on peripheral props and throwaway lines three 40 year old films. And yet it works. There are things that mainstream audiences may find uninteresting or convoluted (in terms of delving into the expanded universe) and there will be contradictions, alterations and inclusions that will irk hardcore Star Wars fans. To my mind, this film achieves the insurmountable by taking an extremely well-known character and producing a fun space pirating romp in spite of all the production dramas but the problem with all prequels is that they remove the veil of mystery and quantify the sum parts, leaving us with answers that can feel unfulfilling, like an explorer completing a map and realising there is no more unknown left to discover.

The Scene To Look Out For:
One of the main exciting set-pieces chocked with visual flare and high-stakes adventure is the Kessel Run; a maelstrom of space storms surrounding several resource-rich planets. Navigation of this particular sector of space is extremely difficult due to the multiple hyperspace jumps that need to be precisely co-ordinated, or face obliteration at the mercy of the unknown. On paper this is great science fiction stuff paired with classic high-seas adventure writing. And yet, the reason I am highlighting it, is the obsession of making things fit. Almost every single aspect of the expanded universe stems from a small handful of lines uttered in the original films and one of those is Han’s claim to Luke Skywalker that the Millennium Falcon “made the Kessel Run in less than twelve parsecs.” When it was pointed out years later that this is in fact erroneous, fans made it work, concocting a workaround which define the Kessel Run as an example of Han’s expertise as a pilot, rather than his speed. Admittedly, it strengthens the character but also causes the bite of the original statement to feel a touch lacklustre.. and all because George Lucas didn’t understand a parsec measures distance not time. The knock on effect of such a simple screenwriting action in the late 1970s is truly astonishing.

Notable Characters:
In a strange way, the only returning member of the principal cast is Suotamo as Chewbacca – as he worked with his counterpart Peter Mayhew on the most recent Star Wars films. Not only does he perform admirably on his own in this outing, we experience more of a connection between Han and Chewie than han and Qi’ra; something I should be miffed about but ultimately works because that’s the relationship we know and wanted to see more of.

Highlighted Quote:
“You just lost the canon.. and I really hurt my thumbs”

In A Few Words:
“A rather impressive feat considering the production difficulties and while it is fairly tame and vanilla, it adds enough to the Star Wars universe to warrant its own existence”