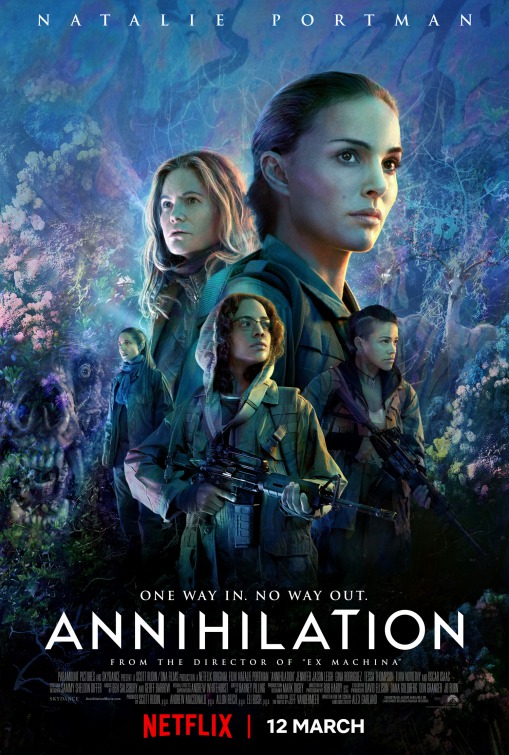 A year after her husband goes missing, cellular biology professor Lena [Portman] is brought to a facility known as Area X. There she meets psychologist Dr Ventress [Jason Leigh] who explains that an asteroid has hit and a dome of iridescent light is spreading from the source. Several teams have entered what they call the shimmer but none of have returned, except Lena’s husband Kane [Isaac]. Desperate to unearth what has happened, Dr Ventress assembles a team and heads into the shimmer, where time and more importantly DNA all seem to be affected.

Despite sharing the title and premise of Jeff VanderMeer’s novel, there is a distinct separation from the books. Subsequently this version is very much inspired by the concept rather than a straight adaptation and in terms of building tension and disorientation and feels like a mixture of Arrival, The Thing, Event Horizon, Under The Skin, Apocalypse Now and Lovecraft’s The Colour Out Of Space. Much like that plethora of titles, the audience is as clueless as to what’s happening as the characters and even by the close of the feature there are so many questions and ideas that need to be pored over but viewers may never reach a complete consensus. That narrative replication of a discombobulated environment is hardly new but it’s refreshingly bold considering how hesitant films can be to trust an audience. As a fan of challenging cinema that refuses to pander to viewers, this really is my kind of feature.

From the marketing alone, it’s evident that Annihilation is undeniably pretty. Presenting amazing cinematography, brilliant direction, captivating production design and a unique visual style, this is colourful, disturbingly beautiful science fiction, making a refreshing change to the desaturated wastelands of late. Everything about this film screams “look at me” to ensure it has your utmost and complete attention, knowing full-well that you will need it to process the dream-like structure of the story. But considering the projects that Garland has worked on, as writer and director respectively, that merely goes with the territory. I am big fan of this mid-budget semi-independent level cinema which has enough room to create something innovative as well as the money to back it up and Garland has proved himself a masterful director of the contained; layering visual clues throughout, narrowing focus and drawing you in before eventually realising how lost you are in this dangerous world (even as a spectator). To my mind, Garland’s work feels reminiscent of the early releases of Werner Herzog and Darren Aronofsky yet I feel he will eventually break away from these comparisons and surpass them in terms of unwavering quality.

As mentioned above, every single component of this release works in absolute harmony. In addition to the visuals, the sound design is mesmerising and while these things can elude an audience’s conscious focus, the music is something they tend to be more distinctly aware of. Ben Salisbury and Geoff Barrow are obvious choices after their sublime work on Ex Machina and the concept behind the score is a magnificent one. From the outset we are treated to something simple, a lone acoustic guitar with gentle backing. It feels very humble and relatable, an instrument one can (arguably) easily learn to play and one which has been part of our culture as a species for hundreds of years in one form or another. The deeper we traverse into the shimmer, the score then changes and warps with the visuals, taking something recognisable and synthesising it to something digital and otherworldly. It’s a breath-taking use of music which heightens the narrative and a masterclass in the importance of harmony between visual and audio.

As mentioned before, Garland’s projects tend to be quite contained and always push interesting characters that feel, for lack of a better word, real. And while I can’t believe this is a sentence I still need to type in 2018, he writes them excellently and believably regardless of gender or ethnicity. Now, I’m not saying he’s setting out to portray groups, quite the opposite, I’m saying it’s nice to see that in each of his films there has been a level of diversity which neither defines the character nor feels like a token consolation. In other words, a character is presented for the importance they play to the narrative as opposed to an exaggerated stereotypical portrayal for the sake of it. But I digress, the point I’m trying to get across is this amazing cast impresses throughout and the group dynamic is a wonderful and engaging one. My only gripe – possibly the only one I have with the film as a whole – is the nature of casting the more prominent actors by screen-time; in other words, the more prolific the actor, the more likely they’ll live until the end, allowing a sharp audience member to rack up a reliable dead-pool with ease.

If it wasn’t already evident, I really enjoyed this feature, partly for the huge spectacle and mystery of it all, partly for the little things. For example, the parallels between the loss of identity and being consumed by dementia or cancer is a prime example of the power of science fiction; to take a terrifying and untranslatable concept and present it subtly for all to absorb. Powerfully thematic, alluringly captivating and enticingly deep, Annihilation is a fantastic feature full of probing questions but very reticent with answers; depending on what kind of film fan you are, that may charm or irritate you.

The Scene To Look Out For:
**major spoilers within**
I’ve been told that the scene in the lighthouse does not take place in the book and is entirely of Garland’s construction. In a way, that makes sense as it lends itself to a visual medium in the best way, relying on dialogue-free physicality, like a mimicry ballet. Taking humanoid form, the slick alien being learns from Lena by copying her movement, from stepping around the room to returning a physical attack. It’s a beautiful and somewhat terrifying performance, if only because the alien is without form and feels more like a marionette than a sentient being with actual wants. Simply, creepy and transfixing.

Notable Characters:
Although not explored as much as I would have liked, Jennifer Jason Leigh’s character is a sharply interesting individual, a woman of drive and resolve who seems to be almost without empathy but it is only through dialogue that we come to understand her motives and reasoning.

Highlighted Quote:
“The shimmer is a prism but it refracts everything”

In A Few Words:
“High-concept science fiction as it should be: spellbinding, poignant and mystifying”